Unless they’ve got diamonds 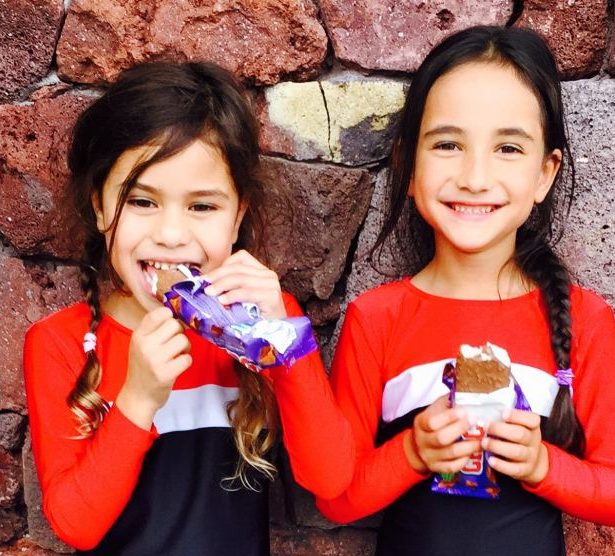 Two thirds of the panel of philosophers: Kurawaka Morrison and Manawanui Maniapoto-Mills

On April 30, back in 1975, the Americans pulled their last 10 marines out of Saigon. And May 8 will mark the official end of World War Two in Europe. Now, I know all this because our six year-old came home this week with homework about war.

One of the questions was this: “Why do people go to war?” Manawanui had a triumphant answer.

I didn’t have the heart to say OIL. Or money. She wouldn’t get that. She’d probably think grown-ups wouldn’t be so crass. Then I’d have to tell her that the grown-ups in charge of wars today do think like that.

Not her Koro Nepia, who was a soldier in Korea. And not her koro’s uncle, Lieutenant Hupa Hamiora, who died at the battle of El Alamein on July 5, 1942, aged only 34.

Back in the day, our tupuna were pretty clear about what was worth fighting and dying for. Women and land, they said. He wāhine, he whenua, ka ngaro te tangata. But let’s be real. They fought over dumb stuff too. Back then, you had to sleep with one eye open.

One of the topics in Manawanui’s homework book was about going to war. There were Māori leaders who thought Māori shouldn’t be going overseas to war. Some Pakeha didn’t want to go to war either. The funny thing about “fighting for freedom” is that it doesn’t always include the freedom not to fight. New Zealand has had its fair share of court-martials and executions because of that. The six year-old reckons people shouldn’t have to go to war “because you can die.”

The Vietnam War began in 1959. It was also known as the Second Indochina War and the Vietnam Conflict. But in Vietnam, apparently, it was just called the American War.

Before that was the Korean War. Our father signed up because his mate did.

“We didn’t know what to expect when we went away. I don’t think we ever thought about it. Not many of us would have known much about the Korean War when we enlisted. We knew that, in 1950, the Korean People’s Army invaded South Korea and that the United Nations forces became involved. We felt proud that we were serving our country.”

That’s what he wrote to us. But, of course, none of us ever thought to question our father over that. Korea was something B.C. Or B.K. “Before Kids.”

Over the last couple of years, ANZAC Day seems to have got bigger than a breadbox.

This ANZAC Day, as everyone was reflecting on the carnage of previous wars, New Zealand troops flew out to another one. Our media found out, in an old-fashioned way, exactly where our guys were stationed. In a Saudi newspaper. The “secret” must have been something to do with Club rules.

Our PM is flogging off sheep to a Club member known for state-sanctioned beheadings and crucifixions. Hilary Clinton expressed another concern in an email revealed by Wikileaks. She said “donors in Saudi Arabia constituted the most significant source of funding to Sunni terrorist groups.” Now our soldiers head into the madness others have created?

Not long ago, when I was in Croatia with our six year-old and her dad, I bought Madness Visible: a Memoir of War (Janine di Giovanni). It’s about the Balkan wars, and it’s hands-down the most harrowing and disturbing book I’ve ever read. It raises the question, among others, of what causes neighbours, whose families have lived peacefully for centuries, to turn against each other with such mindless brutality?

I got talking with a young woman whose father fought in the Siege of Dubrovnik in 1992. And I asked her how could they go back to normal after a war? She shrugged. “We don’t talk about it.”

Not so in Germany.

This week a new museum opened in Munich. The Munich Documentation Centre for the History of National Socialism will be a central place of learning and remembrance that will address the city’s National Socialist past and the ramifications of Nazi dictatorship.

It’s aiming to prompt a “free and open debate” about Munich’s role – and to look at the teaching of human and civic rights.

Do you think we ever learn though?

Week by week, the news is full of Syria, Afghanistan, Pakistan, Somalia, the Congo, South Sudan, Yemen, Palestine, Ukraine, Nigeria, Indonesia and West Papua… conflicts over oil, territory, religion and ethnicity. Millions of refugees are fleeing their countries. Can you imagine how desperate a family must be to flee from Syria to Iraq? Children younger than mine draw pictures of soldiers holding machine guns and bombs exploding.

When I asked the six year-old that question, she said: “Nothing.”

So I put some questions to a panel of them – a panel of very junior philosophers.

I asked them what FREEDOM is.

It’s when you can do what you like, according to Manawanui, Kurawaka and Hawaiki.

Is it okay for people to take something from someone else just because they really like it?

Is it okay to invade another country?

Unless they’ve got diamonds, says Kurawaka.

Or something you need because without it your people will die, says Hawaiki.

But, he reiterates, you can only take some of it. Not all of it.

What can you do instead of going to war, I ask the six year-old.

“Use your words,” she says.