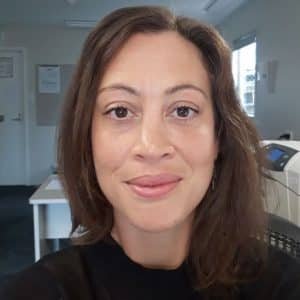 I grew up in a predominantly Pākehā town in the South Island. My mother is Pākehā. My father, who had Ngāti Kuia and Rangitāne whakapapa, was killed when I was seven. Mum juggled postal work while she raised me and my sister on her own — and in the school holidays, she’d ship me off to Nelson to reconnect with Dad’s side.

As the older child, it helped that I tried not to rock the boat.

It also helped that I knew how to get on at school. By the time I got to Marlborough Girls’ College, I understood the unspoken rules. Fail and you’re seen as just another Māori. Succeed and you’re just like everyone else.

I wanted to be like everyone else, so I did what I had to do to fit in with the mainstream at school.

For me, this meant not engaging with things Māori, and avoiding the places where large groups of Māori girls sat during break times because I didn’t want to be branded as a troublemaker.

This wasn’t a problem when I became a senior student — because all those girls had left school by then.

Real Māori, I thought, were tough, got into trouble in class, had boyfriends, and did adult stuff in the weekend. I was a sellout.

Being Māori in a state-run institution means you’re often a square peg trying to fit into a round hole. You learn how to slide in neatly. Or else you don’t, and you become a “problem”.

Alternatively, you don’t slide in neatly, but you learn how to fit. And in doing so, you learn how to ignore or suppress the parts of yourself that don’t correspond with the institution — and maybe come to think that something about yourself isn’t quite right.

I’m a PhD student now — and before then, I was a secondary school English teacher for 11 years.

For the past five years, I’ve been studying institutional racism in the New Zealand secondary school system. And it saddens me that the inner turmoil I began experiencing as a student 25 years ago is still evident among Māori students today.

When I started teaching, I again saw how Māori students roll with the way the school system positions them, because they aren’t presented with any other choice.

I remember a conversation with a talented Māori student called Selina. We talked after a class discussion about making te reo Māori compulsory in New Zealand schools. Most of the students had recoiled at the idea. They’d argued that Māori wasn’t relevant to them personally, and it wasn’t spoken in other countries. They had their OE travels to think about, after all.

While this issue generated a lot of discussion among the Pākehā students, Selina and two other Māori girls at her table were quiet. Towards the end of one of my big spiels about biculturalism and notions of partnership, Selina yelled out: “It’ll never happen, Miss.”

Afterwards, when the rest of the class had gone, Selina spoke about how it felt to sit between cultures — and to feel torn. She told me that she didn’t fit the school’s perception about what it means to be Māori, so she’d resolved to think of herself as a Kiwi.

I’ve worked in low-decile schools with a large proportion of Māori students. There it was considered an achievement to get eight literacy credits for one year’s work. In Selina’s school — a well-heeled, co-ed secondary school in Wellington where Māori are a minority — the students were expected to get more than 20.

These kinds of teaching experiences are reflected in research which shows that state education gives special encouragement to the dominant culture in the New Zealand secondary school system and society.

Mainstream New Zealanders, however, rarely talk about the ongoing implications of colonisation and race. Many Pākehā would rather pretend that this issue doesn’t exist.

Stories about racial injustice in state institutions are no great surprise if you’re Māori, because you have stories of your own — although maybe you don’t think these stories are of any value.

In a society that doesn’t like talking about race and racism, this perception is unsurprising. In fact, these stories have great power because they speak of oppression and racial inequality.

For me, the most healing aspect of study has been learning to see myself within a network of power relations. I now understand that the deficiencies I saw in myself for not “acting as” or “being” a certain type of Māori come from the systems and structures that keep mainstream New Zealand functioning.

Understanding the structural implications of race is empowering. It opens up spaces in your everyday life to question how you’re positioned by society, and it can help you face your future as Māori with more certainty.

It’s a process that helps you see the contemporary structures of colonialism. But, like all power struggles, institutional racism is slippery. It’s always changing. Never defeated.

Recently, I was at an overseas conference about institutional racism and was surprised that, even in this forum, racially marginalised peoples were having the terms of their existence dictated by those who are racially privileged.

One of the main conference speakers thought that the best emotion to draw on was “hope”. This view was challenged by an indigenous scholar, whose own personal experiences of institutional racism pointed to the value of “anger”.

As they debated, it was clear that the presenter wouldn’t accept any critique gracefully. She chose instead to defend her non-indigenous stance against a lived indigenous perspective.

This exchange was a lightbulb moment for me. When will the dominant culture take the narratives of racially marginalised peoples seriously? How long do we continue to appeal, fruitlessly, to the white masses in the “hope” that this will result in meaningful change?

History suggests that those who are born into privilege struggle to see how society is structured to their advantage.

I want to hope, but the truth is that I am angry. This anger is fuelled by knowing that many Māori youth today continue to feel inadequate or displaced — or to feel as if something inside them is broken.

I take comfort that e-Tangata opens a space to speak of what it’s like to exist at the margins of mainstream society.

It gives me courage to speak back to institutional racism.