A world of long, long yesterdays 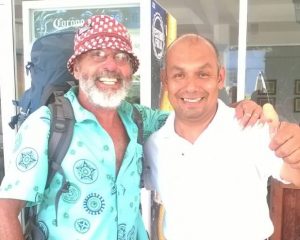 A visit to Mexico gives a Maori writer a new perspective on our young world.

Around the time that Takitimu (my waka) made it to Aotearoa more than a thousand years ago, there had already been 600 years of decline in the sophisticated Indian civilisation based at Teotihuacan, not far from the present-day Mexico City.

According to our family whakapapa, Takitimu straggled behind several other waka which had left Raiatea in the Cook Islands, bound for our shores, around 1355.

But, at Teotihuacan, so the researchers say, things were humming long before that. It was a bustling metropolis with a population of 250,000 – and it had been for more than 1000 years from 5 BC.

Much later, in the 16th century, came the invasion by the Spanish conquerors, the “conquistadors”.

But these days, as many Kiwis have done, you can still climb those Sun and the Moon pyramids at Teotihuacan, along the five kilometre Avenue of the Dead, and get a feel of that ancient American Indian world and the contrast with our youthful New Zealand.

I guess the historic comparison could be seen as the tuakana and the teina. Mexico is old. Not just the dates associated with taonga and habitation but also the whenua itself. It has a timelessness of having been prodded and picked over for centuries without its mauri changing.

This shift is reflected in a relaxed attitude of the people towards working with the land and getting things done. Perhaps it could even be seen as a resignation.

It’s also in the local reo. Manana, the Spanish word for tomorrow, is much more like our apopo, which originally was a time in the future after today – not the tomorrow it’s come to mean in a faster paced society.

And the warm Mexican climate certainly helps to slow down the body and its thinking. But that’s a small part of the shift. I’d say it’s a matter of getting a bigger perspective on life. From that part of the world, the fuss about Treaty settlements seemed petty, and now I’m back home, even more so.

In 1521, the successor civilization to Teotihuacan fell to the Spanish and today’s tangata whenua are still getting over it. The native languages were largely wiped out by Spanish culture, and their minerals and wealth shipped off to Europe to fund the era of colonisation from which New Zealand emerged.

The locals of Mexico ended the Spanish rule in 1821 with their war of independence, but then began their struggle to deal with their emerging northern neighbour, the United States.

I came across a woman street vendor in Mexico City who spoke a language from the south of Mexico. She was bubbly and welcoming and offered the equivalent words in her Zapotec culture for the Spanish numerals I was attempting in order to work out the cost of the kai. Her enthusiasm revealed a mana that had survived colonialism.

I saw glimpses of this throughout our travels from the big smoke and smog of Mexico City to the south Pacific coast of Huatulco and back inland to Oaxaca. Eva, our city host, fiercely resisted the gentrification of her Roma neighbourhood and made sure we got underneath the superficial tourist trappings of Mexican culture. Oscar, the restaurant manager in Huatulco, practised a manaakitanga that could grace any marae.

Juan, our guide to the pyramids of Monte Alban, perched 400 metres above Oaxaca, also revealed the deeper recesses of modern-day Mexicans. He recounted the history of the Zapotec capital that functioned from 500 BC to 750 AD and proudly spoke of how Monte Alban had been a wananga – a place of learning for the district, where midwifery and neurosurgery had been taught. He backed this up by pointing out rock carvings that did look like anatomical drawings.  All this I thought, when my Polynesian ancestors were still island hopping down the Asian peninsula.

Later on, Juan took us to an unfinished stone church which, he said, the Spanish had commissioned Mixtec craftsmen to build. It was never finished because Spanish influenza wiped out most of the Indian population.

Throughout this, three American tourists on the tour kept complaining about costs, the chill of the air-conditioning … anything. And they seemed oblivious to their own country’s continuing exploitation of this ancient Mexican civilization.

When I poked behind Juan’s professional delivery and asked what he thought of the treatment of his people, he said he was showing tourists around the houses of his ancestors.

You got the feeling that for him, the time between yesterday and tomorrow was a very elastic “now” – a “now” that has learned to absorb ups and downs.