The TPPA is a game changer 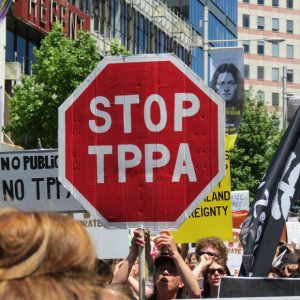 There’s a new treaty in town. It looked as though Waitangi was a game changer in 1840. But this deal is something else again.

Remember how last time Hobson talked up the Treaty and hawked it throughout the country? This new one is secret. No one, except for the negotiating team, has seen the text.

And remember how the British thought the Treaty might be a useful way to cut out the likes of the pesky New Zealand Company? Well, the new one could hand more chunks of the country to big overseas corporations on a plate.

You know how things haven’t worked out at all well for the tangata whenua over the last 175 years? This time it looks as if things could get worse for them – and for a lot of other New Zealanders too.

I’m talking about the Trans-Pacific Partnership Agreement. The TPPA.

And a group of us are so concerned about it that we have asked the Waitangi Tribunal for an urgent hearing on the issue.

For the last five years, the Crown has been hard-out negotiating the TPPA with 11 other countries. It is hopeful that dismantling export barriers will improve New Zealand’s ability to compete within the Asia-Pacific, generating “higher incomes for New Zealanders.” When I hear that kind of talk, I get a flashback to the 1980s and the notion of “level playing fields.” Something did trickle down on to poor folk and it wasn’t wealth.

Trade is good. Māori have always been great traders and entrepreneurs. But the TPPA is not just about trade. It’s about investor rights. Highflyers from at least seven of the dozen countries involved are worried about the impact that the TPPA might have on ordinary people. These include bigwigs in the UN and the World Health Organization (WHO) and jurists and health professionals as well as prominent members of the US Congress (like Senator Elisabeth Warren). Even Joseph Stiglitz, former Chief Economist of the World Bank, has weighed in:

“There is a real risk that it [the TPPA] will benefit the wealthiest sliver of the American and global elite at the expense of everyone else.”

As a Nobel Prize winner, he probably knows a thing or two.

The Crown agrees that “the TPP covers a broad spectrum of issues and interests and will impact on all New Zealanders” and that “this is relevant to the range of factors that must be weighed when assessing the Crown’s kawanatanga obligations as well as its Treaty obligations to Māori.”

So we should just trust the Crown? Despite its track record?

We say that the secrecy surrounding the negotiations is itself a breach of the Treaty obligation to actively engage with Māori. No one has seen the text. Not Māori. Not the health professionals. Or even the Greens, Mana, Labour, Māori, or the NZ First MPs in Parliament.

The negotiators keep saying that, once the agreement is signed, the rest of us will be able to see what’s in it. Ever had anyone sign a contract on your behalf without knowing what’s in it?

All the leaks suggest New Zealand might have to sign an awful lot away in order to flog off a few more bags of milk powder.

You see it’s not just about milk and meat. There is stuff on the table that a lot of people would say has no place in a “trade” deal i.e. intellectual property, financial services, and State Owned Entities. And there are rules so that foreign investors can protect their investments and maximise their profit. That means the stakes are very high.

According to Joshua Freeman (from Doctors for Healthy Trade), “the list of specific concerns [about the TPPA] is long, but the broad concerns are two-fold – healthcare costs would rise, and public health policy would be muzzled.”

Drug companies and even the US Trade Office hate NZ’s Pharmac (our bulk-buyer of pharmaceutical drugs). They think it’s unfair. The TPPA would limit Pharmac’s ability to bargain with drug companies to keep the cost of medicines affordable. And pressure on the nation’s health budget would escalate because of a big push to extend patents. So there could be delayed introduction of generic medicines, and longer exclusive protections for expensive new cancer and immunosuppressant medicines.

Leaked texts also indicate that the TPPA would give exceptional rights and protections to foreign investors. Referring to this phenomenon, the Director General of the WHO stated earlier this year:

“One particularly disturbing trend is the use of foreign investment agreements to handcuff governments and restrict their policy space. … In my view, something is fundamentally wrong in this world when a corporation can challenge government policies introduced to protect the public from a product that kills.”

In other words, there would be handcuffs on future governments when they make policy and pass laws to protect our land, ocean and health.

You see, under the TPPA, foreign investors would be able to sue the Government in private offshore tribunals if it makes changes to health or environment policy that will affect an investment – like significantly reducing projected profits. The corporations could seek many millions in compensation.

This kind of thing already happens under similar agreements. Germany was sued after the government decided to dismantle its nuclear reactors post-Fukushima. In El Salvador, the government refused to issue new mining permits after its water was polluted, and a company that had already started its environmental due diligence sued for over $300 million.

Okay. Companies suing governments isn’t new. And New Zealand has few of these agreements anyway. So do we really want to handcuff our future governments by signing more of them, especially with the US?

What if our courts declared that a foreign resort developer ought to pay costs for damage to wāhi tapu? What if New Zealand passed new laws against genetically modified kai? What if we wanted to combat obesity by putting graphic warnings on food with high sugar content, as we do with tobacco? And what say New Zealanders agreed that there had to be new big, fat insurance deposits made by oil companies in case of spills? Say a company from a TPPA state was granted an exploration licence for deep sea drilling and a court ruled that iwi had a right of veto in any permit process?

Would any of those trigger a dispute? And what could be the consequences?

New Zealand could end up in one of those dodgy offshore “investor state dispute tribunals” like Canada or El Salvador. Or our government could be so nervy it avoids making any decisions or new regulations that would upset its TPPA whānau.

You see that’s the handcuff effect. There is real potential for constraints on our government’s policy and lawmaking ability. So you have to ask – who will be running the show if it’s not our government?

And that brings us right back to that first Treaty. We, as claimants, assert that the biggest drama for Māori is the potential tension between the Crown’s obligations under the Treaty of Waitangi versus New Zealand’s obligations under this mega free trade & investment agreement, the TPPA.

If the Crown binds itself, under the TPPA, to obligations that are likely to be inconsistent with the Treaty, it effectively cuts off any ability for Māori to seek remedies for breaches in the future.

Six claimant groups to the Waitangi Tribunal say the obligation of the Crown is more than just putting general information out there. We say it has to pro-actively consult with Māori so it can make informed decisions. There’s no evidence of a risk assessment of the TPPA’s impact upon the Treaty – or anything else for that matter. Health professionals around the world are saying that, prior to any agreement being signed, it is essential that an independent, publicly released, and comprehensive health impact assessment be performed.

The Crown asserts that claimants and the Tribunal cannot “jump to conclusions” without more information.

A lack of information is precisely why we are seeking urgency to require the Crown to actively engage and protect our rights before the TPPA’s a done deal.

Wai2522 is an application to the Waitangi Tribunal for an urgent hearing. It was filed by Papaarangi M J Reid, Moana Jackson, Angeline Greensill, Hone Pani Tamati Waka Nene Harawira, Rikirangi Gage and Moana Maniapoto. There are now six separate claims and 11 other groups who have registered as interested parties with the Waitangi Tribunal.