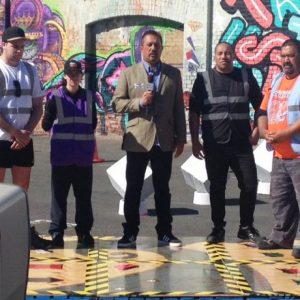 Mike King, the ringmaster, and four of the contestants

Our family is one where the male doesn’t automatically take charge of fixing the things that go bung around the house, or of reading the fine print and then,  just like a pro,  installing new gadgets.

In our case, that’s because I don’t have much aptitude for that sort of stuff – whereas my wife has. So, generally, she’s the household’s handyman. She comes from a Dally family where they were all good at that.

I do have a go at the odd handyman project but we both know that my efforts will end not so much in tears, but in swears.  That’s for sure.

I reckon that, like with some of my mates who aren’t much help around the house, there’s a gene missing in us. Our DNA hasn’t programmed us to have tutu fingers.

I know a Maori bloke who has that tutu gene. He now runs an engineering firm with 40 people working there.

He says he got a handle on how to use all the gear in the factory when he was doing his apprenticeship. He’d get all his work done as quick as he could – and then have a tutu on the other equipment.

He got to the stage where he knew the ins and outs of all the gear and, when he became the boss, there was nothing much about the operation that he didn’t know. First hand.

He ties in nicely with the view that us Maori guys all have a knack with machinery.

My own shortcomings are a reminder that the knack isn’t universal in the Maori world. But I’ve just been lending a hand with a project that is going to give TV viewers a glimpse of the special, almost breath-taking, skill among those who, for a living, drive trucks and diggers and bulldozers and graders and tractors … and you name it.

The glimpse will be on MTS, the Maori channel, in a series focussing on a competition for fork lift drivers.

The contest was dreamed up by Brendon Butt, a Ngati Pukeko man, now Dunedin-based, who’s been a real achiever in television for many years.

There are five  drivers competing: A 54 year-old, Harley-riding, timber mill worker from Rotorua, a dancing muso from Nga Rauru who moves milk products around on the Tauranga wharf, a 23 year old ex-salt mine worker from Raukawa, a graffiti-artist turned Placemakers yardman, and a petite, polite Pakeha mother of three from a chocolate factory in Dunedin.

Not a lot in common except that they can all operate their machines with the delicacy and precision that surgeons or concert pianists use in their line of work.

The competition has them rearranging anything from seriously heavyweight stuff, to loaded pallets (which I suppose is their bread and butter work), and all the way down to tiny items that you’d think would be much too delicate for their machines.

They need to keep zooming around at high speed too because, as in shearing contests, time is a factor as well as the quality of the workmanship.

And there they are with their left hand controlling the steering wheel of their fork lifts while their right hand is in charge of the levers and buttons that determine what fancy manoeuvres the forks and boom and tines are required to perform.

Obviously, Maori don’t have a monopoly on this kind of work and on skills like these.

But it’s a nice touch by MTS to find such an entertaining way of paying attention to talents we benefit from but don’t get to see or appreciate.