In the mould of Benji and Shaun 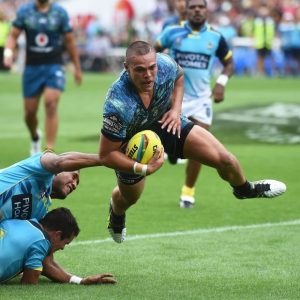 Twenty years ago, the Auckland Warriors – as they were then – took their first step into the professional world of Australian rugby league. Their debut match was against the Brisbane Broncos at Mt Smart Stadium and the locals fielded a line-up that included Dean Bell, Stephen Kearney, Hitro Okesene, Sean Hoppe, Duane Mann, Tony Tatupu and a couple of Aussie imports – Greg Alexander and Phil Blake.

There was disappointment, though, for the 30,000 fans because the Warriors didn’t quite make it. They went down 25-22.

Tuimoala Lolohea wasn’t all that fussed about the result though, which perhaps is understandable. He was six weeks old at the time.

He’s taking more interest these days though. And, in a club with a reputation for producing young talent, Tui has stood out. In his first season with the under-20 team, he scored 22 tries. Last year he had a taste of NRL first grade – and now he has a chance to cement a place in the top squad.

Here he fields a few questions on his background.

When you were a kid, which players were catching your eye?

I looked up to Benji Marshall. And then growing up, playing footy more often, it was Shaun Johnson. We pretty much all play a similar game – with the step and the speed.

I used to do athletics as a little kid and was alright on the track. But it’s different when you’re on the field coping with fatigue and stuff.

How are you stacking up against the real speedsters in the Warriors? Like Shaun Johnson, Konrad Hurrell and Glen Fisiiahi?

Oh, yeah, they’re quite fast. Even when they’re tired, those guys are still quick. It’s hard to tell where I’m placed. Probably fifth or so at the club. Somewhere around there.

You did really well in the NYC (under 20 competition) a couple of seasons back and you were young enough to play there again last year. But you mostly played NSW Cup (reserve grade). What was the thinking there?

Starting off in the NYC playing against boys, and then stepping up to NSW Cup and playing against men, it gets you physically set. It was a big jump in my career. And then playing first grade was another step, with the speed and the physicality. But it’s something I want.

How big are you?

Yeah, but if the Warriors want me to play in another position on the field, I’m willing to do that.

I hear you went alright as a Sevens rugby union player too?

I played Sevens at school. I think that’s my kind of style. Like Shaun and Benji – you know, touch players. Sevens is almost the same thing. You’ve got so much space. And when you have some speed and a step, that’s just something you enjoy.

You made you first grade debut against Manly last July. What did you learn from that?

It’s quick… it’s quick. I was expecting it to be quick but, when I got on, my lungs were going. And it’s physical. Those were the two main things.

A number of Kiwi kids go to Australia to try and crack the NRL, but you’ve been able to do that from home. Has that been a nice way to go about things?

I had an offer from another club, but my dad and I talked about it. I wanted to stay here. I thought it was just too early for me to move away to Australia. It’s good being at the Warriors.

You’re a flashy sort of player, but you have some hard workers around you at the club. How have those guys rubbed off on you?

It makes you physical – in your mind anyway – especially being around Ruben (Wiki). He does all his workouts with you and, it’s not easy, but I guess that’s just preparing yourself for the NRL and the physicality.