Yep. They went and did it 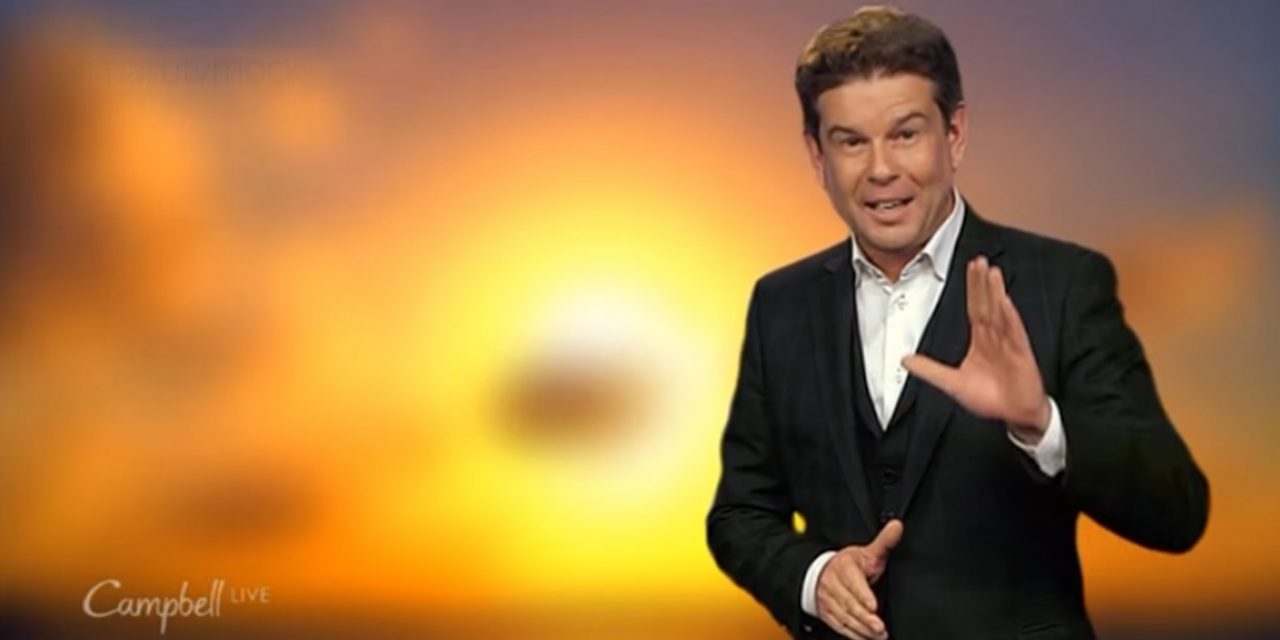 The axing of Campbell Live and the loss of John Campbell is a blow for those television viewers who respect and expect some guts and heart in their current affairs programmes. Moana Maniapoto is one of those bemoaning his departure.

So they did it. The announcement hit the news at the same time as the Budget release. What? They thought Campbell Live fans wouldn’t notice? Apparently we’re all reading way too much into the timing. Whatever. Hilary Barry wasn’t the only one who was sad.

John Campbell is said to have rejected an offer from MediaWorks to sign a three-year contract that would see him share the driver’s seat in the usual predictable Ken and Barbie formulaic fashion. What is it with the whole duo thing? Let’s face it. No one is talking about two male presenters. Even if Christie and Weldon teamed JC up with Rachael Smalley or Lisa Owens, it’s the refocus on a move to a “wider mix of stories” that is ominous.

There is a brilliant team at Campbell Live, but jobs will go. And I fear the meaty stories will be sandwiched in between dogs on surfboards and interviews with the winner of the most recent reality show. Better for JC to leave with dignity than to morph into mediocrity. After all, it is his name on the masthead.

A lot of water has gone under the bridge since the early, heady days of TV3’s big burst on to the scene. It was the cash-strapped, edgy underdog snapping at the heels of the Establishment with its mix of New Zealand productions.

Back then, Rex Simpson ran Kids TV that fed a stable of great, homegrown programmes into TV3. They included You & Me, Short Sportz, Early Bird Show and Coca Cola TVFM as well as Yahoo, which I co-hosted with Phil Keoghan. Tukoroirangi Morgan was a journalist on TV3 news then, while TV3’s Nightline included Joanna Paul and Belinda Todd. Two female presenters. The Māori one said “Kia ora” and the other whatever popped into her head.

In 2005, Campbell Live hit the screens. JC didn’t always get it right. I thought his interview with Hannah Tamaki left a lot to be desired. But he gave her plenty of air-time at the end to speak her mind, where others wouldn’t have done so.

I’ve watched the show religiously for the last five years. Advocacy journalism? Great. Couldn’t believe it when I heard it was getting the chop. It put me in such a foul mood. It’s like I’m taking it personal, maybe because they did such a good job of connecting me to some of their stories.

On Tuesday night, I learned that the Syrian war has almost produced the same number of homeless as the population of New Zealand. And, when Campbell Live made the link between the refugee camps and New Zealand’s place on the Security Council (nicely editing in a cut from the PM about how our role is to “shine a light”) and New Zealand’s refugee intake numbers, well, I figured the team was reconciled to the execution block and was thinking: “Damn it. Let’s go out with a bang.”

So at 7.30pm, I reach for the remote. And that’s when things start to go belly up. I don’t want to watch Aussies frisk moron drivers or see someone’s custard curdling. Or watch bloody X-factor, even if it is the finals. I don’t want to watch kapa haka on MTS either. TV is a desert until the Tuesday documentary slot on Māori TV.

There are excellent weekly current affairs programmes. Native Affairs with (shock, horror) a single journalist presenting the show – a Māori woman too. And Media Take, with its brown and white boy team. Hey, MTS. Didn’t you get the memo about the right gender and colour mix? Yes, there’s 360, The Nation, Q&A and Marae hidden away on weekend mornings, but it’s the prime time daily evening slot that’s the one.

I won’t be watching Seven Sharp – now there’s an oxymoron.

Maybe Friday nights on TV3 be replaced by a global tournament where all participants build, chew, warble, drive and pash their way into the annals of the banal? I don’t care. I’ll be switching on to MTS for Te Kaea then Find Me a Maori Bride – the funniest homegrown thing I’ve seen on TV for ages.

Last night we had dinner at a friend’s home in Grey Lynn before driving to Rotorua. It was surprising how often stories from Campbell Live ended up in our conversation as we talked about Auckland’s traffic, unemployment and housing woes.

I’m off to twitter land for my daily fix of current affairs. I tune into R.T, The Atlantic, Al Jazeera and a bunch of journalists like Glenn Greenwald and Jeremy Scahill before I swing back to National Radio. I’ve been boycotting MediaWorks’ Radio Live since the announcement, but I’ll switch back into Willie and Ali one day. It’s hard-going sometimes reading the news feeds that come in from the northern hemisphere and often I can’t bear it.

As a friend said today, news and current affairs is like the veggies on your plate. You don’t necessarily enjoy them. You’re more inclined to reach for the sugary, fatty stuff. But you ingest and digest it because you know it’s good for you.