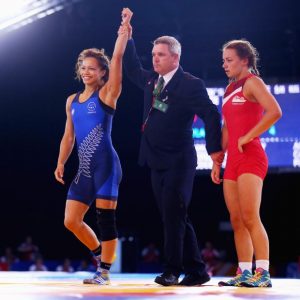 Before the end of this year, Tayla Ford wants to do the splits.

That won’t be her biggest sporting achievement for 2014. Being the first Kiwi woman ever to win a Commonwealth Games wrestling medal, as she did in Glasgow, will be hard to top. But it’d still be significant.

You see, Tayla ruptured her ACL (and messed up the rest of her left knee) playing rugby a few years ago. All that damage wrecked her chances then of qualifying for the London Olympics.

With flexibility critical in top-flight wrestling, Tayla wants a better range of motion to help get her out of tricky spots on the mat and on to the podium at the Rio Olympics in two years.

So, getting her crook knee to cope with the splits isn’t a minor item on her bucket list. It’s a serious goal. It’s one you’d count on her achieving too. The 21-year-old has a reputation for delivering.

Along with her Commonwealth Games wrestling bronze, Tayla has represented Canterbury in rugby and been chosen for a New Zealand 7s training camp. Then she’s been an NZ judo champ and has competed nationally in weight lifting.

“I enjoy the more physical side of things,” she says. “I never played touch rugby. I don’t like touch.

“To stop a person, all you have to do is touch them, whereas in rugby you have to tackle them and physically take them down to the ground.

With Rugby 7s part of the programme for Rio, Tayla could have been shooting for an Olympic spot in that sport rather than wrestling. For four years, she was a wing or centre for the Canterbury schoolgirls’ rugby side. Her speed was a big asset. She was the Canterbury schools’ 100m and 200m champ in her last year at Avonside High – and she later made the senior Canterbury women’s team, both in 7s and 15s. She was called into a wider New Zealand 7s training squad in 2012 as well, but that made her pause.

“I realised I was over committed,” she says. “It was either wrestling or rugby. I chose wrestling.”

Wrestling got a head start on rugby in Tayla’s life. Her dad, Pattrick (a Pakeha from Blenheim) was a wrestler, and Tayla and her brother Alex would tag along with him to training and tournaments.

By the time she was eight, Tayla was getting involved herself. She had to wrestle boys more often than she’d have preferred, but learning to cope with more powerful opponents had its advantages.

And when the first Youth Olympics rolled around in Singapore in 2010, Tayla was 17 and ready to test herself on an international stage. She qualified by winning our nationals and then taking out the Oceania champs.

Her brother narrowly missed out on a Singapore trip though – which gutted both of them. Tayla reckons Alex attempted too much by trying to qualify in different wrestling styles as well as in different weight categories. So she picked up a valuable lesson about focus and specialising. She also well and truly got the wrestling bug – and her seventh placing there whetted her appetite for taking on the best.

Tayla now competes for the Rangiora Wrestling Club alongside her good mate Sam Belkin. He’s bigger than her (hitting about 110kg in the off-season) and quicker too. He also won a Commonwealth medal this year.

“I try and wrestle against him but it doesn’t have much impact,” laughs Tayla.

While you may assume that it’d be superb training to take on big, well-muscled Kiwi blokes, that doesn’t prepare you 100 percent for wrestling females. Tayla points out what you may be overlooking – that girls tend to be much more flexible. So there’s more “give” in their joints and, as a result, less leverage for their opponents.

Also, she says, there’s an advantage in wrestling girls with different styles so that you’re ready for what they may come up with.

“You can’t go out there,” she says, “expecting them to wrestle just like you.”

Weight is another big piece of the wrestling puzzle. Tayla trains at about 65kg, but then drops significantly for big competitions. In Glasgow, for instance, she competed in the under 58kg category. The smaller you are, the smaller the opponents you face too.

So, from up to a month out from competing, Tayla is counting the calories. By the final week before weigh-in, treats are a distant memory and she’s eating only breakfast and then a light snack in the evening. This is while training twice a day. But such are the sacrifices if you want to achieve on sports biggest stages – which Tayla desperately does.

“I want to go to Rio really badly,” she says.

To get there, she’ll need to qualify and that journey could take her via the Marshall Islands, Las Vegas and Egypt for competitions. She’d like to train again in Sweden also.

In the meantime, she’s working as a duty manager in a liquor store and putting some energy into weight lifting. She’s enjoying being the new kid in that sport, rather than the favourite. Weight lifting is helping her get stronger and has improved her posture too.

Down the track, in quieter times, she might get back on a footy field. If so, she’s already on her way to looking the part.

“I’ve got a cauliflower ear just from rubbing in wrestling,” she smiles. “I’ve had it drained after competitions. But I think it looks cool.