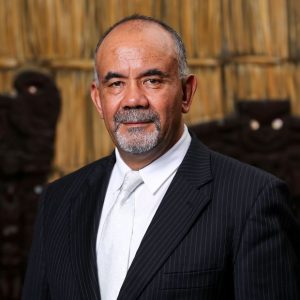 Dale Husband gets to know a little more about the life of New Zealand’s first Minister of Māori Development.

Let’s turn away from politics and kōrero about your mum and dad and other background.

Well, I was born in Tokoroa. My dad, who was adopted, had five wives — and my mother, Miria (or Milly) was his fifth. And all my half-brothers and half-sisters were a whole lot older than me.

My dad was James William Flavell and, in his work, he followed the power projects all up the Waikato River. Arapuni. Karapiro. Mangakino. But he had a big reputation as a character and a sly grogger, too. At one time, he was the bar manager, in the Tokoroa Hotel, of the biggest bar in the Southern Hemisphere and ran the Tokoroa Billiard Salon.

I cannot remember a lot about this, because he died when I was young. I was closer to my mother, and I was sort of an only child.

She herself was the youngest of eight or nine kids — and we lived, where I still live, at Waiteti in Ngongotaha. Her mum was Ranginui Parewahawaha Leonard, who lived until she was 112. She was still carrying firewood when she was 90. A very strong woman. But I’d go shopping for her to get her a packet of smokes or milk or whatever.

My mum spoke Māori with her, and she spoke Māori to me. But I didn’t pick up the reo in those days. It was only when I went to St Stephen’s that I learned it because it was taught, and also I was inspired by the Tūhoe boys and others from up north who spoke it all around us, including on the football field.

Then at university I carried on with the reo – and followed that up at teachers’ college and when I became a teacher.

When did you first get into leadership?

That was at primary school when I was appointed as the bell ringer. You knew you had power over the whole school when you rang the bell. Then I was head boy at Ngongotaha Primary. At Intermediate as well. Then at St Stephen’s.

But I don’t think I had anything special going for me. Just the values that my mum expected of me. Courtesy, especially towards women. Playing things straight. Considerate. Getting on with people. Not being confrontational. From time to time I suspect that I have strayed from those ideals, but I hope our children have learned from my experiences.

You were a pretty handy footballer, too.

Yeah. I started off playing hockey though, because we were too far out of Rotorua for Saturday footy. I’d still do some kicking at home — like trying out goal kicking over the clothes line, even when there were sheets on the line … which wasn’t well received.

But at St Stephen’s, of course, rugby was what you did. I made the 1st XV from the fifth form — and I was the captain two years later when we scored more than 1000 points that season, and went through undefeated, even though we didn’t play against other schools, just men’s teams.

I’d started out as a loose forward but then switched to hooker and made some good teams: NZ Universities, NZ Teachers, Auckland for a few games, and a trial for Northern Māori but couldn’t make the team because of an injury.

As a young fulla, were you well read?

No. We never read at all at home. But at St Stephen’s there was a culture of doing prep. Come prep time, head down. Even as juniors. So we got into the routine of homework and study.

I had good teachers, too. Like Merimeri Penfold at university and Maxine Tamahori at teachers college. I see the huge value in reading as I have gone through life.

In those days, there was quite significant protest action. Did you get caught up in that?

No. To my shame. St Stephen’s was short on giving us a view about the wider world. And I didn’t have much idea about what was happening to the blacks in South Africa, or the United States … or how any of that had anything to do with me.

So, when there was the Land March, and Bastion Point, I was thinking: “What are they doing?” I didn’t get it.

It took a while for it to dawn on me what the activists were on about. But then I began to take notice of what Ken Mair and Hone Harawira were doing and saying — as well as Annette Sykes, Eva Rickard, Syd Jackson, Moana Jackson, too. And Mike Smith. Their views have been an important influence in my life.

Back to your family for a moment. Your dad, with five wives, must’ve been a smooth dude. I imagine you’re married, even if you don’t have five wives. And perhaps you’ve dated Pākehā chicks in your time?

Coming from St Stephen’s, we didn’t know how to date chicks, Pākehā or otherwise. But I was extremely fortunate to link up with Erana Hond, who’s from a Taranaki family.

She went to St Joseph’s, but in our early days as teachers we were both at Mangere College. I was in awe of her — and kept my distance — which she took for arrogance.

Then, on her last day of a teaching section there, she accosted me at the Mangere Bridge pub. And I got brave enough to ask if I could take her for a ride on my motorbike.

She said: “Yeah. Where are we going?”

We ended up in Hamilton at her mum and dad’s. And we’ve been together ever since.

I’m very lucky. She has the same dreams and aspirations that I have. She has set up kōhanga and kura. She’s taught at university. And she’s changed the lives of people up and down the country.

Five of them. The eldest is Ranginui, who’s a doctor, then Moeahau (now in London), Miria, Whatanui and the baby, Matangiroa, who has one more year to go at school.