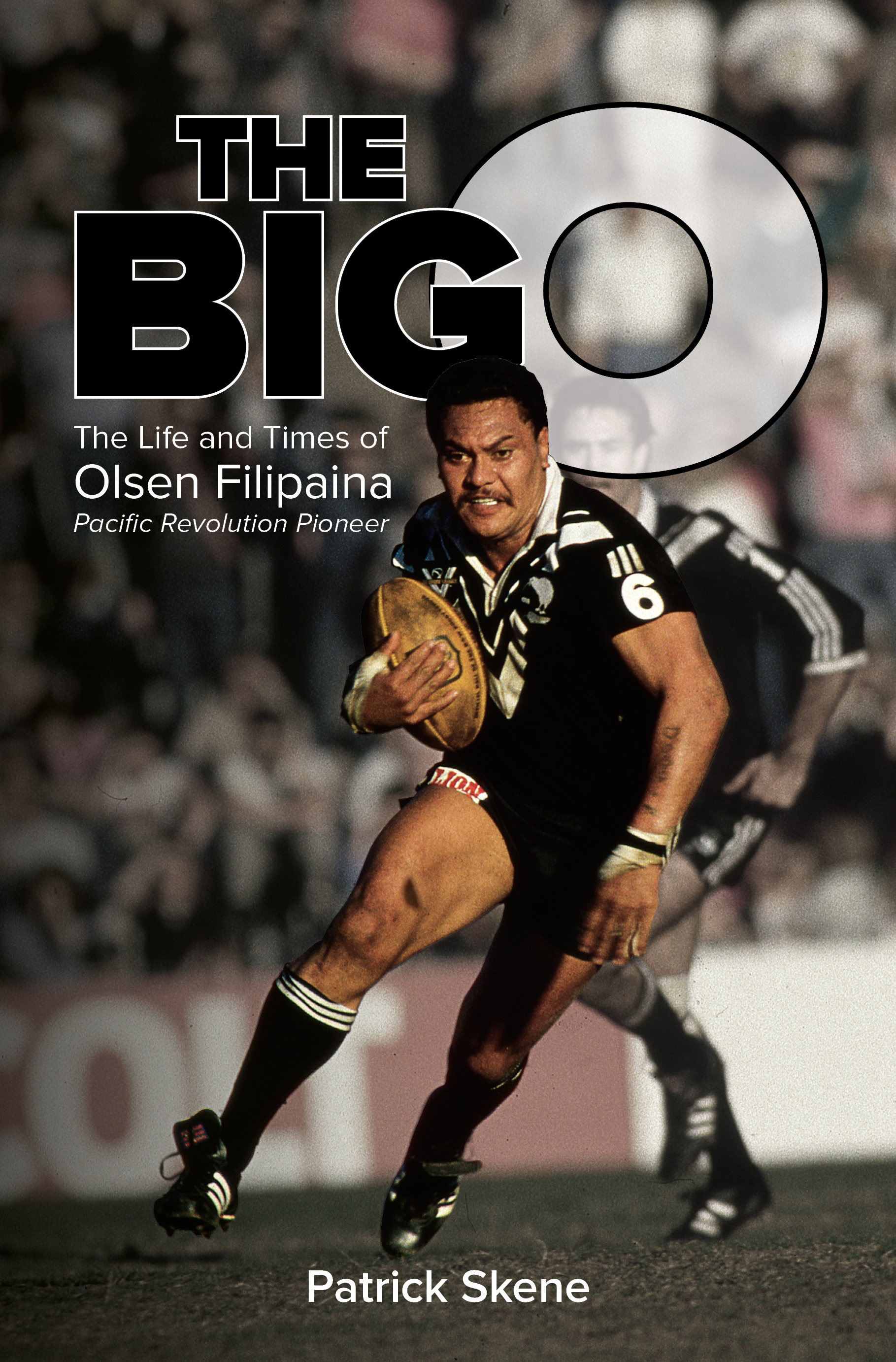 Back in the 1980s, there were a number of joyous moments for New Zealand sports fans when Olsen Filipaina, a Sāmoan-Ngāpuhi rugby league player, almost routinely in a test match, would deal to Wally Lewis, Australia’s superstar.

Wally had earned his special status as a Brisbane Bronco, a Queensland rep, and kingpin of the Aussie test team. But the Māngere man, when he wore his Kiwi jersey and confronted this “legend”, had the knack of spoiling Wally’s afternoon — and, from time to time, knocking him arse over head. That was a thoroughly satisfying spectacle for Kiwi onlookers.

So, although those feats and others were some time ago, it’s been no surprise that, finally, there’s a 330-page book telling us about his career.

It’s called The Big O (by Patrick Skene) and it traces Olsen’s achievements once the family came south from Awarua in Northland to settle, eventually, in Tennessee Ave in Māngere. His mum, Sissie, was the daughter of a Ngāpuhi shearer, and his dad, Aloese, a boxer and then a fitter and turner, had come from Sāmoa as a 10-year-old on a scholarship. He was a hard, intimidating man.

Olsen had a warm, friendly demeanour — except on the field playing bullrush as a kid, or rugby or league for Ōtāhuhu College, and then league for the Māngere East Hawks, Auckland, and New Zealand, where he did more than his share of intimidation as well.

Physically, he could do that comfortably because of his 100kg frame, his speed and skill, and his taste for collisions. It was the same when, in 1980, among others like Kurt and Dane Sorensen, he signed up with a Sydney club. He became a Balmain Tiger for five years — and he carried on with other club contracts after that.

He’s now 63. And he’s looking back on an impressive career as a player, but also on more than 40 years as a garbo in Sydney. Not that picking up garbage has been his only association with filfth. As well as adulation from his fans and worshippers, he often copped racist stuff, too.

So it hasn’t all been fun. But it’s good that his story has now been told. Here’s Patrick Skene in an extract from The Big O to give you just a small taste of that story. 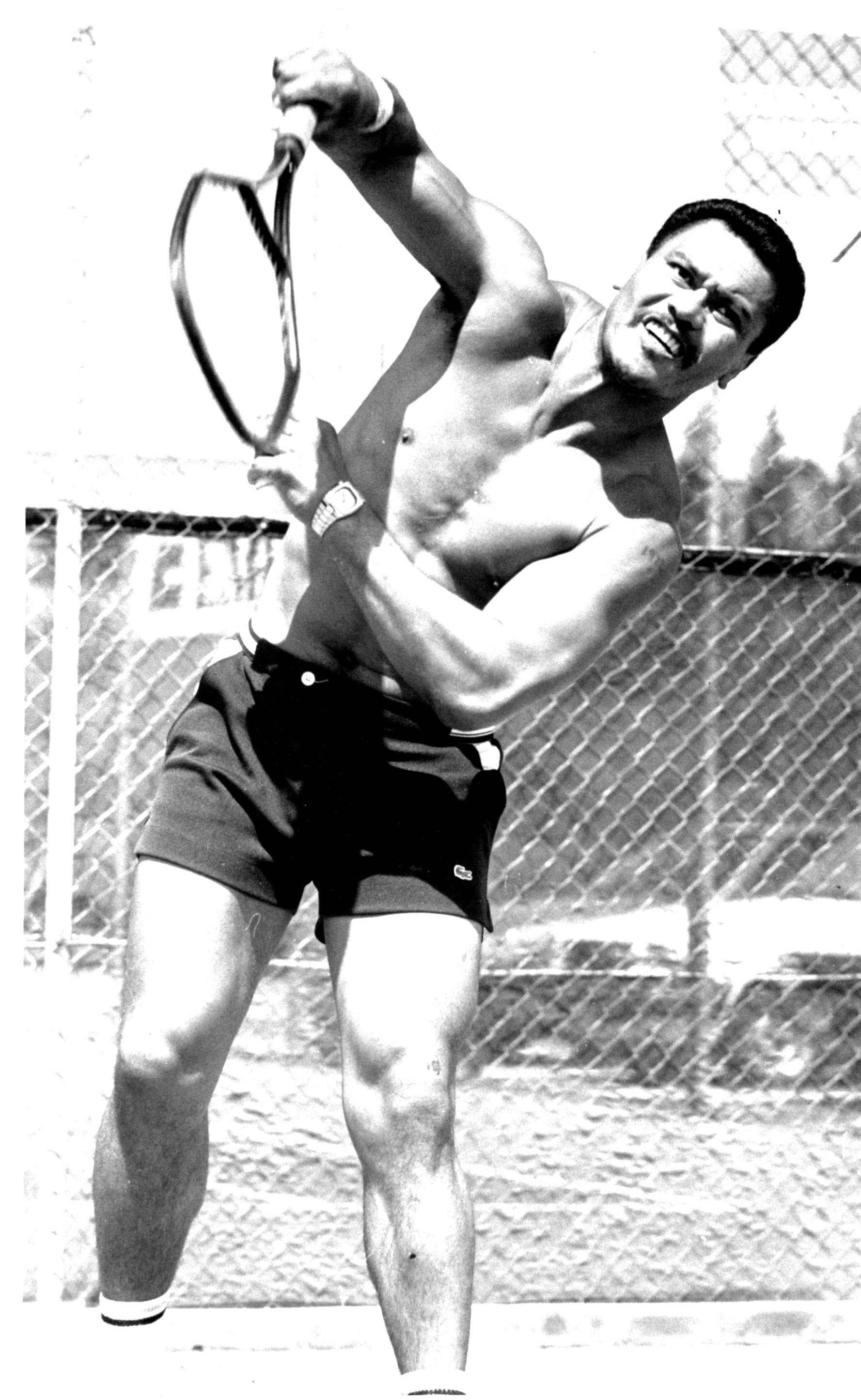 As a child, I watched Olsen play at Leichhardt Oval in the early 1980s. He appeared like an intergalactic figure — arrived via a portal from another realm.

With an unusual name, dark brown skin, big thighs, flashing Polynesian eyes and a beaming smile, he played an exciting style of rugby league — the silky skills of a back mixed with the power of a forward. In one of his footy cards he wore a necklace of white puka shells in a proud nod to his Pacific heritage. This we hadn’t seen.

To see Olsen play the game of rugby league at Leichhardt Oval was to witness a one-man wrecking ball. It was unprecedented for a man of his size to be fast enough and have the skills to play in the backline. He was a living manifestation of force = mass x acceleration and had a unique method of leveraging his size and power to puncture watertight defences.

His suite of physical assets triggered comparisons to a young Aboriginal Arthur Beetson, who showed extraordinary skills for a big man and also first plied his trade in Sydney for the Balmain Tigers at Leichhardt Oval in the late 1960s.

Olsen’s opponents in the centres and later at five-eighth would have to contend with a combination of speed and skills that was underpinned by a famous set of big thighs. His powerful-impact game would become his calling card and his thighs his most memorable feature, particularly to those he trampled over.

What made him different to the largely Anglo-Celtic players that came before him was the horsepower he was able to channel from his physical density that seasonally ranged from 95 to 105 kilograms, all piled on a short 5-foot 10-inch/177-centimetre frame.

A nightmare to both tackle and be tackled by, he personified brute force, running over or bouncing off his opponents and creating opportunities for his teammates. His game was built on exceptional strength and power, a low centre of gravity, a love of contact and playing the game with joie de vivre. 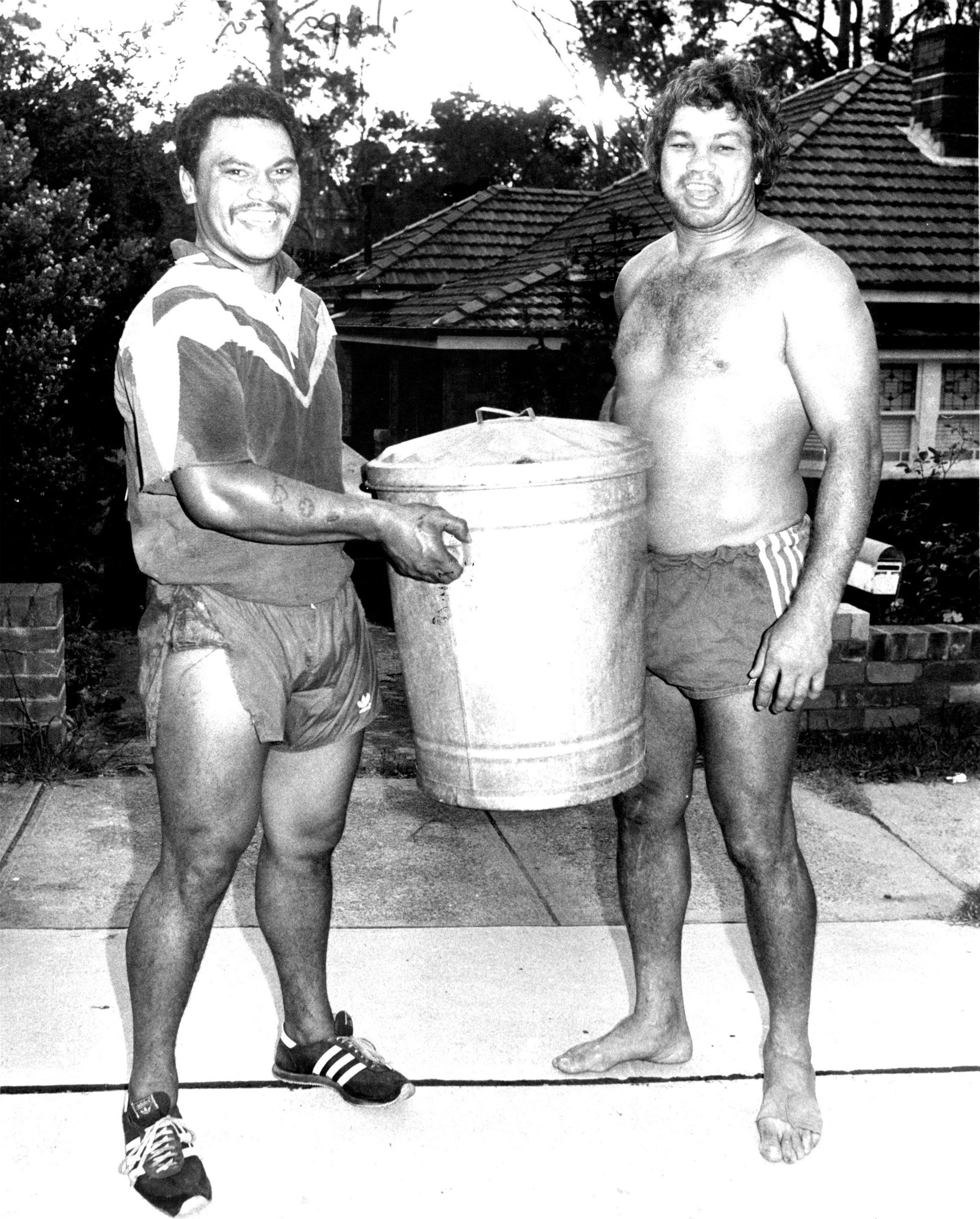 Olsen was a garbo in Sydney for more than 40 years. Here he is with Aboriginal league legend Arthur Beetson, in January 1980, at the start of his Balmain days. (Photo by Russell McPhedran/Fairfax Media via Getty Images).

When Olsen made his debut for the Balmain Tigers back in 1980, he was one of just four Polynesian and Māori players of the 331 players in the Sydney competition.

In 2017, in the expanded National Rugby League, the Pacific community makes up 48 per cent of the 440 registered players, a total of 212 Māori, Polynesian and Melanesian ancestry players.

Although there were Pasifika outliers playing in Sydney before Olsen such as Māori Henry Tatana, the Fijian Toga brothers and Sāmoan Oscar Danielson, for many observers, Olsen Filipaina was the modern-day pioneer of the Pacific Revolution.

His NSWRL career stats — 107 first-grade matches and 323 points in eight seasons — only tell a fraction of the story. Olsen played in a time before NRL clubs had sophisticated player welfare programmes including cultural competence training, in-house chaplains, player welfare managers and mentoring programmes.

He played under coaches who had no experience in dealing with the unique and fiercely family-centric Pacific players. It’s a different story now.

By 2021, the NRL projects that at current growth rates the Pacific and Māori communities will provide the majority of the NRL’s elite male player base, a figure predicted to rise to 60 per cent by 2027 according to the NRL’s Nigel Vagana.

If a modern-day NRL coach does not know how to bring the best out of Māori and Pacific players, they will soon be out of a job. Cultural competence has become a requirement for any NRL coaching position.

NZRL President and former Kiwis hooker Howie Tamati says it’s a non-negotiable when trying to get the best of Pacific players: “It’s really simple. You can’t swear, you can’t shout. You can’t blast them if they won’t look you in the eye. You can’t disrespect elders. You have to spend time with parents and siblings and build trust. If you don’t respect the sensitivities, then you won’t get the best out of them.” 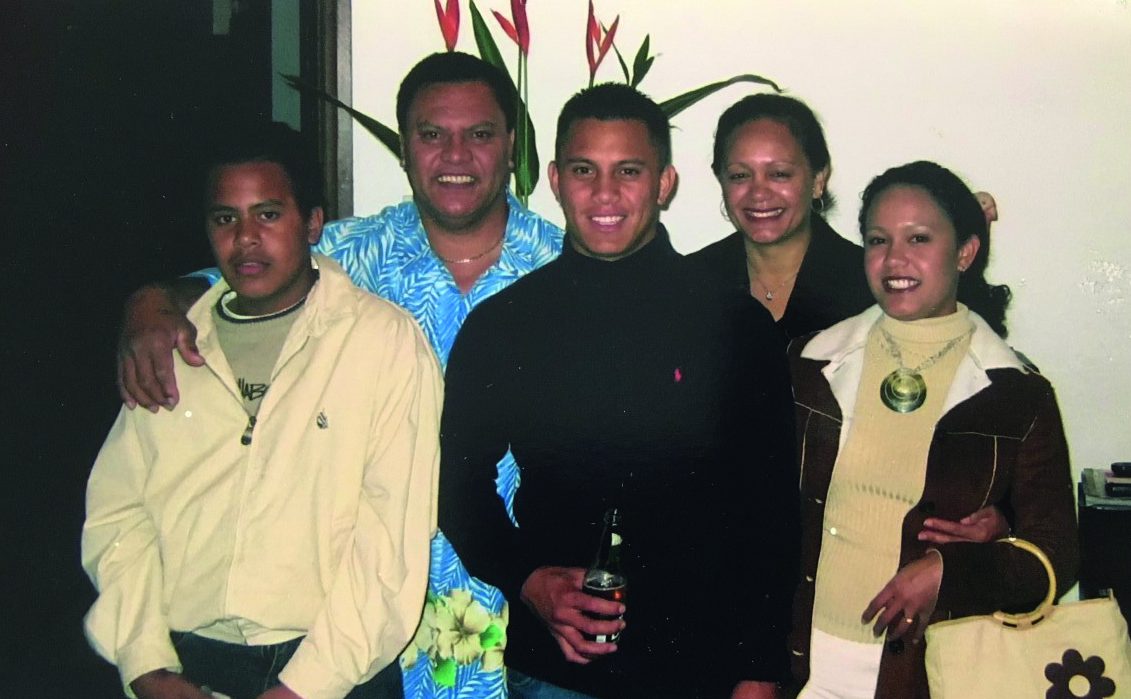 From a small base of outliers in the 1970s and 1980s, the Māori and Pacific community is now dominating the major rugby league competitions in the southern hemisphere — the NRL in Australia and the Fox Memorial Cup in New Zealand.

Today every NRL team dressing room has Pacific players and it’s difficult to understate the value and excitement they have added in reshaping the game. The power and speed of Semi Radradra, the size and skill of Jason Taumalolo, Benji Marshall’s revolutionary passing and ” ‘Benji step”’, the brute force of Fuifui Moimoi and Sonny Bill Williams.

Powerful and adventurous, they have brought new music, food and passion to the game with other players coming along for the journey.

The Pacific communities have culturally upended the game and provided many new and complex challenges for NRL clubs who have been forced to reconcile century-old Anglo-Celtic traditions and behaviours with a new and diverse group.

This merry band of cultural disruptors have adapted to the NRL’s playing structures but have not conformed to a level that would deny them their individuality, physicality, creativity and fun. They have brought with them a distinctive, instinctive playing style that has become a passionate expression of their heritage.

The Pacific Revolution at grassroots and NRL level has its beginnings in New Zealand, and for its Māori and Pasifika peoples, playing in the NRL has become a financial tide that is lifting all boats.

This is an extract from The Big O: The Life and Times of Olsen Filipaina, written by Patrick Skene and published by Upstart Press.