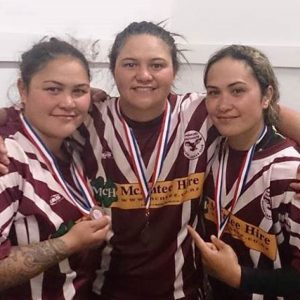 Rona, Kahurangi, and Hilda Peters after their club grand final win with the Papakura Sea Eagles this year.

When the Kiwis Ferns played and, sadly, lost their rugby league World Cup final last year, Hilda Peters was feeling the pain more than most.

She was in the crowd at Headingley, in Leeds, as two of her kid sisters struggled to contain a fired-up Aussie team. The Kiwis were gunning for a fourth straight world title. But that didn’t come. Tears did instead.

Hilda had already entertained thoughts of playing for her country. She rather liked that idea. The tipping point, though, was seeing the hurt in her sisters – and in her partner, Laura Mariu, who was also in the team.

“It sucked,” says Hilda of the loss. “But it motivated me to get back and go: ‘Okay. Whatever the team is gonna have next, I wanna be in there.’”

Next up, the Kiwi Ferns play the Aussies on November 9 in Wollongong. And making her international debut there – alongside her sisters Rona (26) and Kahurangi (20) – will be Hilda Peters: a 31-year-old mum of two.

These Te Aupouri wahine were always a good chance to play rugby league. Their parents, Alwyn and Georgina, are stalwarts of the Papakura Sea Eagles club.

Alwyn isn’t real fond of rugby union – even though his daughters play that too – but he has coached and managed their league teams over the years, in between stints working as a sparky on oil rigs. Then the Sea Eagles also benefit from Georgina playing a motherly role which extends well beyond her own kids.

Hilda, Rona and Kahurangi were side-by-side in the Sea Eagles’ overtime win in the Auckland club final this year against the Manurewa Marlins. And, once again, their range of skills was a huge asset.

“Hilda’s not the biggest loose forward,” says the Kiwi Ferns coach, Rusty Matua. “But her work rate and talk is inspirational. She’s a late bloomer, but she’s really applied herself after seeing her sisters lose at the World Cup.”

Rona, the Ferns halfback, made an immediate impact when she first made the national team eight years ago. In fact, she was the player of the year. And Rusty says the Aussies keep an especially anxious eye on her because she does a lot of damage with her hits. “She’s an unbelievably good tackler,” he says. “And her kicking game is superb.

“Then Kahu, the ‘Scud Missile’, plays 13. We’ve had to tweak her tackling action, as she’s broken her collar bone and done her shoulder. We’re trying to get her to wrestle more, rather than just smash people. That’s still a work in progress. She’ll top the tackle count, no doubt, in the upcoming test.”

Chatting with the girls together at Te Mahurehure marae during a training camp prompts their own observations.

Hilda, who also plays a bit of hooker, is the quickest of the gang. That’s according to her, anyway. (And she’s spot-on if the question was who’d be quickest to answer).

Rona, they agree, is the composed one who knows how to build pressure on the field. She’s not the angry one anymore, as she aggressively reminds her sisters.

Kahu is the fittest. No disputes there. She had the results from the team’s Yo-Yo test that day to back her up. But who do her sisters think she plays like? “Say Sam Burgess,” whispers Kahu. “SAY Sam Burgess.”

Part of the reason for Kahu’s fitness levels is her job. She’s a postie – as is Hilda. Their mum works at NZ Post too. Sometimes Kahu is on her bike for six, seven, or even eight hours a day if work-mates are away. That’s not intense stuff, but it’s on-going. And occasionally the pace does have to increase if she’s under pressure to make it to a game.

Of course, there are other elements to their lives. And one is te reo Maori. They’re fluent – as is another sister, Waana. So too is a brother, Reihana, who’s playing league in Sydney. They all went through kohanga reo and then on to Te Kura Maori o Nga Tapuwae, a staunchly Maori part of the Southern Cross campus.

Naturally, they’ll be in the front row when the Kiwis Ferns lay down their challenge to the Aussies in the test at the weekend. And this time there’ll be the three of them on hand to help deliver the win that eluded them in Leeds.

For Hilda especially, it’ll feel good not to be sidelined and not to be feeling so helpless.