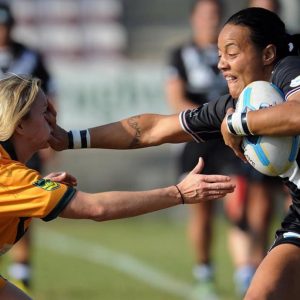 Now’s not a good time for introductions. Honey Hireme displays her famed right fend against Australia during the rugby league World Cup.

If Honey Hireme was male, Sonny Bill Williams could well be operating in her shadow. She is that good. Good enough for starters to be known as ‘Honey Bill’.

Just take a look at what she has done lately.

Last year, Honey played for the New Zealand rugby sevens team in their World Cup in Moscow. She started every game, scored four tries (including crucial ones in the semi and final), and helped our girls to the title.

From Moscow, she flew straight over to Leeds for the rugby league World Cup. There she captained the Kiwi Ferns to the final, scored tries against each of her opponents, and was named player of the tournament.

Then, this year, she made her debut for the Black Ferns – our national 15-a-side women’s rugby team. And, while they didn’t shine at their World Cup in France, Honey did. She scored five tries and was named in the World XV.

Even though Sonny Bill has her measure in boxing (where she’s fielded a heap of offers but hasn’t yet stepped into the ring), her achievements on various footy fields do amount to something formidable – something Kiwi sports fans should be savouring.

Honey isn’t fazed, though, by the lack of recognition, and isn’t grumbling about it. She sees it simply as a fact of life that her male counterparts get most of the attention, as well as nearly all the riches.

But she also sees a glimmer of light on the horizon. “Hopefully”, she says, “more professional sport for females will mean more males seeing us as athletes and not just as girls.”

Honey joined the professional ranks this year as one of New Zealand’s first-ever contracted female sevens players. She’s not earning Sonny Bill-type dollars, but with the sevens squad getting $15,000 – $30,000 a season, along with $1,000 per tournament, it’s a step in a rewarding direction.

Honey’s sporting apprenticeship began as a five-year-old on the league fields of South Waikato. But she needed a spot of luck to set things in motion.

She’d head along and watch her brothers playing league for the Putaruru Dragons. Watching was okay as far as her dad, Chippy Hunter, was concerned. He didn’t want his baby girl out on the field and getting knocked around.

One Sunday, though, they were short of Dragons. And dad wasn’t there. So they threw her on.

Honey recalls that her dad wasn’t impressed when he found out. “But he came along and watched me play and saw that I could hold my own. He was pretty sweet after that.”

She held her own so well with the boys that she was soon making their rep teams. She played league against the boys all the way through to high school and then juggled schoolgirl rugby for Putaruru High with senior women’s league.

That one of the Hireme girls would go on to star in sport wouldn’t be a big surprise to those in Putaruru. For starters, sheer numbers were in their favour.

Honey’s mum, Caryn Hunter, is one of 11 kids who all raised their families in the area. So Honey, who took her mum’s maiden name, had 40 or so cousins to charge around with. They were sporty too, and included Corey Chase – a sensation as a schoolboy sprinter who ran 21.58secs for 200m – and Haden Hireme, who played NPC rugby for Waikato.

There was also a terrific work ethic among Honey’s Ngati Raukawa whanau. Chippy runs a scaffolding business which the family is involved with – and that’s not a scene for people fond of short cuts.

So, the foundations were in place for young Honey to be something special.

She admits that she didn’t fully cash-in on her potential at the start of her international career, but that’s all changed as she’s got older.

When she doesn’t have a game, she now trains twice a day, with one rest day a week. Those sessions are a mix of team training, skill work, weights (where her best bench press is 75kg) and conditioning. Speed is a big focus too.

Rusty Matua, her coach in the Kiwi Ferns, sees the fruits of those efforts.

“Straight out speed and strength are her biggest assets,” he says. “She has a great step off her right foot as well – and a great right fend.”

Then having Honey – who plays centre or wing – knowing that she’s in top shape brings other benefits.

“You can see it in her eyes when she lines up against her opposition players,” says Rusty. “She has that real belief – it’s not a thought, it’s an actual belief – that she’s better than this other person.

The juggling between the codes which Honey managed at Putaruru High is still going on. She plays club rugby on Saturdays for Waikato University and league on Sundays for the Papakura Sea Eagles. Both teams won their competitions this year. Then there are regional rep teams and her three national squads to keep in mind. There’s a family too – she and her Samoan partner Tulu have three kids between them – and a real job.

Honey teaches people, mainly with intellectual disabilities, at Life Unlimited in Hamilton, which is her hometown now. A lot of that is practical advice, like helping them get familiar in new job surroundings or sorting their own transport.

“There are heaps of things that we take for granted around independence,” she says. “So, when I support people in making those changes in their lives, that’s huge for me.”

One day, Honey would like to take what she’s learned into coaching, ideally back in Putaruru. She’s been gathering and storing away ideas from all her coaches, even Liam Messam, who helps with her Waikato Uni rugby team.

“He’s been awesome, though sometimes I think he just coaches us to watch girls smash each other,” she laughs. “That’s all he seems to make us do at training.”

In the meantime, though, there are games with the Kiwi Ferns – like this Sunday against the Aussies in Wollongong – and there will be a series of Nines games in Auckland, as part of the NRL Nines, at the end of summer. Then there’s the enticing prospect of the Rio Olympics in 2016 with the sevens rugby team.

“I had a really good talk with Eric Rush last year before the sevens World Cup,” she says. “He played until 39, so that’s the target he mentioned to me. If I do that, I’ve got six more years. We’ll see.”

NOTE: The rematch of the women's rugby league World Cup final between Australia and New Zealand will be streamed live at NRL.com this Sunday (Nov 9) at 3.30pm (NZ-time).