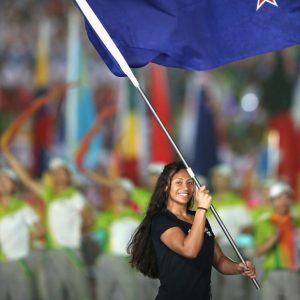 Back when she started primary school, Gabrielle Fa’amausili did her best to avoid swimming. If nudged along, she’d go in up to her knees. But that was it. The water wasn’t her friend. Not any more.

Things were very different when she was a toddler. She was right at home in the pool, loved splashing about, and already her swimming instructor was calling her the ‘backstroke queen.’

But one day, while showing off those backstroke skills, things went wrong for the three-year-old. She misjudged just where the end of the pool was. So, instead of swinging her arm back and grabbing the rail, she grabbed nothing. And she went under.

Her mum Rhoda, watching on, was there to pull her up. But the episode rocked Gabrielle’s confidence. And she didn’t make it back into the water for another three years. She was too scared.

That return to the pool wasn’t plain sailing either.

“Gaby was afraid and crying,” Rhoda recalls. “But the instructor just took her and said: ‘Don’t worry, you’ll be fine.’”

Gabrielle’s memory? “The instructor just told me to shut up and do it,” she laughs. “So I did.”

Now, eight years later, Gabrielle is the fastest female backstroker of her age in the world. She has a world title, won in Dubai last year over 50m, along with a bronze, swimming against older girls, from this year’s Youth Olympics in China too.

So why has Gabrielle taken such a shine to backstroke?

“I think it’s just because that’s my best stroke,” she says. “I don’t know why I’m better at it, but maybe because breaststroke and butterfly are too complicated for me.”

“Her underwater work is really good,” he says. “She’s got a great hold on the water. Then she has good fast-twitch fibres and a lot of power.”

If power is a key to Gabrielle’s success, then her mix of Pacific genes deserve some credit. While she has been raised in New Zealand, and goes to Avondale College, both her parents are Samoan. Then her grandparents on her dad’s side are from the Solomon Islands and Kiribati.

You’d think it unlikely that such a genetic combination had been tested in elite swimming. But Gabrielle’s second cousin, Orinoco Fa’amausili-Banse, was a top freestyle sprinter who represented New Zealand at the Beijing Olympics.

Height is another element in Gabrielle’s favour – or at least it could be. She’s not a towering figure yet at 1.75m (or 5ft 9in) but, seeing she’s just turned 15, there may be plenty more to come. That’s what her mum suspects. There’s height on both sides of the family, and Gabrielle’s teenage brother, Ezekiel, is already 6ft 5in.

Even when you have the physique, training takes up a lot of time. In her case, 10 sessions a week.

“I’m not a morning person,” she says, “and training starts at 5.15am. Mum always takes me. She helps me get up too, because I can’t get up by myself.”

Afternoon trainings are 5-7pm, then it’s dinner and homework. A normal day finishes after 10pm.

But the results are coming – and so too are the learning experiences.

Take the Youth Olympics in Nanjing, China, in August, for example. Gabrielle proudly carried our national flag there – as you can see in the photo above – but she didn’t produce her best times.

“The whole Olympic atmosphere was almost too overwhelming,” she says. “It was awesome, but crazy.

“I didn’t perform as I would’ve liked to, but I’m happy that I came away with a medal.

“I need to not get distracted by everything around me and just remember: ‘I’m here to swim. I can swim. I’m good at swimming.’”

Though backstroke is her speciality, Gabrielle can also move in butterfly. (Yeah, one of those strokes she claims is too complicated). Freestyle as well.

And remember this is a 15-year-old. Still a kid.  With a nice sense of fun.  But no more crying like she did a few years ago when her coach suddenly stripped down to his speedos to challenge her to a race.

“I managed to get over that,” she says, “and we race sometimes. But, not being cocky … he’s pretty slow. He’s kinda lost it.”

She’s dismissive too, of those who suggest that backstroke is for chickens who’re afraid of having their face in the water.

“No! It’s for skilled people who can swim backwards without looking where they’re going.”

It’ll be interesting, exciting as well, to see the international progress she makes doing exactly that.