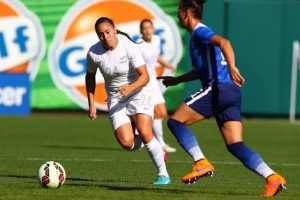 When Jasmine Pereira started high school, her mum told her it was time to choose one sport and rip into it. Her primary school routine of competing in every sport, and skipping classes, wasn’t going to cut it anymore.

So when Avondale College asked the students to select their main sport, Jasmine already had her mind made up. It was time to focus on netball.

It turned out, though, that most of the girls in the school wanted to play netball. And, on the day when Jasmine needed to sign up, they were quicker than her at joining the queue. So the 13-year-old ditched the netball idea right then and there — and switched to football. Its main appeal? It didn’t have a queue.

Five years later, and still short of her 19th birthday, Jasmine has already been an age-group soccer star for New Zealand. She’s played for our national senior side (the Football Ferns). And she’s a real chance to go to the World Cup in a few months and — if New Zealand qualifies — to the Olympics next year.

It’s been a speedy rise — though not one without its speed wobbles.

Jasmine grew up in West Auckland as the youngest of four children. She was the only girl and her big brothers — Jordan (now 21), Daniel (28) and Jared (36) — loved having someone much smaller around the house. That meant they could showcase their awesome power.

“My main sport as a kid was WWE wrestling,” says Jasmine. “I was totally the boys’ guinea pig. They’d be like: ‘Jazz, can I try this move on you?’

“It always seemed to end in tears. Never theirs though.”

Jasmine’s dad, Joseph, knew all about putting his body on the line for sporting glory. Back in his rugby league days, Joseph was the guy called on when his team needed a big hit on the opposition. His lack of self-preservation, and kamikaze tackling, earned him the nickname ‘Tokyo Joe’.

Both Tokyo Joe and Jasmine’s mum, Danira, have Samoan and Palagi Kiwi roots. Joe was raised in Lotopa, near Apia, until he shifted to Mt Albert for school, while Danira reversed a common trend by being born in New Zealand but schooled at Samoa College.

The four Pereira kids were born in Auckland, and while having three big brothers had its downside for Jasmine when it came to wrestling, being the youngest isn’t a bad spot if you want to be a top athlete.

Jasmine had ready-made opponents who were that bit bigger and stronger than her. The family also saw a lot of Joe’s sister, and the five older youngsters in her household, including her sons, Rene Naufahu (who was a top age-group rugby player, before turning to acting), and Joe (who was a national junior 400m champ and played NPC rugby for Canterbury). Jasmine’s sporting education was substantial — and at times intense.

Her first job in soccer was as a goal-keeper. The thinking was that with her background in netball — where she was a shooter — she’d have safe hands. But then her coaches saw her run and decided her pace could be put to better use in wider spaces as a forward.

Three years after getting moved out of goal, Jasmine was in Azerbeijan with New Zealand’s u17 team for their World Cup. Her explanation for her rapid rise from club, to regional and then national teams was simply that she just kept getting picked. But progress meant big doses of training. And she admits she didn’t quite have her act together off the field to manage all her commitments.

“I didn’t have any organisation and was getting overwhelmed,” she says. “You need time to do your studies, and your training, and to relax. My balance between school and football wasn’t as good as it could have been then. And Dad passing away was another factor.”

Tokyo Joe had been battling bowel cancer and no decisions around his care were taken without his baby girl’s input. The pair were really tight.

Jasmine now has a range of professionals — from nutritionists to fitness trainers to life advisers — lending her a hand. Her diary is a constant buddy too. With that support in place, she says life’s running more smoothly and she can focus on the next steps, which include trying to make it to the FIFA Women’s World Cup in Canada in June with the Football Ferns.

Tony Readings is an Englishman who coaches the Football Ferns. He first noticed Jasmine in 2012, when she was with the national u17 team. It was her pace that caught his eye. And then, when he worked with her more closely, he says her competitive edge stood out.

“You have that or you don’t,” he says. “She has it. She doesn’t go into things with much fear. When she has the ball, she takes on her opponents and she’s hungry to score. Then, when she’s defending, she puts aggressive pressure on the ball.”

Over the last 12 or so months, Jasmine has moved from someone not in the frame for the national side, then to the cusp of the wider group (she made her debut in October last year) and now to pushing for a spot on the field. She’s putting her hand up strongly to be one of the 23 players going to the World Cup.

In the meantime, her outside life is moving along too. She left school at the end of last year and now works part-time in her cousin Joe’s gym (Ludus Magnus) in Auckland. She’s studying for a Bachelor of Arts, majoring in psychology, through Massey Uni, too.

Joe plays a big role in her life, especially if she’s ever short of motivation. “If I’m even thinking about skipping a training session, he starts bagging me,” she says.

Then Ruben Wiki, the former rugby league hard-man who takes some classes at Joe’s gym, is another key person for Jasmine to turn to.

When Tokyo Joe was doing it tough, Ruben and Steve Price visited him in hospital. Since then, Jasmine says, Ruben has watched out for her.

“He’s like one of my big cousins now too,” she says. “He takes me for training sessions and is always asking how I’m doing.”

With so many of the family using the gym, young Jasmine naturally gets caught up in the banter and bravado, just like in the WWE days. Ruben has been especially useful in observing and playing a part in that — and in reading when she should work hard and when she should lighten up or have a break.

“Because of what he’s been through as an athlete,” says Jasmine, “Ruben understands when I need to back off. So he sticks up for me, whereas the other boys just give me stick and tell me to harden up.”

Note: This week Jasmine was named in a 20-person Football Ferns squad to play the USA in St Loius on April 5.