Your life would’ve been so different 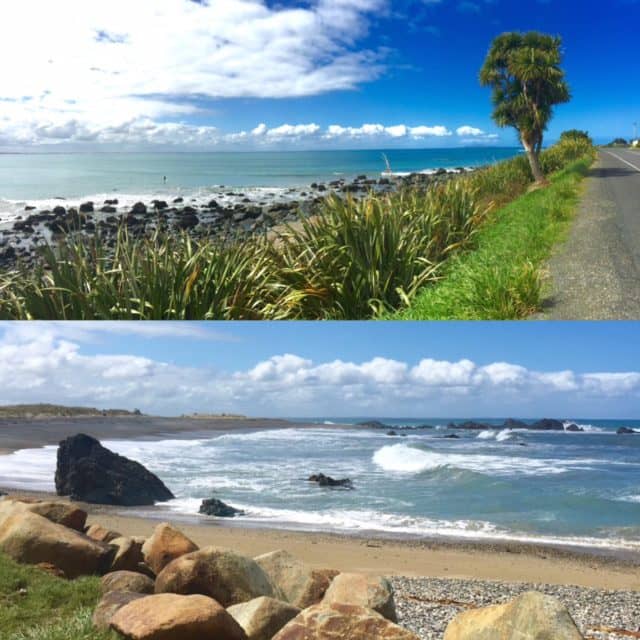 The road to Riverton, about 30 kilometres west of Invercargill.

Mick Jagger (or possibly Keith Richards) described Invercargill in 1965 as “the arsehole of the world.” Legend has it that a quick-witted local remarked: “He’d know. He’s passing through it.”

Just after the unveiling of our father’s headstone recently, my sister Trina and I took our mum on a roadie back to Invercargill, the city of our birth. We flew into Christchurch, then drove inland, tracking snow-capped mountains so impressive it was hard to keep our eyes on the road. Just as well there were more Speights signs than moving vehicles. Not one marae, though.

I pushed play on Green, Green Grass of Home, a favourite of Dad’s. For the first time ever, I realised Tom Jones was singing about his impending execution. So I put on Dean Martin’s That’s Amore instead. Mum and Dad’s song.

A roadie with a parent is a sobering experience, a reminder they actually had a life before you became the centre of their universe.

Once they were kids who rode on horseback across the ranges, or battled with grumpy teachers at school. They were teenagers who snuck out to parties. They were young adults who found jobs and sweethearts. One day they met their soulmate, settled down and had children.

As our mother reunited with cousins and friends, all now in their 80s and 90s, they asked each other over and over again: “Where did the years disappear to?”

Trina and I looked at each other. Where indeed?

Back in the ‘50s, many Māori men including our father, Nepia, and two brothers, moved from Rotorua to work at the Ocean Beach (and Alliance) Freezing Works in Bluff. He was the handsome Māori on guitar at the party. She was the pretty, Pākehā, ex-marching girl from a sheep station near Lumsden. That’s Amore.

Sometimes they’d walk into a party and the conversation would stop because his dark-skinned looks were a rarity. He’d sing and win them over. Charm didn’t always work. Mum says once, after a landlord met her husband, the flat she was promised was suddenly unavailable.

Marriage was a steep learning curve for a girl who had never cooked a meal in her life or had anything to do with babies. Next minute, she had six.

In those days, the birthing hospital was known as “the home.” Mothers stayed for 14 days after the baby was born. You weren’t allowed out of bed. “It was ridiculous,” scoffed Mum.

These days, you’re lucky to get an overnighter. Now there’s a McDonalds where “the home” once was.

We cruised past our first house. Back then, we rarely played inside. There was way too much going on outside. In Highfield Terrace, neighbours fed one another’s kids and looked out for each other. There were only three Māori families and one gave our mum a “starter bug” and taught her how to make Māori bread. Unfortunately, an over-enthusiastic visitor thought he’d do us a favour and toss out a jar of “muck” he’d discovered frothing away at the back of a cupboard.

Back then, big families living within a small budget couldn’t afford fussy kids. We ate what we were given. Mince. Sausages. Chops. And that meant leaving nothing on our plate, even if we felt like gagging on boiled cabbage.

Now, as my own kids turn their noses up at meals, I wish I’d followed my parents’ lead.

Once when I was billeted as a schoolgirl, I was offered a choice for breakfast. Muesli? Never heard of it. Black Doris Plums? What are those? If there were restaurants in Invercargill in the ‘60s, we never knew. Now my seven-year-old orders brioche with her fluffy at our favourite café.

Our parents both tended a huge vegetable garden. They came from a generation that could do anything — and that was without Google for advice. Dad was a hunter and gatherer. He’d knock down walls, build paths, construct fences, entertain, cook, and bake amazing bread. He also got his brood out and about, taking us to Christmas functions on the wharf, gathering toheroa at Oreti Beach and roller-skating in Riverton. We would holiday at our friends’ “crib” in Queenstown, dipping our toes into the freezing Wakatipu, while the adults drank beer from giant flagons called “peters”.

Mum knitted and sewed all our outfits. Who could afford to buy clothes? Dressed alike, we were New Zealand’s equivalent of the Osmonds (only Māori, female and Catholic). Mum baked, made preserves and managed the long “to do” list that mums had in the 1960s. With no disposable nappies, it was a big day when a ringer washing machine arrived. She’d count Dad’s hard-earned wages into a bunch of envelopes marked for household bills, then stash them under the mattress. No ATMs or bank accounts. For someone who’d had no idea, she really nailed motherhood.

As kids, all six of us, we were never in any doubt about who laid down the law in our family. That was Mum. Dad was the strong, silent type. He really had only one set piece. And that was more an order than advice.

“Don’t hang around boys. They’re only after one thing.”

We were well short of our teens. I was barely 10. Quite what that one thing was we had no idea at that time — and we didn’t dare ask. But we sensed that having five daughters was an ongoing nightmare for our father, even though we didn’t cause him any grief.

The old water tower still hovers over the famously wide streets of Invercargill. People still roll their rrrr’s. The crime rate in Invercargill is low and so is unemployment. The average cost of a house is $188,000, and tertiary fees are non-existent. It’s close to surf beaches and ski fields. The mayor, Tim Shadbolt, a groovy ex-Westie with kids toys in his office, proudly showed us around the beautifully restored Civic Theatre where I made my stage debut as a seven-year-old in The Merchant of Venice. This time, they were expecting a Gin Wigmore concert to sell out.

On the final day of our roadie, we drove to Bluff. A crowd of Māori poured out of the marae, heading towards the beach to practise karanga.

At the Oyster Cove Café, the teenage waitress laughed and said: “Look at the view.” She gestured across the ocean to Stewart Island in the distance. “Why would I ever want to leave here?”

In 1970, Dad got the call from the whānau up north. Reluctantly, he packed his wife and six kids into the family station wagon and we drove to Rotorua. We began a whole new life within a big whānau that stretched across Te Arawa and Ngāti Tūwharetoa.

It was a culture shock for us, but Invercargill soon faded. That’s kids for you. On the other hand, the love my parents had for the deep south and their old friends never did. Dad often said wistfully: “They’re beautiful people down there. Just beautiful.”

In 1965, the “beautiful people” apparently pelted the unknown Rolling Stones with jelly babies, half-eaten pies, ice creams — whatever they could grab. They were there to see Roy Orbison. Invercargill may have done the Stones a favour. That sort of reception can be character-building for a musician.

One of Dad’s old friends was Snow, a former freezing worker who didn’t return north. He looked at me and Trina.

“Your life would’ve been so different if you’d stayed here.”

But Mick Jagger had no idea what a great start in life we had as Southern People. After all, he was just passing through.