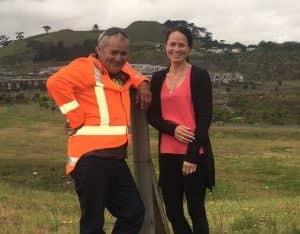 Nadine with her Dad

My dad dug the hole I live in.

He didn’t dig it on his own, and the new housing subdivision of Stonefields where I live (about five kilometres from Auckland’s CBD) is more of a crater than a hole. But, every morning when I walk these streets, I can’t help but think of my dad.

He wasn’t part of my life, growing up. My parents separated before I was two years old and my earliest memories are shaped by his absence. I remember sitting by the window some days, looking out into the world, wondering where he could be.

It turns out that much of the time he was right here, driving a digger at the base of Mt Wellington on Lunn Avenue. This was the old Winstone’s quarry from 1936 until it was closed down in 2001. The rock and stone that was excavated from here was used to build Auckland from the ground up. Motorways. Footpaths. Concrete pipes and foundations for our earliest skyscrapers. I like to imagine there are stones from the Lunn Ave quarry supporting the base of the Auckland Harbour Bridge. And under the Southern Motorway, the central artery of this sprawling city.

Stones for concrete, bucket by bucket. As each fresh load was carted away, Maungarei, the watchful mountain, has kept track.

Before Winstone Aggregates broke the ground, Ngāti Huarere, Te Waiohua, Ngāti Maru and Ngāti Maniapoto all made their home here at different times. On the eastern slopes there were extensive gardens, fertile terraces like shelves that are still visible on the landscape today.

Significant pā belonging to Ngāti Paoa (Mokoia and Mauinaina) were here too, fortifications built to fend off invasions by Ngāti Whatua and Ngāpuhi. I’m certainly no authority on the history, and I’m sure there’s plenty of different kōrero depending on who you ask. But when I look up towards Maungarei, the great shadow of her imposing figure assures me she remembers it all.

My dad did his bit. Digging, loading, crushing, driving. He’s Peter Hura, Ngāti Hine, one of 11 children from Waiomio, near Kawakawa. He came to Auckland in the 1960s, met his English rose in Papakura, and they married. He was 19 and she was 16. By the time the decade was up, they’d had three children and were in way over their heads.

I don’t know much of the detail, but I do know that when my mother left my dad, clothes and blankets jammed to the roof of the old Morris Minor, she was getting out of a bad situation. I don’t blame her for leaving. She was thinking only of her children and what would be best for us.

And so I grew up, a half-caste kid of divorced parents, with a Māori father who I never saw. I didn’t carry that knowledge as a stigma, so much as a secret I had to protect. My survival instincts were finely honed — they had to be in 1980s New Zealand.

Luckily, I’d been born with pale skin and light-coloured eyes. I drifted under the radar, laughing at the racist punchlines of “English-Irish-Māori-man” jokes so as not to give myself away.

My mother tried to make things easier by changing our name as soon as she could. She was unshackling me, she thought, from the kind of prejudice she’d suffered when using her married name. Renting houses, applying for loans, getting doctor’s appointments — all of it so much more difficult if you had a Māori surname. She was being practical, not cynical.

My brothers had a harder time. The colour of their skin left no room for doubt. I remember a girl once jeering at me in the playground. “That’s your brother isn’t it?” she said, pointing to the lone dark figure kicking a ball in the quad. The other kids laughed and snorted, and I was torn between wanting to claim my brother and wanting desperately to belong.

Why couldn’t I be Māori and still belong?

Well, because I grew up believing that to be Māori was to be dumb. Lazy, naughty, snot-nosed and barefoot. Māori kids were slow to read but quick to run. They slept in their clothes. Used coat hangers for car aerials. Pissed everything they earned up against the wall.

It’s always the stereotypes that hurt the most.

It wasn’t until I went to university that I began to question the subconscious messages I’d absorbed all my life. It began with an innocuously-worded essay question about something called “the political economy of labour migration”. This is just a convoluted, academic way of talking about the government policies that influence the flow and movement of people for economic reasons.

Little did I know that, in my quest to understand this concept, I was taking the first step back towards the father I’d lost. I learned, for example, that, when he first pitched up in Papakura in 1966, he was part of a wave of young men lured to the city by the promise of steady work and good fortune.

The post-war New Zealand economy was booming. With guaranteed market access to the UK for our agricultural products, the government needed to industrialise urgently, and who better to build the required factories and roads, buildings, houses, motorways, than the swathes of idle, rural Māori just a few hours away?

But, separated from their communal lands for the first time, Māori didn’t always fare well in the city. Blue-collar work doesn’t exactly offer many opportunities for promotion or advancement. Unskilled labour, they call it, although I’m fairly certain it takes skill to excavate rocks out of the hillside.

The isolation from whānau and communal life brought problems. Alcohol. Poverty. Social dislocation. The more I read and researched the topic, the more personal it became. I began to realise that the “numbers” referred to in my books were not numbers at all, but men and women with names. Men — absent fathers — with children.

When I finally completed that assignment and handed it in, I didn’t necessarily forgive my father for his absence. But, for the first time, I understood it. Sometimes there’s no one to blame for our hardships — we’re all just products of our time.

In the same breath, I began the long road to forgiving myself. It’s one thing to deny your own identity, but it’s another to deny that of the people you love. When the girl at school asked me if that boy in the quad was my brother, I actually don’t remember what I said. I only remember hesitating. And I carried that guilt for years.

But that’s the reality of the country where I grew up. That’s the unremembered, unacknowledged New Zealand of the 1980s. A country where a child like me grew up thinking that I was lucky to be white. A country that let me believe that colour mattered at all.

You can always fight overt racism, but it’s the racism we absorb subconsciously that’s the most damaging. It’s the messages our children internalise through popular culture, language, social media. Even as we congratulate ourselves on how progressive we are as a bicultural nation, the harmful stereotypes still persist today.

The irony of this hits me every morning when I walk around this new suburb built in a gigantic hole that took 60 years to excavate. At its deepest point, the jagged stone face is about 30 metres vertical. Walk around here for five minutes and you will see the scars on the landscape. Exposed earth, like the inside of a stomach. Raw. Rugged.

The diggers are still here, in fact. New rows of houses are going in all the time. As I take my 6am walk, I wave to the workers, brown faces all of them, and I want to yell: “Hey! My dad dug this hole!” Because I’m proud, I guess. Of who I am and where I come from. I no longer have any secrets. I finally know where my dad was all those years of my childhood when he wasn’t with me. He was down here, calloused hand to the lever, scraping, loading, driving.

A few years ago, I reconnected with him. He’d made the first move not long after I turned 17. But I was arrogant. I thought: “I’ve come this far without you. I don’t need you now.”

It wasn’t until I did the total immersion reo course that I began to really engage with forgiveness and moving on. And a big part of that, weirdly, was just being able to korero Māori with him. I don’t really know how to explain that — but the language seemed to bring us closer together

He’s 68 now and still working 10 hours a day, 6 days a week. He should have retired three years ago, but it goes against everything he knows to be idle. He ticked over 33 years with the same company last year — their longest-serving employee. Barely a sick day to his name. Hardly someone you’d call lazy.

The first time my dad came to visit me in Stonefields, he stood on the pavement and looked a bit bewildered. He pointed out different landmarks. The roundabout near the cafe where they found the kōiwi, the bones, that closed the quarry for days. The spot near the cliffs where they filmed, apparently, Xena: Warrior Princess.

“Auē! There was plenty of watercress down there where your house is, too,” he said, licking his lips at the memory.

Each morning, as I walk around this suburb I now call home, I know that the mountain watches. She watches my kids, too, as they ride their bikes to school, play tag in the playground, run home in the rain. From terraced gardens to film sets to the diggers that hauled rocks to make way for the house that I now live in. The presence of this mountain reminds me that she remembers it all — and that mine is but one more chapter in a story that goes on and on.