“I expect more from you” 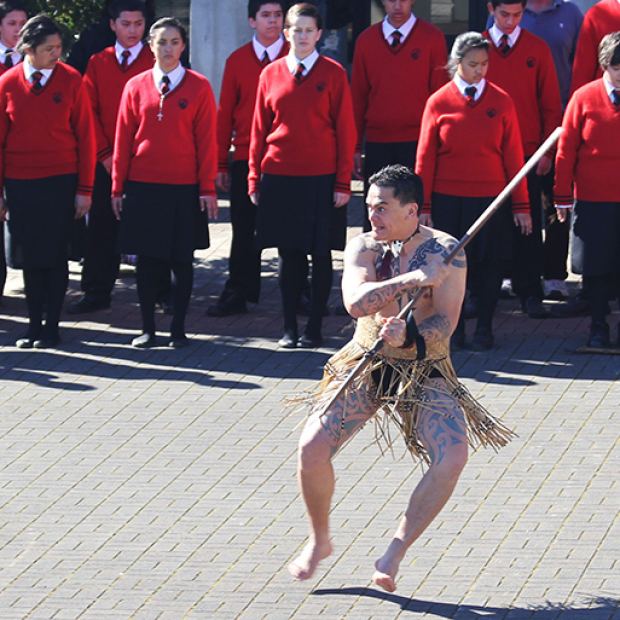 For a number of years, Lloyd Ashton provided Mana magazine with many of its more memorable stories. These days he uses that talent for Taonga, a quarterly published by the Anglican Church.

Here’s an excerpt from his Taonga feature on the Rev Tony Brooking, an unusual priest from Te Tai Tokerau, a Harley rider, a brother-in-law of Kelvin Davis, a theological student, and the chairman of The Redeemed Motorcycle Ministry.

You could struggle to detect early signs that Tony Brooking would wind up at St John’s College. 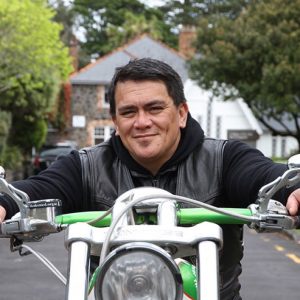 Tony was born in Auckland in 1973. His Dad, Rodney, who had Ngati Porou links, had returned from two tours of duty in Vietnam and married Elizabeth Hoani, who has Nga Puhi ties.

But Rodney died when he was just 31 – an Agent Orange victim, his whanau believe – leaving a young widow, their seven-year-old daughter, and Tony, who was five.

Liz moved north to Kaikohe, to her parents. Tony’s grandparents were strict old-school Roman Catholics, and Tony would troop along with them to St Anthony’s, the local RC church. He even became an altar boy there.

Soon enough, though, Liz met another man. They had two children of their own – and the man brought nine kids from an earlier marriage. So there were 13 kids in their house. All kinds of turmoil, too, says Tony.

As a teenager, Tony began hanging out with an uncle in Rawene who was into motorbikes, music, drugs and alcohol. That’s when Tony’s love of bikes kicked in. He didn’t stint on that other stuff either.

Tony was also a handy rugby league player. At 15, in fact, he was playing senior league. But most of his league teammates also belonged to the local bikie club, and he began running hard there, too.

Two things happened to jerk him free of that scene.

The first came after he’d played in a tournament in Rotorua. Tony had starred. Helped his team to win the comp. But as his Motorcycle Club president was driving Tony back north – he’d demanded the MC regalia back.

“You’ll always be welcome amongst us,” he’d said to Tony. “But as long as I live, you’ll never be a patched member of this club.

“Because I expect more from you.”

The second shock came at his grandmother’s tangi. Tony was 22 when she died, and it fell upon his shoulders to speak. So he’d got up, mumbled a few words and sat down. Humiliated. Whakama. Ashamed by not knowing his language, or his taha Maori.

“I thought – Man: this is huge. I’d not long had my first child and I thought – I never want my son to be in this situation. I didn’t want him to grow up not knowing who he was.”

He quit the booze and the drugs, and checked out some reo-learning programmes – which didn’t appeal to him. But then he landed a job with a Kaikohe Trust, reaching out to youngsters who were on the police radar.

“I knew rugby league and sports, and I thought: surely these kids will love that. So on day one I took them down to the park – and they hated it.

“All they wanted to do was to play Spacies, and to fight each other.”

But when they drove back into the Trust car park there was this Maori guy, with a long stick, practising moves.

“He was a Ninja,” says Tony. “They couldn’t take their eyes off him.

Turns out that this guy was practising mau rakau. There are eight rungs on the mau rakau training ladder. To reach each rung, you not only have to show your chops with the taiaha – you also have to prove a certain level of competence in te reo Maori, and in matauranga Maori.

They signed up for that. They’d train together twice a week, and spend one weekend a month on a marae, somewhere – and the kids couldn’t wait to get there.

Tony moved eventually to Sport Northland, and from there to the Ngati Hine Health Trust.

But he didn’t move on from the mau rakau. For 15 years, he stuck to those monthly disciplines, and he’s now one of a handful to attain Pou Waru status, mau rakau’s equivalent of a Black Belt.

If you want a glimpse of what that looks like, check out broadcast highlights of Sir Paul Reeves’ State Funeral in August 2011. At the outset, two warriors sprang out across the cathedral forecourt to make a dramatic wero to the pallbearers carrying Ta Paora’s coffin.

One of the warriors that day was Te Hira Paenga, who is a deacon at Holy Sep.

And the other was Tony Brooking.

If this has whetted your appetite to find out more about Tony’s life – his growing up, how he became an Anglican priest and how bikes feature in his life now – check out the full story, in the Advent issue of Taonga magazine. That’s available online by clicking this link.