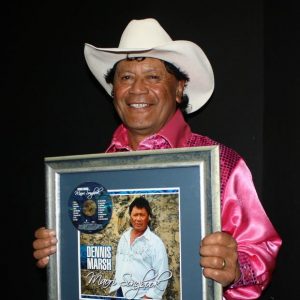 You don’t get too many singers with a career trajectory like Lorde’s. But Dennis Marsh has carved out a path almost as hard to match.

He was 60 when his album Maori Songbook made it to Number 1 on the Kiwi charts three years ago – and he was a couple of years closer to pensioner status when he came up with his second chart-topper, Country Songbook.

We’re not just talking about our country music charts either. Dennis was heading the overall NZ Top 40, where those chasing him at the time included Adele, Britney Spears, Radiohead, Bruno Mars and even a young Lorde.

Dennis says he thinks Maori Songbook “must have come out at the right time” to hit the top spot.

“I never jumped all over the place,” he says. “I went ‘wow’ and then kept going. You’re not there for long.”

Well, kinda. Maori Songbook stayed in the NZ Top 40 for 26 weeks. And now, after 25 or so albums, Dennis is arguably the highest-selling Kiwi country artist we’ve ever had. By some estimates, he has sold close to half a million albums.

The Dennis Te Uhi Marsh story starts on the veranda of an old Te Kuiti homestead, where he was born in 1951. He was the third of nine kids – a consequence, he reckons, of his mum and dad having no power, and therefore no TV, in those days.

His dad Hughie (or Uncle Juicy as he was commonly known) managed farms for Lands and Survey, so the Marsh whanau moved around a fair bit in the King Country, including stints in Te Kuiti, Taumarunui and Taupo.

His mum, Arohaina Otimi, (or Aunty Tim) was Maniapoto and Tainui, while his dad was Te Arawa. The family also had ties to Nga Puhi, Ngati Hine and Ngati Tuwharetoa. That was a handy bunch of connections for Dennis when he later started touring the country.

Music wasn’t a massive deal for Dennis as a kid, even though he was the top (and only) squeeze box player at school in Turangi and he could impress the farm workers with his version of ‘Click Go The Shears.’ Charging about outside, riding horses and swimming in creeks was more his thing.

Everything changed though when he finished school and shifted to Auckland. He’d enrolled to do a building apprenticeship and lived in the United Maori Mission hostel in Mt Eden. There he encountered more rules than he had in Turangi, but also more vocal harmonies.

The boys in the hostel would get out the guitars most nights and Dennis would sing along. Church also became a bigger factor, so gospel music became a part of his repertoire.

There was more church, too, after he left the hostel, when he joined the Evangelical Maori Fellowship at Mangere. He led the youth club there, which he suspects became the largest one in the country.

“We’d pick the kids up and try to shift them into a different direction,” he says. “That meant lots of music, but also basketball, rugby, volleyball… whatever we thought would keep them engaged.”

Country music wasn’t on Dennis’s radar until one of the older guys from the church, Willie Winters, dragged him along to the Manurewa country music club. At first, Dennis just checked things out. But a week later, Willie had put his name down to sing.

“I sang one song,” says Dennis, “and they clapped and cheered.” That was Help Me Make It Through The Night by Kris Kristofferson. When the crowd asked him to sing another, there was a problem – he didn’t have another one ready.

That night was a heady and addictive experience, so he started polishing up more numbers. Soon he was performing in senior citizens’ clubs across Auckland and he was opening shows for established acts. He didn’t quite know the system, though, and remembers being growled for doing encores, when just filling his allocated time and then dutifully stepping aside for the headliner was expected.

It was the senior citizens, though, who gave the impetus to his recording career. After performances, he’d be asked if he had an album to sell. He’d say he couldn’t afford one. But they told him they were happy to pay in advance and, in $15 instalments, he quickly had enough dollars to hire a studio.

By the time Dennis recorded his first album, For You, it was more than paid for by his growing fan base. He then hand-delivered the cassettes – this was 1989 – to everyone who’d helped make things happen.

Having ordered more cassettes than he’d pre-sold, Dennis thought local flea markets might be a useful place to move some more. So it proved, and over the years he’s been a regular at markets in Manurewa, Otara, Avondale, Takapuna and in his current hometown of Pukekohe. He’s also had distribution deals with some of the big operators, as he does with Sony now. 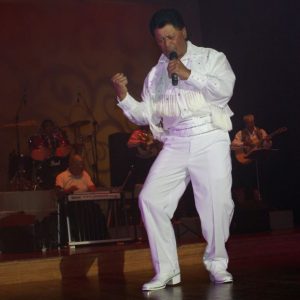 Growing up when Dennis did, he couldn’t help but be influenced by the likes of Elvis and Marty Robbins. But he says it was three Kiwis who were his real teachers – even if he didn’t get a chance to meet any of them.

“Prince Tui Teka was my biggest influence,” he says. “I was amazed at his ability to share himself with people. I always thought that if I could be half as good as him, and half the size, I’d be half OK!”

Billy T James and Howard Morrison were his other main men.

“That’s probably where I am right now,” says Dennis. “I’ve got a bit of Tui, a bit of Billy and a bit of Howard.”

Billy’s death in 1991 was especially significant for Dennis, who was still finding his place in the entertainment world when he drove down to the tangi in Ngaruawahia to pay his respects.

“I spoke in English and Maori,” says Dennis, “and told Billy: ‘I’m going to give back to you what you’ve given to me.’ So I sang and told jokes.

“Then I stood up on the seat – and there were people everywhere, all the entertainers – and I started yodelling. It brought the house down.”

Dennis finished by again thanking Billy and acknowledging that, compared to Billy, he was just a kid. Afterwards, one of the elders gave him a telling-off that he still recalls with a proud smile two decades later.

“You are not a tamaiti nohinohi,” said the kaumatua. “You are not a kid. You have more mana in this marae than you’ll ever know.”

A couple of weeks later, Dennis went home to Te Kuiti. He got a hug from his mum at the door. That was normal. But then, for the first time ever, his dad skipped the regular handshake in favour of a hongi. It turns out mum and dad had been listening to Tainui’s radio coverage of Billy’s tangi.

“We heard you singing and telling jokes – even yodelling,” said Hughie. “It was fabulous.”

Billy’s death was significant to Dennis for another reason too. He felt a kinship because they’d been born around the same time and here was Billy dying, at 43, of heart failure.

At 42, Dennis had his own heart problems and had a heart operation, which saw him inheriting a pig aorta. Unfortunately, as Dennis puts it, the pig died 14 years later, so he had to have another op. And that brush with his own mortality has left him really appreciating these extra years and experiences as an older performer.

“This has been an absolutely incredible journey,” he says. “The last 20 years – from 42 until now – especially.”

Eddie Low, another legend of Kiwi country music, has watched Dennis from close range. The pair have toured together in recent years and Eddie’s theory is that having a Maori flavour helps explain Dennis’s success.

“When Maori do country,” he says, “the Maori sound often dominates the country sound. There are different tones and vibrato. We don’t necessarily sound all that country, but it’s a sound New Zealand warms to.”

While Dennis doesn’t write songs, and his guitar playing, by his own admission, isn’t threatening the guns like Gray Bartlett, his voice and performance are now both very polished. His song selection for his albums, which always include an Elvis cover, is another winner.

The wider acknowledgement of what Dennis can do has led to him hosting radio and TV shows, and he’s asked to work alongside many Kiwi entertainers. Among his recent projects has been teaming-up with Temuera Morrison to record Tui Teka’s E Ipo.

But there are new fields to conquer – and none more ambitious than the project that he and his wife, Yvonne, have taken on lately: the opening of a brand new theatre in Tuakau, just south of Pukekohe. The theatre is on the grounds of what once was a Marist Brothers school and later Felix Donnelly College.

The plan is that Dennis will still tour from time to time. But that the Chapel Theatre at LaValla will be a home for fans to gather and savour the old favourites like Hangi Tonight, I Only See You, Blue Darling, Maku, E Ipo, Blue Smoke and How Great Thou Art.

Dennis regularly performs at The Chapel Theatre at LaValla in Tuakau. www.lavalla.co.nz

Dennis is currently recording a second series of ‘My Country Song’ which, in time, you’ll be able to catch on Maori TV. www.mycountrysong.co.nz