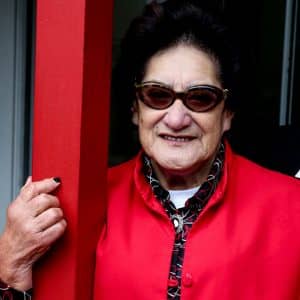 This is an extract from Kia Pū te Wai o Pareira — He Kōrero a-Whānau, a Waipareira publication featuring interviews with some of the people who became part of Te Whānau o Waipareira — the urban Māori authority which has grown, since the early 1980s, from its original base at the Hoani Waititi Marae in West Auckland.

Here West Auckland luminary Dame June Mariu — who’s been a teacher, past president of the Māori Women’s Welfare League, and a former Silver Ferns captain, among many other things — tells her story of her links with Waipareira, and with the marae, which was named after her uncle.

I was born down in Hick’s Bay, Te Araroa. That was the big township. And we all stayed at my grandparents. My grandmother was English — Ellis Angle from England. She came over and she was teaching from Hick’s Bay.

My grandfather, real Māori he was. No trouble for him to charm that little English lady off her feet. I said to my grandfather one day: “Good on you, Papa. Good on you.”

But he was a gentleman. And he was one of the lucky ones. He went to Te Aute College. So he had gone through the system.

Then we moved up Cape Reinga way, Whangaparaoa. Not long after that it was all school and then I came to Auckland. I came here and I thought: “What on earth!” I really just wanted to go home and stay home. I came to go to Queen Victoria School for Girls in Parnell.

Oh, did I hate that school! I hated it to start with, but then I shall always be grateful to Queen Victoria, because I got rheumatic fever and was in the hospital. It affected my heart. But then I had the good fortune of the staff and their care. They made sure I did as I was told. They made sure I didn’t go downstairs.

It was horrible — but I was lucky. I was able to do things later because it all healed up. So I shall always be grateful to Queen Victoria School and their staff.

From there, I went to teachers’ training college in Auckland. Then I taught for quite some years. I started at Napier Street School. It was a hardcase school, but you learned quick. Finally, I went back and taught at Queen Victoria, where Miss Berridge was still the principal. I was strong and healthy and I was able to play netball and all those sorts of things. That was my life. Teaching, playing sport — a good life.

All the Māori used to go down to the Māori Community Centre in those days. That’s where a lot of us met our husbands. And I met Joe Mariu from Taupo. He was Catholic and I was Anglican. And when, eventually, we decided to get married, he had to go tell his father.

I’m not a very good Anglican so there’s no use me changing to anything else. But that’s how we got married. His family stayed outside, but then came in for dinner. Well, that’s fair enough. That’s just how they felt.

The way I got to settle in West Auckland was that one day my husband said: “Hop in the car.” And he took me to Te Atatu and showed me this section. And I thought: “What a mess.” Blackberry, gorse, etcetera. That’s all I could see.

But in Te Atatu there is sea on that side, and sea on that other side. Lovely spot. Anyway, he found it and he decided to build there — he was a carpenter. So we’ve been there for a long time now, around 60 years.

If you look around today at Hoani Waititi marae, there is a total picture here. From babies to adults, kōhanga reo, kura kaupapa, high school. And, of course, Māori is one of the basic subjects as well as tikanga and all things Māori. Māori language is certainly living here. It won’t die here. Kids are taught speaking Māori all the time. It’s lovely to listen to actually.

The way that I got involved in te reo is that I got a job teaching at Rutherford College in Te Atatu. I was teaching health and sport. Māori was just coming in then and the principal called me in one day and asked: “How would you like to teach Māori?”

I said: “I like what I’m doing — sport and health.” It all tied in with the Māori Women’s Welfare League and I enjoyed that. And he said: “You’re the only Māori on the staff. We need someone to teach Māori.”

I’d heard Māori all my life through my grandparents and parents and people around me, but we had been thrashed into learning English and so my own language was not very good.

The principal was really quite cross. He said: “Good God, woman. Your uncle (Hoani Waititi) wrote the book.” And I said: “Oh, that’s right. He lived with me while he was doing that.”

So I taught te reo by the book, Te Rangatahi. I swear by that book as a teaching tool, not just because Hoani Waititi was my uncle, but for the reo.

And, of course, it was interesting for me because lots of his stories were based on where we all lived. So then I started teaching Māori and we got into Māori kapa haka and all that sort of thing. We started winning — and you get carried away, don’t you? So I enjoyed that time, teaching Māori.

I thought I was going to teach forever. But you sort of get ideas about what you want to do. You get caught up with the action, I think. But it was inevitable that I tied up with John Tamihere and Waipareira.

Waipareira sounded exciting. It sounded like what we needed. Although we did have the Māori experts, we needed people who’d been grassroots and had the skills to move us forward. Otherwise, we stray off sometimes. And John knew what he wanted. You need people like that. People who zoom ahead and are prepared to have a go. That’s exactly what he’s done. Waipareira is always looking for what’s best.

Health is a big issue. There are a lot of challenges that affect our health. I always believed in mahi te kōpū o te wahine, ki te kōpū o te whenua. It starts with women looking after themselves. We’ve got to get to that, where they look after their pregnancies. Then look after the babies, nurse them all the way through.

Some of the things that are done at Hoani Waititi are to prepare kids for parenthood one day. It’s important that we get child rearing right. Parents need to know how to look after their children.

To be healthy you need skills, and that includes connections and social skills. These days there is some lack in social skills, because all you see of a young person is the top of their head — you don’t see their face because they’re busy on their phones. So that to me is a lack of social skills and interaction. They’re busy interacting with their phones!

Ideally, to be healthy, it would be lovely if they learn Māori and tikanga, because with that they learn the basics of wellbeing first for family. That’s what I understood from teaching. That we need kids growing up with those ideas in their mind firmly. That when they grow up, their children are going to be healthy, their children are going to get what they need, to do their best at school and get a good job.

And if the basics are not taught in schools, then it’s taught at home — or should be. They can at least re-affirm it in the schools. Schools have got a hell of a job of their own, with training kids in the language and job skills too.

And we need new options, such as an alternative education to make sure that we’re picking up the loose ends, to make sure our kids cope well with the system and get the jobs that we need them in — the nurses, the doctors. We need to make sure that we’ve got the opportunities for our kids, where they feel at ease and happy to learn and move forward.

Wellbeing is about the parents bringing kids up right. Look after your kids. And, if you’ve got a family around you, lucky. If you don’t, you’ve got to do something, to make sure they’re safe. Sometimes this doesn’t come from their own parents — it doesn’t matter.

Those ordinary things have to be carried out for the kids to live a normal life and work. This is just straight love. So you need heaps of people working on this issue. Some people would be working with the parents, some would just take the kids.

Mahi to kōpū o te wahine, ki te kōpū o te whenua. That’s when you care when they’re born, right through to when they die. They’re your child and the community’s child. Māori are lucky, Māori all gather around and help. It’s just automatic in Māori circles. If something happens, you’ve got to work together.

So, in my lifetime, I’ve seen us go through the business of the reo. We’ve gone through pushing the reo through kura, through kōhanga. And now we’re telling them: “Speak it in your homes as well.”

The needs are quite plentiful for our people, and if we don’t give them the opportunities, the needs won’t be fixed. So we’ve got to look at fixing that to get anywhere.

So, for me these were some of the ideas and life experiences growing up. Queen Victoria School had a lot to do with my life, and also teachers’ training college. For now, I’m lucky to be here. I’m 84. Not too many can get to this!