It all started with Ten Guitars 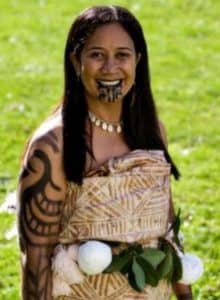 We’ve done a fair few te reo stories on e-Tangata. But it seems you can never have too many, especially in the face of recent pronouncements on the state of the reo, and its usefulness, from a few Pākehā men (Paul Moon, Bill English, and Mike Hosking). Perhaps the best response to that was on Twitter, under the hashtag #LetsShareGoodTeReoStories, which produced hundreds of tweets from New Zealanders — celebrating, supporting, and loving the reo.

Here’s Christine Ammunson with hers.

It was a cold Wellington night in 1991, and we were settled in at the Dungeon bar, deep in the basement of the old Royal pub at the bottom of Lambton Quay. Jugs, screaming laughter, and guitars. Māori students, public servants — the Department of Māori Affairs was right next door — factory workers, and the rest of us.

My mate, who worked for the Māori Affairs Select Committee, heard some young guys had returned to the city after spending time living back in their papakāinga — and when he saw them at the top of the stairs, he grabbed my coat and put a scarf over his head, jumped on a chair, and performed a high-pitched, nasal karanga to them as they walked down.

The pub fell about laughing.

Ironically, I ended up marrying one of those guys, even though his first glimpse of me was as I fell off my chair laughing at his expense.

Some of my mates were reo speakers. The ones who were native speakers (often from Tūhoe or Mataatua) reminded me of my Samoan family — I could tell from the way they spoke English that they were second language speakers. Like my mum and aunties, when they were in the throes of emotion, they unconsciously switched back to te reo.

They were also quite formal at times, particularly at times of farewell. After spending the weekend together partying like mad, they were the friends who would say a formal thank you speech to our seriously hungover flat on Sunday afternoon.

These were the mates who spoke just te reo to me a lot of the time, and I was so grateful for these immersion experiences. Others, like my soon-to-be boyfriend, had gone back to learn the language that their parents had been denied.

So, as fun as guitar parties were, the fact that they were often in te reo meant there was a serious side to the partying — speaking, singing, or telling jokes in te reo was also a political statement.

The other thing about Māori student parties back then was the diverse kind of people you’d meet. From politicians to gang members, senior government officials to hairdressers, and famous tino rangatiratanga advocates.

You never knew who might be waiting to use the loo after you.

My other half remembers he and his mate talking to one another in a lift one day, when an older Pākehā man angrily butted into their conversation and told them off for being so rude.

When people at the parties were speaking te reo, I realised that if I wanted to get the joke, be in on the goss, or sing the waiata, I could either try to join in, or I could tune out and miss out on everything.

I’m far too nosy for that, so I learned to listen intently, and every now and then I’d kōrero back. A few beers definitely helped get rid of the nervousness. This was the beginning of my very humble conversational te reo skills.

I remember sitting one night with Māori journalists who were discussing some well-known person’s affair. A Pākehā journalist who worked for a mainstream daily asked me if I knew what they were saying. I nodded. He sighed and said he wanted to learn Māori so he could break the stories he knew my mates were talking about whenever they switched to te reo so he couldn’t understand.

One of my girlfriends heard him, and she turned around and grinned: “Haere kōrua ki te kōhanga reo pea?” She knew I was checking out a kōhanga for my baby the next day and suggested I take him. I burst out laughing and told him what she said. “Very bloody funny. Maybe I just bloody well will!” he retorted.

Our baby’s first language was Māori. His father didn’t speak anything else to him, and he was going to kōhanga reo, so I had to learn some more te reo as well. And so did my Samoan family, who immediately fell in love with our aiga’s first grandchild.

My mum rationalised that we were in New Zealand and the boy was Māori: speaking Māori was something we should help him with. She had te reo stickers all over her house.

My sister remembers the day she said “love you” as she dropped him off at kōhanga. He shook his head. “Kāore, aunty. Kāore kōrero Pākehā ki roto i taku kōhanga reo.” He gave her a hug when she looked sad. “Kei te pai, aunty. Kei te pai, aunty.”

When he was four, he spoke his first words of English. I’d asked him: “Kei whea to peke?” (Where is your bag?) He pointed at his backpack and self-consciously but proudly replied in a thick Māori-Samoan accent: “E Mama, isss ofa dea (it’s over there).”

Twenty or so years ago, there were some who predicted that kōhanga kids would miss out in the real world and wouldn’t be able to hack it.

But our little person has turned out just fine. In a few weeks, instead of heading up to Victoria University for kōhanga reo, he’ll be heading to his third-year law classes. And he’s not the only one. He’s up there with several of his classmates from kōhanga.

Over the years, we’ve helped with kids kapa haka in our community. And the way non-Māori kids take to te reo and tikanga is something that still makes me smile.

Just over a year ago, every Wairarapa child and school gathered at the rugby park in Masterton to break the world record, as together they performed a haka about their home. I was in the grandstand with my mother-in-law, who’d been hit for speaking te reo when she was their age. Her moko was one of the haka leaders, and, along with many of us, she cried as we saw our Wairarapa kids not just performing a haka, but writing a new chapter in the history of our region.

So the other day when Ngarimu Blair of Ngāti Whātua Ōrākei began #LetsShareGoodTeReoStories on Twitter, with the story of his Pākehā grandad going to te reo courses so he could pronounce his grandchildren’s names properly, I wanted to share some of mine as well — including those from the pub and the guitar parties.