Embarking on a journey into the unknown 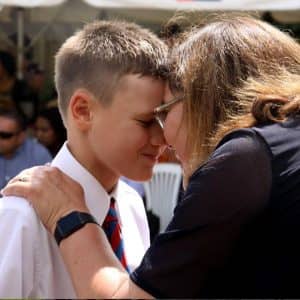 Last Saturday, while the country commemorated the 176th year of the signing of the Treaty of Waitangi, our boy started boarding school.

It’s purely a coincidence that the pōwhiri for new students at Hato Pāora College in Feilding fell on the same day as our national holiday but, as a descendant of one of those early signatories to the Treaty, the great Ngāti Hine chief Te Ruki Kawiti, it seemed fitting to me.

Kawiti is our son Cormac’s middle name. We chose it to tie him to his whakapapa — and because the stories I had heard about Kawiti left a lasting impression on me. He was a strong and visionary leader, highly intelligent and respected by both his friends and enemies. He had a reputation as a peacemaker, but he didn’t suffer fools. The battle of Ruapekapeka, with its intricate maze of tunnels and trenches, is a testament to his military genius.

Kawiti was also outspoken politically. He was fiercely opposed to the Treaty and warned that it would compromise Māori sovereignty and lead to the loss of Māori land. So he was pretty wise, too.

Despite Kawiti’s opposition, however, he did eventually sign the Treaty. In fact, his name appears first on the document, above Hone Heke’s. There are different explanations for Kawiti’s turnaround. Some say he was pressured by his people into signing, and did so with great reluctance. Some say that with the declining population of Māori, he saw the writing on the wall.

While we can never really know what Kawiti was thinking, I like to imagine that whatever his reservations, when he signed the Treaty of Waitangi, he had great hope for the future.

We carried the same hope last weekend, as we packed our car with all the worldly possessions of our 13-year-old boy and made the journey to Hato Pāora.

I prepared for the impending farewell like any normal mother. I looked in the mirror and had stern words with myself about not causing a scene. I avoided thinking about the six weeks until we would next see him, and the five years of boarding school looming on the horizon like a mountain. I stuffed a wad of tissues up my sleeve and donned black shades as if I was going to a tangi.

Yet in all my imaginings of this day, I hadn’t prepared myself for the sense of joy and celebration I would feel. As our boy took his place among the 43 other new students in crisp, white shirts and too-big blazers, my fears for him didn’t so much dissipate as transform into pride.

The decision to send Cormac to boarding school wasn’t easy. There were many factors to consider. We did our research over several months — from NCEA results to ERO reports, to long and detailed conversations with the principal, Debra Marshall-Lobb.

We listened to the views of everyone, from the knowledgeable and experienced to the opinionated and ignorant. We drew up a budget. We lost a fair bit of sleep.

What I didn’t quite appreciate until we gathered at the gates to Hato Pāora, was that, as parents and whānau, we weren’t alone. We all worry for our boys. We all want the best for them. There were more than 400 people at the pōwhiri — that’s about 10 per kid. And I wasn’t the only one among them wearing dark shades.

The whānau at Hato Pāora — and it does feel like a whānau — appreciated the significance of this day.

“You are entrusting your boys to us,” the chairman of the Trust Board, Bernard Te Paa, said during his whaikōrero. “Rest assured we will do everything in our power to look after them; to nurture them and build them up and return them to you in five years time as great men.”

Each boy was called up by name and led by two kuia, one on each arm, across the marae ātea to the waiting principal. When it was Cormac’s turn, his smile was wide and there was no hesitation in his step. I wondered what our country would be like if all our kids were made to feel this important on their first day of college.

One by one, the boys took their place as the tēina (younger brothers) behind their tuākana (older brothers). When they were settled as part of the Hato Pāora whānau, Pā Bernard smiled and told us there was a resting bay along the driveway where we could pull over and have a tangi.

In the end, though, I didn’t need it. There were no tears. Just excitement and anticipation. After the pōwhiri, Cormac hung his number 1’s on a hanger for the very first time and, while I stood outside his dorm locker wondering exactly how to say my final goodbye, he squeezed my hand and tore off to the pool for a swim with the other boys.

In that moment, I realised that he was ready — even if I wasn’t.

Some whānau have long and proud traditions at boarding school stretching back generations. At Hato Pāora, the names Tibble and Crawford and Simon appear on the commemorative boards of the wharenui year after year. When we took a tour of the school back in September, the Year 13 student showing us around pointed to the blue and red blazer on the wall and said: “That was my great-great-grandfather’s.”

There is no blazer inside the wharenui belonging to Cormac’s great-great-grandfather.

But he does have his name.

Looking back, I only had a very superficial understanding of the weight and importance that a name can carry in te ao Māori. When Cormac was born, we never expected him to fulfil the mana of Kawiti’s name. I would never have wanted to burden him with the weight of unrealistic expectations. I wanted only for him to have a connection to his whakapapa since I had grown up with every trace of mine erased.

Yet te ao Māori works in strange ways. As we drove away from Hato Pāora, it struck me that leaving home at 13 to embark on an unknown journey, with all the hopes of your whānau resting on your shoulders, as Cormac and his 43 peers have done, takes a lot of courage.

Just the kind of courage that Te Ruki Kawiti must have needed 176 years ago.