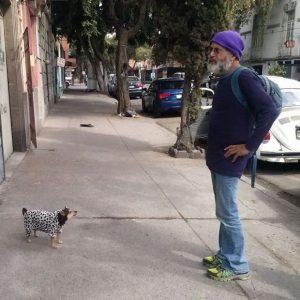 In Mexico, when I couldn’t get my message across in English or pidgin Spanish, my solution was to break out in te reo Maori. It didn’t always deliver what I wanted, but it put a smile on the local faces. And another bonus was that they seemed to realise I wasn’t an American. Maybe I was just another brown native like them.

English, so I discovered as I travelled, isn‘t really welcome on the Mexican side of the United States border. That’s because it’s associated with the numerous colonisers who have exploited the Americas over the years, beginning in the 16th century with the Spanish.

The US is just the latest to put the squeeze on economically by using subsidies to protect US farmers from South American competition – and, at the same time, using South American labour as a cheap labour pool.

This policy was certainly visible in California, where I recently spent some months looking after my two mokopuna with my daughter. In San Francisco, you could see the Latinos (as they are known in the US) gathered round certain intersections waiting to be hired for the day. The pay isn’t much because most of the men are illegally in the States with their families, and they have to take whatever work and pay is available.

They have no unions or official status but share an uneasy alliance with the government. On the one hand they are publicly condemned as illegal aliens. On the other there seems to be little effort to prosecute their employers.  While I was there, legislation was passed allowing the illegal immigrants to get a driver’s licence, possibly for safety reasons. Officials specifically said there’d be no prosecutions for those supplying information.

I got to know one of these men who came from Guatemala over 10 years ago. He considered himself lucky to have had his current job as a handyman for so long.  Let’s call him Rangi. He could turn his hand to any task inside or outside the house or, should I say, mansion. Rangi particularly liked our youngest moko and we used to visit him on the property.

We shared food, such as tamale – corn meal dough with rice, meat and beans. We shared some Spanish language, and I learned that abuelo means koro or grandfather, abuelita is a girl moko, and abuelito is a boy moko. Most of all, though, we just enjoyed some heart to heart.

The downside was seeing how he was treated by his employer. It wasn’t outright racism. Just the subtle use of power to secure an advantage – and being taken for granted. For instance, one week it was his pay that didn’t arrive. Cash of course. Another week he was overseeing a group of Latino men working to put up a stone wall as part of a grand entrance.  The men always had the Latino radio station on playing the upbeat rhythms, but this day it was English language, Solid Gold radio. The reason? The Pakeha boss was on the job. He couldn’t understand the language, so he changed the station.

So from ‘Rangi’ I got a small introduction to the heart of Mexico. I’m not sure he understood much of what I told him about Aotearoa and how Maori and other Polynesians live down under, but much was said through his caring attitude to my mokopuna and through the time we gave each other. The day I left, we cried.

I think I took this experience with me. First to the Latino district of San Francisco where my wife joined me for the start of our American holiday, and then on to Mexico.

My goal was to use Spanish to order food and use public transport and facilities without resorting to English or sign language. I had my sister’s old phrase book, Maori pluck and that good experience behind me.

So when I couldn’t be understood, I found out that reo Maori came bubbling up and out. I saw other frustrated travellers raising their voices when they couldn’t get across what was on their mind. Then I remembered something that Dad told me when I was learning to speak Maori. He said: Don’t worry about the grammar. Language is music. So sing it.

That I guess is what I did in Mexico. Having a good korero in te reo Maori would release my frustrations and calm me down. I was making sense to myself and making music at the same time. And it wasn’t just me benefitting. My wife says she noticed a change coming over whoever I was talking to.