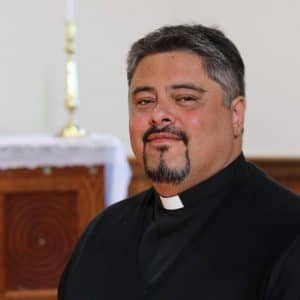 “2016 has been the story of that first Christmas played out once again,” writes Rev Don Tamihere, the next Bishop of Te Tairawhiti in Te Haahi Mihinare (The Māori Anglican Church).

“The story of the refugee, of the marginalised and judged young woman, of the ‘vulnerable child’, and of the communities of the poor facing persecution and exploitation from the insanely wealthy, powerful and privileged.”

Two thousand-odd years ago a child was born in a stable. This child was born to a humble young woman, herself very vulnerable to the judgmental and exploitative culture and politics of the day. Hers was a society that celebrated strength, wealth and power — no place for a young woman without economic means, and especially not one who would give birth to a child in the discomfort, poverty and instability of a stable.

Of course, this was no ordinary child. This was the one who would be called Emmanuel — a name from the reo of his iwi that meant “God is with us.” His birth presaged a change in how we were to view the world — that the child, even one born in a lowly and humble place, is a taonga beyond value.

The circumstances of the birth were potent, revolutionary signs of change. The witnesses to the birth were shepherds, among the most marginalised groups in this power-drunk society. His whāngai father was able to claim a majestic whakapapa but lived on the edge of a culture that revered the material wealth and trappings of empire. Soon after his birth, three wise immigrants came to celebrate this event, elevating it above local frustrations and reminding all that the world is interconnected and interdependent. The whānau then had to flee the wrath of an insane ruler, joining the flood of refugees desperate to survive.

The celebration of Christmas in Aotearoa also had a high-profile beginning. On Christmas Day, 1814, the Church Missionary Society leader, Samuel Marsden, landed at Oihi, led there by the rangatira Ruatara. Ruatara had been out across the globe seeking knowledge and meaning from these new people, and had found in Marsden an ally who could advance the interests of Ruatara’s hapū.

Marsden however — my ecclesiastical forebear — had another agenda. He brought a “civilising mission”, seeking to “convert” Māori not only to the path of Christianity but to the ways of England. Marsden believed that to be Christian, Māori would also have to adopt English ways, and give up the culture that my tīpuna had formed and shaped across thousands of years and endless miles as they migrated across the Pacific.

The message of Christmas, that the way of greed and domination was not what God sought from creation, was at a tipping point on its arrival in this land. Although the early missionaries had their moments of insight and awareness, they were also the harbingers of colonisation, ultimately unable to separate their faith from their culture.

Soon, led by the semi-genocidal wars of the 1860s and 70s and the attempted legislative coup-de-grâce that followed, the church of these missionaries became largely just another part of the colonising project seeking to control and dominate Māori.

However, the powerful message of Scripture flourished in the Māori liberation movements of the 19th century, from Pai Mārire through to the Kīngitanga and Te Kooti Arikirangi — and manifesting in the beautiful ideas of Parihaka.

And our own Haahi continued to provide strength to many hapū and iwi, who viewed their Haahi as a vehicle to express their own aspirations. This came to fruition in the work of the greatest of lay Mihinare leaders. Tā Apirana Ngata, in his essentially one-man push for a Māori Pīhopa (Bishop) in the 1920s, resisted the Pākehā establishment (and other vacillating iwi) to gain mana motuhake (self-determination) for our faith.

He sought and succeeded in building “a movement rooted in the Māori heart” incorporating both mātauranga Māori and the essence of the Gospel. This has expressed itself in whare karakia and in liturgy, in kapa haka and in reo experts across the decades since.

2016 has been the story of that first Christmas played out once again. The story of the refugee, of the marginalised and judged young woman, of the “vulnerable child”, and of the communities of the poor facing persecution and exploitation from the insanely wealthy, powerful and privileged. 2016 has been the marginalised peoples reminding themselves that they deserve to exist, that this creation — even under existential threat — was given to them as the most beautiful gift.

That applies to us here in Aotearoa as well. Whether it’s the ownership of water (the beginning and basis of creation), the impact of climate change, or the devastation of economic poverty, particularly here in Te Tairawhiti — we need to remind ourselves of the promise of Christmas. That creation was given to us as the most precious gift, to be celebrated and treasured.