Our kids are rising to the challenge 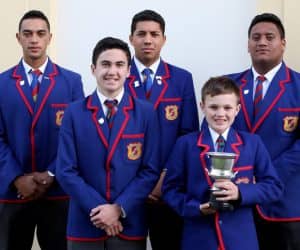 A Catholic education wasn’t something that we ever considered for our kids. It’s not that we had anything against it — it’s just that we’re not Catholic. Not very religious at all, really. Yet in the four months since our son started at Hato Pāora College in Feilding, I’ve been pretty impressed.

I had my first real exposure two weekends ago at the O’Shea Shield, hosted by Sacred Heart Girls’ College in New Plymouth. This annual academic and social event involves 17 schools from the Wellington and Palmerston North dioceses. If, like me, you have no idea what a diocese is, think of it in Māori terms: a congregation is similar to a whānau, a parish to a hapū, and a diocese to an iwi.

The O’Shea Shield is like athletics for the intellect. Events include prepared and impromptu speeches, scripture readings in English and Māori, debates, drama, and religious questions. As a spectator more accustomed to the smell of Deep Heat mixed with oranges and mud, I discovered a whole new set of nerve endings as I sat in the audience that weekend.

Competition was stiff. Half the adults I know would have had a hard job debating the moot: Freedom of expression is more important than religious sensitivities. Let alone delivering a speech to a packed audience with only four minutes to prepare.

I could offer no advice, and tried my best to hide my expression of “rather you than me, kid!” as each student took to the stage for their different events. If their courage wasn’t impressive enough, their humility and support of one another made me prouder still. This didn’t just extend to their team-mates, but to the other competitors as well. During the frequent breaks between events, students from all over the mōtu mixed together easily, playing games and having a laugh.

Yet there were a few things that stood out for me. The first was Hato Pāora’s drama performance — and not just because my son was in it. The drama is probably the most coveted award of the O’Shea. Like the 100-metre sprint final, everyone wants to be there.

Each school has five minutes to perform a skit around a chosen scripture, using only five actors and no props or costumes other than what they can put together using their school uniform. It levels the playing field, demands creativity, and rewards team work.

Some schools spend months preparing for the drama. According to Marg Haimona and Sue Burton, co-ordinators of the Hato Pāora team, the boys only managed to get their drama locked in on Saturday afternoon, just a few hours before they performed. It wasn’t that they didn’t have any ideas; rather they had too many ideas. “It’s the same every year,” Marg told me, sighing and shaking her head.

I didn’t envy the judges in the slightest. Every performance was top shelf. But of all the schools, Hato Pāora was the only one to take their scripture and make it local. We were in Taranaki, after all, the birthplace of the poi and the village of Parihaka. The delivery was typically Māori — that’s to say, funny as hell. But the message at the end was loud and clear. “For the past 156 years,” said Dion Hunt, descendant of Parihaka, “my people of Taranaki have not let the sun go down on their anger, but instead have responded with non-violence and passive resistance.”

It was courageous stuff for a bunch of teenage boys in a town that’s been hitting the news lately. And clever, too, because the challenge was put in a way that made people think, even as they were wiping the tears of laughter from their eyes.

Sometimes, though, a wero needs to be laid down with the utmost respect in places where it might be unwelcome. That’s exactly what Lakan Beech did on Sunday, during the religious questions event. Students were asked to name two corporal works of mercy and talk about the ways in which they practise these works within their schools.

Right from the get-go, it’s a difficult question for Māori to answer. Why? Well, we’re just not used to singing our own praises. In fact, we’re expressly told not to, in the whakatauki (proverb): Kaua te kumara e kōrero mō tōna ake reka. The kumara does not speak of its own sweetness.

But humility doesn’t win prizes and everyone in this competition needs to bring their A-game. Many schools gave wonderful examples of worthy acts of mercy that they’re involved with in the community: food drives for the homeless, working with refugees, comforting the sick.

Hato Pāora’s examples had a different flavour. Rongomau Whaanga, a Year 11 student, spoke of the process of welcoming the new Year 9 boys into their ranks: “It begins with the pōwhiri, and continues throughout the year in all the ways the tuākana (older brothers) seek to nurture their tēina (younger brothers). At the start of the year, they are strangers. By the end of the year, they are part of the whānau.”

Haimona Tipene, another Year 11 student, spoke of the ritual of burying the dead. Earlier in the year, Father Noel Delaney, one of the founding fathers of Hato Pāora, passed away at the age of 92. On his journey home, he lay in state at the school, an honour that recognised his lifetime association with the school and the great legacy he leaves. Hato Pāora College welcomed Pā Delaney’s whānau, looked after them, fed them and made them welcome. The boys celebrated Father Delaney’s life and mourned his passing with waiata and kōrero, then journeyed together with his whānau to his final resting place in Wairoa. It’s a form of outreach, Haimona explained, but they aren’t individual sporadic acts of charity. “This is tikanga Māori. It is who we are and what we do in our everyday life.”

How these examples of mercy were interpreted by the judges, we as spectators will never know. But Lakan, competing in his fifth and final O’Shea, had an inkling. In all his years at the competition, he says, he’s never once had a Māori judge. In his closing statement, Lakan said: “Those of us from Māori colleges feel that we have to conform to a Pākehā worldview to be competitive at this competition. I’m tired of telling my boys that examples from tikanga Māori won’t be understood or accepted as valid. I am a proud Catholic so I have a duty to speak the truth. My challenge to the O’Shea organisers is to be merciful and be sympathetic to answers given from a Māori worldview. These documents we study are so rich and full of meaning, but we should be learning them for life, and not just for points.”

When he finished speaking the whole room was silent. You could have heard a pin drop. And then … thunderous applause and a standing ovation. The boys didn’t win that particular event, but Lakan earned something much more valuable — the respect and pride of his peers. 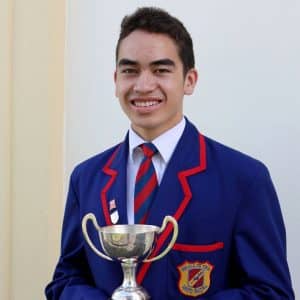 Rongonui-Atea Kahurangi who won the cup for scripture reading in Māori.

The final standout event for me was scripture reading in Māori. This is a relatively new addition to the O’Shea, sitting alongside scripture reading in English. One of the mums told me that when it was introduced there were murmurs it would give Māori schools, who are in the minority, an unfair advantage. “As though English schools don’t already have an advantage in all the other events,” she said.

But people needn’t have worried. Instead of deterring competitors, the introduction of a reo Māori event has only motivated English medium schools, who’ve stepped up and shown they’re just as capable of excelling in Māori as in English. This year, though, the day belonged to Rongonui-Atea Kahurangi. New to Hato Pāora this year, he took away the top prize with his reading of Matthew 18:23-35.

When it was all over, Hato Pāora’s O’Shea team arrived back at school late on Sunday night with two trophies held aloft: one for drama and one for scripture reading in Māori. They placed fifth overall, the best they’ve ever done at O’Shea. Normally, they’re in the bottom three.

I’m told the boys’ homecoming was memorable, with haka and singing continuing long into the night. How great it is to know that our Māori academic achievements are celebrated with the same pride and exuberance as our sporting wins.

There were no trophies for spectators, but I took away plenty of lessons. I learned that it takes a unique sort of courage to compete in the academic world as young Māori in New Zealand today. And, that our kids are totally up for the challenge.