Moana Maniapoto: Hands off our images 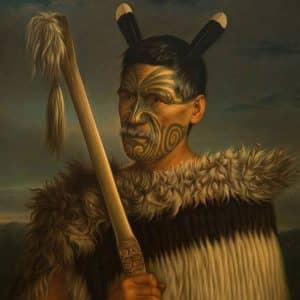 I reckon we’ve come a long way in New Zealand. Yes, we have our fair share of nutters and racists, but I can’t really imagine anyone here plonking an image of Tāmati Wāka Nene on a shower curtain. There’s a lot more awareness since a teatowel with the face of a tūpuna kicked off the whole Wai262 claim in 1989.

Still, there’s no accounting for some people’s lack of taste, or the appetite of opportunists to make a quick buck.

This week, Fine Art America, a print-on-demand website, was bombarded by people who took exception to Māori images being flogged off by people with no connection to our culture.

A number of images from the Lindauer collection had been uploaded on to the website. At the swipe of a credit card, customers could purchase a poster, duvet cover, throw cushion or shower curtain bearing the image of tūpuna, like Rewi Maniapoto and Wiremu Kingi.

Why any human would buy a tote bag with a mokomōkai on it beggars belief. A number of us emailed Edward, the photographer. He removed his photo of the carved preserved head once told it was a bit off. “I used poor judgment thinking of something as just a historical artifact,” he said. “I was horrified to wake up and find out that I had offended a whole group of people.”

Anyone can upload and offer images for sale on any number of similar websites. These can then be turned into prints and framed artworks, or household items. Anything goes. You can pick up a multi-coloured duvet cover of Hitler, or a vintage poster from a slave auction.

There’s nothing to prevent the use of stolen images, either. The parents of an 11-year-old girl were horrified to find that their daughter’s image could end up on duvet covers. She’d posed for professional photographers at a public event. Someone watching had taken a sneaky photo and posted it as “Māori Girl.” Then there’s the photograph of a Māori child in a tree, labelled “Tree Monkey”, which was uploaded by a New Zealand “artist”. No word on how that boy’s parents might be feeling.

Many of the images on the Fine Art America website were removed after the uproar — a victory for people power. But the bigger issue remains. There’s still no way to protect Māori against misappropriation, particularly in the international arena.

Many of the Lindauer tūpuna images were sourced from the Auckland Art Gallery website, despite a long list of protocols about the need for iwi engagement and clearance. Peddlers don’t give two hoots about those. They’re legally entitled to help themselves under the mantle of “public domain.”

Aroha Mead is a longtime advocate for the protection of traditional knowledge. She was a pleasure to watch in action during the ensuing online exchange on the Fine Art America website. Clear. Conciliatory. Restrained. Aroha almost lost it when someone burbled on about “artistic freedom” but managed to hold it in. After 144 comments, the website closed the discussion down and a number of the images disappeared from the shopfront.

While Radio NZ’s Mihingarangi Forbes, Te Kāea and Te Karere were all over this story, the New Zealand Herald posted the most innocuous images from the website, then ran a poll.

Do you think these shower curtains are offensive?

YES, this company has made a big mistake or

NO, international designers can’t be expected to know that this is offensive.

Oh, dear. Showing your colours, Herald. Here are some questions our national newspaper could have posed. “Would you be happy seeing an image of your ancestor or child being sold on a shower curtain without your permission?” Or: “Do you think its about time the Crown fulfilled its Treaty obligation to protect Māori taonga?”

Years ago, the Crown established the Toi Iho Māori Made Mark to protect Māori against copycats and commercial exploitation of Māori-owned patterns and designs. It is a mark of quality and authenticity. Then the Crown dumped it. A group of volunteers (including me), led by Māori arts advocate Elizabeth Ellis, ensure it’s still active. But Toi Iho is nowhere near enough.

This is big picture stuff. Elizabeth recalls years of hard work by the 27 nations of the Pacific Arts Council and WIPO (World Intellectual Property Organisation). They wrote a model law framework for the protection of tangible and intangible expressions of culture. While the indigenous representatives were outspoken, governments (including New Zealand’s) ignored that mahi. And the Crown has been sitting on the Wai 262 report for five years.

“There’s a clear gap in the law that allows these things to happen as often as they do,” says Aroha. “It shouldn’t be up to volunteers to mobilise every time this happens. There needs to be policy, guidelines and legislation.”

And that will get harder with the TPPA and other major trade and investment treaties that will undermine the potential for a Crown-Māori relationship to construct new systems.

I know there are bigger things in the world to be offended about. But for many of us, misappropriation is the thin edge of a giant wedge. It represents the prevailing worldview of a dominant culture within which everything can be commodified. As Jamie Bull, an online commenter, said, no one is going to respect our images if they don’t respect us as a people.

The discussion forum on the Fine Art America website was productive. Some found the conversation helpful. But others just don’t get it — and really don’t care.

Cynthia Decker, a contributor to the Fine Art America site, had something to say to them. “If you were unknowingly standing on the foot of the person next to you, and they said: ‘Hey, you’re on my foot and it hurts,’ would you not move, even if it made you slightly less comfortable? Would you just say: ‘Nope, too bad, my foot’s been there for a while now and it’s not moving. Why should I compromise my foot position for your comfort? Deal with it.’

“If you have it in your power to help someone, to give them comfort, to grant a request, why would you not?”

Here are some of the arguments and rebuttals raised during the discussion on the Fine Art America website.

“It’s in the public domain.”

So what? That’s a legal construct in the western intellectual property system that bears no resemblance to any indigenous belief systems. We do not recognise that. Now that you understand that, you can choose to be part of the solution.

What is the great moral bang for buck in this whole exercise? The freedom of a plagiarist to flog images from a culture they have no connection to?

It’s not art. It’s a cushion or shower curtain. With someone else’s work on it. You want to see artistic expression? Check out some of my favourites: Shane Cotton, Lisa Reihana, Israel Birch, Bob Jahnke, Robert Ellis, Francis Upritchard, Michael Parekowhai, Chris Bailey. To name just a few.

“Why is it ethnic minorities find they have to complain?”

Er, that would be because it’s you white guys who do most of the ripping off. And it’s indigenous peoples’ art, images and knowledge that you’re still helping yourselves to. As Aroha Mead puts it: “Try putting an image of a Coca Cola can on a shower curtain and selling it through a commercial site, and see how long it takes before Coke lawyers send a cease and desist letter.”

“There are images of Native Americans on the site as well.”

And they’re all good with that? You’ve checked lately, have you?

“Tolerance should be on both sides. ‘The others’ should be tolerant as well.”

Our land has been stolen, our culture decimated, language undermined and values ignored, all on the basis of being “the other.” We are the most imprisoned, sick, unemployed, uneducated. We petition, march, go to court, do the haka, make a noise, stand up in parliament, educate, legislate, adjudicate — and still, no armed revolution. Now, there’s a lesson in tolerance.

“It’s far more honourable that people will be looking at these images.”

Says who? We will determine what is honourable. It is not honourable for the image of someone else’s ancestor or child to be offered for sale, even after their descendants or relatives have asked you to remove it. Do the honourable thing.

“Freedom of expression is used as a tool to provoke a group to defend their beliefs.”

Right. You’re doing us a favour? Newsflash. Māori don’t need your assistance to examine our own beliefs, thank you. We are quite capable of doing it ourselves, as artists and humans. And we do. Just turn up at any old hui and watch the sparks fly.