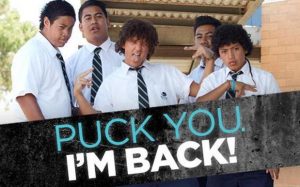 Would Māori Television executives have considered broadcasting a show based on a Pākehā man in brown face paint and afro wig, lampooning a barely literate, violent yet comical Māori teen?

However, they did want to broadcast a show that did all of this, but instead of Māori, the teenager was Tongan.

When we were asked for comment, we urged the broadcaster to consult with Tongan Kiwis: their voices matter when we’re talking about a show that mocks and stereotypes their own.

Māori Television staffers felt that there was a local market for this show and they probably weren’t wrong. You just need to read the social media comments to see there are plenty of Pasifika Kiwis who think Jonah from Tonga is okay, and that anyone who disagrees is PC Gone Mad.

But just because some people think it’s funny doesn’t make it okay, and thankfully there are many more who argue that this kind of show is stereotyping blackface: which it is.

This is an important conversation for New Zealanders but particularly for Pasifika Kiwis (young and old) to have: is it okay for Tongan people — or any people — to be portrayed like this in 2017?

My friends went to a movie about a clown last week and they didn’t laugh once.

Chocolat, or Rafael Padilla, was Afro Cuban, a former slave who started out playing a cannibal savage in a French country circus.

Most of the act saw the cunning, intelligent white clown attacking simple, smiley Chocolat. Padilla was the most renowned black comedian of his time and yet my friends found it hard to sit through the bigoted buffoonery.

In the movie, when Chocolat visited a zoo he was horrified to find African people on show like animals.

Closer to home, we know Samoans and other Pasifika people were also exhibited like wildlife at “expositions” in Europe and North America.

New Zealanders will ultimately decide whether or not shows like Jonah of Tonga belong on our state funded broadcasters: it’s up to us to let broadcasters know.

And for now it seems like this show won’t be broadcast here.

Progress is about leaving behind us those things that no longer reflect the kind of people we are. But if and when we make mistakes, having the humility to apologise and the courage to sort it out is what matters.

We saw this play out recently in our capital after a council-sponsored musical production of Joseph and his Amazing Technicolour Dreamcoat tried to replace “Children of Israel” with “Children of Kindness.”

The Wellington City Council apologised unreservedly to Jewish New Zealanders and they were right to do so. Erasing or replacing references to Jewish history is not new but it has no place in our country in 2017.

It’s been just over two weeks since we launched our campaign encouraging Kiwis to #GiveNothingtoRacism.

We’ve reached millions of people here and around the world and our corporate leaders are joining us, too, because they know that talking about racism is something we need to get better at.

The important thing is to be brave enough to have those awkward, difficult conversations.

It’s worth it. We’re worth it.