Tuai: A Traveller in Two Worlds 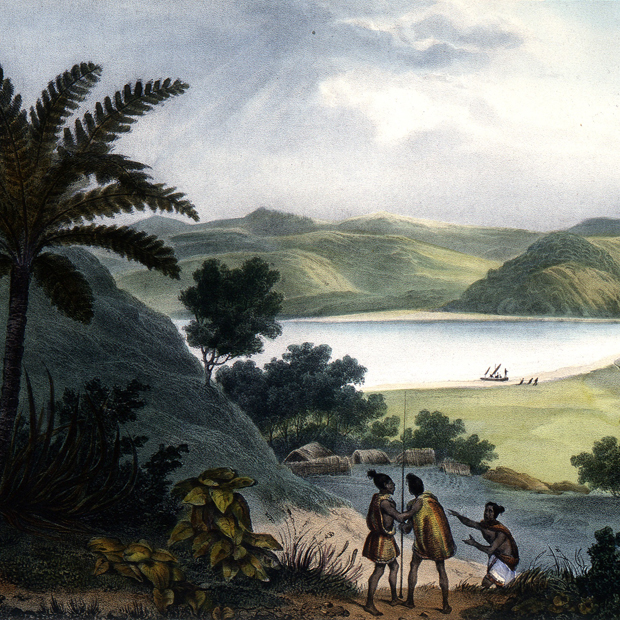 Thanks to the generosity of Bridget Williams Books, here are two excerpts from a book launched yesterday at the Kororareka Marae in the Bay of Islands. It’s about the travels of Tuai, a young Ngare Raumati chief from the Bay of Islands, and a companion, Tītere, who set off for England in 1817. They were among a number of Māori who took the chance to head beyond New Zealand shores and check out life in Australia, England and Europe in the late 18th and early 19th centuries.

The co-authors are Alison Jones and Kuni Kaa Jenkins. Alison, a Pākehā, is a professor in Te Puna Wānanga at the University of Auckland — and Kuni, from Ngāti Porou, is a professor in education at Te Whare Wānanga o Awanuiārangi.

On 3 April 1824, the Ngare Raumati people saw an unusual vessel tacking down the harbour in windy conditions. La Coquille was an armed French scientific ship, on a voyage around the world led by Louis Isidore Duperrey. The ship had arrived from Sydney.

Two Ngāpuhi men on board, Taiwhanga and his young servant Hāpai, guided the ship into the Bay of Islands. Taiwhanga had been staying with Marsden in Parramatta to learn about western horticulture and was pleased to be back: during the voyage from Australia, he enthusiastically told the ship’s officers about his country “with the help of English and Zealand words which he and we could all understand”.

Each day, he “would note down how many leagues we were from his country”. The ship’s artist, Jules-Louis Lejeune, had made a portrait of Taiwhanga in a greatcoat, wearing a grand French military officer’s hat complete with white feather plume, and showing details of his fine facial tattoo.

La Coquille came to anchor off the island of Moturua, near Pāroa. The vessel was greeted — as were all newly arriving ships — by dozens of Ngare Raumati men, women and children, some of whom, the French reported, were dressed in “dirty European clothes they may have procured from [whaling] ships”

The people were eager to explore the French ship and to trade for gunpowder and anything else that caught their interest. Large nails, ground by the sailors on a grindstone to make good chisels, were popular items.

The French officers tried in vain to stop the cheerful crowds from clambering up the sides of La Coquille from their canoes and coming on board: “They climbed up on all sides and when we pushed them back they stood still and waited until we lost patience.” Vying for the attention of Duperrey, the ship’s commander, one or two men assured him they were “nue nue rangatira”.

Dressed in formal European clothes (his previous assertion to Henry Williams was either a falsehood, or he had acquired new garments), Tuai soon came on board. His appearance astonished the French officers. His face was fully tattooed; strands of his long black hair, tied up on his head, hung down around his face; yet his manners, his speech and the way he moved all seemed to suggest an Englishman.

Jules Dumont d’Urville, the ship’s chief lieutenant, thought at first he was “an Englishman who had settled in New Zealand and had been tattooed, as sometimes happens”. Tuai introduced himself as the brother of Korokoro, and explained that he had been to England.

René Primevère Lesson, the naval surgeon on La Coquille, described Tuai as of average height and about thirty years old “as far as I can tell under the tattoo which forms a mask on his face”. Tuai was rather formal compared with his compatriots, and Lesson thought he gained authority from being able to speak English.

Tuai suggested to Duperrey that the ship be moved to a more sheltered anchorage named Tokatokahau, nearer his own pā, Kahuwera, and so the ship was hauled to that location the next day. It anchored between Kahuwera Pā on one side, and the beach — called Tangatamate (“death of men”) since the killing of French captain Marion du Fresne about fifty years earlier — on the other.

Noticing the officers unease at the dozens of people on the ship, Tuai reassured Duperrey there would be no trouble: he was in charge, and the people would provide any assistance the officers needed. Then, with his wife Hiri and their infant son, Tuai settled on board.

One of the ship’s officers wrote in his diary: “King Toui . . . arrived in his canoe and suggested that he himself should keep order on board; we agreed with pleasure and he was installed with his wife and his child in one of the Captain’s rooms.”

Tuai was gratified when a five-gun salute was ordered for him; it was a European recognition of his authority, as well as a loud message to others in the Bay that this was “his” armed ship.

For almost two weeks while the ship was in the harbour Tuai stayed on La Coquille, sleeping on board and eating with the senior officers. Duperrey was impressed with him, saying “he is deliberate, eager to learn, and never disagreeable”.

In Dumont d’Urville’s cabin, Tuai conversed in English about local politics and activities, answering the French lieutenant’s questions with, as Dumont d’Urville put it, “the greatest willingness and remarkable intelligence”.

La Coquille’s senior officers, who spoke English as well as French, had with them plenty of research material — copies of the 1820 Grammar and Vocabulary of the Language of New Zealand, John Nicholas’s Narrative of a Voyage to New Zealand, accounts of Cook’s and du Fresne’s visits to the Bay of Islands, and the Missionary Register, which included Marsden’s accounts of New Zealand — and their journal entries include information drawn from these sources.

Dumont d’Urville and Lesson in particular wanted to understand the untranslated verses in the 1820 Grammar, and they quizzed Tuai (and Thomas Kendall) closely on these. The rest of the people quickly learned the names of the officers and were allowed to walk freely around the ship during the daytime.

On rainy days when no one came out to the ship to trade, Tuai sat in Dumont d’Urville’s cabin, sometimes for hours, in animated conversation. The two men discussed Tuai’s contribution to the 1820 Grammar and Vocabulary of the Language of New Zealand, of which the officer had a copy.

Tuai had provided a number of waiata and karakia for that volume, presumably by teaching them to Kendall, who copied them down in the notes that came to form the Grammar.

Kendall had not collected this particular verse from Tuai, who said he did not know its origin. Instead, Tuai talked about the naming of his own infant son, and repeated a chant whose words he carefully pronounced so Dumont d’Urville could copy them down, as follows:

Tuai tried to help with an English translation of this karakia, while Dumont d’Urville consulted the 1820 Grammar for clues. Dumont d’Urville could not understand much of the verse and was forced to rely on Tuai’s translation, which was delivered “partly in disconnected English words, partly by signs and gestures not finding enough words to express his ideas”.

Dumont d’Urville and Tuai’s translation, which Tuai said refers to the child’s life and eventual death, was:

Let my child be baptised; like the whale may he be fierce, may he be threatening.

Let this child’s nourishment [on death] be provided by the Atoua my father [the spirit of the departed].

May he enjoy excellent health, be contented and cheerful.

May he receive sustenance when his bones are raised [prepared for final burial].

Tuai explained that, five days after birth, the child was given a name by its mother and her female relatives and friends who each dipped a branch in water and sprinkled the child’s head. A tree was then planted, he said, the symbol of the child’s life. If it grew well this was a good portent for the child.

He told Dumont d’Urville that a person’s name was sacred and “it forms part of themselves”, though it could be changed to commemorate an incident, a person, or an extraordinary feat in their lives.