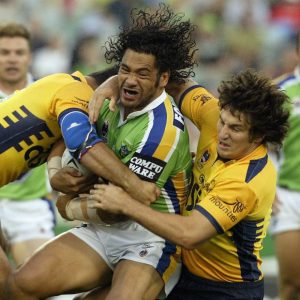 Ruben Wiki going about his business, despite the attention of Nathan Hindmarsh, for the Canberra Raiders in 2004. Photo: Mark Nolan/Getty Images

Ruben Wiki isn’t making a comeback in the NRL Nines tournament this summer. But he’s not taking it easy.

As a player, you were known for effort and toughness. Where were those seeds planted?

Where I grew-up in Otara, that was the culture. And you pick up on stuff. We used to play on the concrete. Play bullrush there.

It’s about survival when you come from South Auckland. I just wanted to do the best I could in rugby league and see what would happen. I thought I’d only play a couple of years professionally, but it ended up a bit longer.

My mentality around training was just like it was for a game. I would always apologise to my teammates pre-season. ‘If I take you out at training, I apologise now.’ They knew what they were in for when I was at training.

You played with a number of superstars over the years. Who were some of the Kiwi guys who impressed with their training attitude?

I looked up to Quentin Pongia. He was at Canberra when I was there. His toughness and approach to training was full-on, like he wanted to rip people’s heads off. I kinda followed his path, within reason.

Stephen Kearney is a good friend of mine and a professional in how he goes about his business on and off the field.

And Big Mal (Meninga). He’s not a Kiwi, but the reason I went to Canberra was the opportunity to meet him and play with him. We’re good friends now. It’s funny how things work out.

And at the Warriors now?

Nathan Friend is impressive. Thomas Leuluai is from the old school with his approach to training. And David Bhana is a new kid, but you can tell he’s hungry.

From my day, Logan Swann was a true competitor. He has been my best friend for a long time.

Can you tell us a bit about your family background and growing up?

Dad is Maori. He grew up in Mangere Bridge. His mother is Tainui and his father is Ngapuhi. Mum is Samoan. Her mother is from the village of Safutulafai. And her father is from Magiagi in Apia.

I have a younger sister, Jermaine, who used to play for the Kiwi Ferns [NZ women’s rugby league team]. My little brother is David. He was into kick boxing and gymnastics.

It was a little family of four of us – mum and three kids in South Auckland. I stayed with my grandma – Betty Cordtz – for a few years as a teenager too.

When you look at yourself now, what’s Maori and what’s Samoan?

My last name is Maori and the rest is Samoan (laughs). My dad and mum fell out of love when I was just three. Things kinda directed to mum’s side after that, so I see myself as more Samoan than Maori. But I still acknowledge both sides.

You’re the Samoan/Maori who’s linked to a Fijian drink. How did that come about?

It goes way back to the 1994 grand final, when we won the championship with the Canberra Raiders. The second day on the drink, kava was introduced to all of us – compliments of Noa Nadruku, the flying Fijian winger. I’ve kinda been hooked since. It’s been a massive part of my longevity in the game.

Kava helped me get ready for the next week. Instead of getting on the alcohol and taking me three days to recover, this one was straight recovery.

I did some research on it. It speeds up the recovery and helps with muscle soreness. It’s anti-inflammatory, helps with bumps and bruises, and rehydrates at the same time – in moderation, of course, I don’t drink it every day.

I introduced it to the Warriors and the Kiwis. Hence my nickname changing from Jake the Muss to Kava King. I like the second nickname. It suits me better.

While you were noted as a tough guy in the NRL, I understand you weren’t even the toughest in your family growing up?

When I get asked about my toughest opponent my answer is my sister in backyard footy stuff. She could hurt… ohh. She was known in her Kiwi Ferns days as The Hitman. I’d watch her play and… I’d cringe.

She was very quiet, like me, but once she’d cross that line she was just a different person.

Your wife has quite a reputation for pushing herself physically also?

Oh yeah, definitely. She has just the same drive as me. I think that’s why I was attracted to her. I met her through her brother David Apaipora, who I used to play footy with as a youngster.

Her demeanour – and coming from the army – the way she trained… I was attracted to that. And the way she goes about business. She sets high standards. She’s been doing that for our family for a long time. We’re still smiling, and that feeds off to the kids, which is great.

Santa [Ruben’s wife] is Cook Island/Maori/Chinese, so the kids connect to a fair few places.

Have the kids taken to sport?

Mackenzie is going really well in the pool. She has competed at the NZ juniors in swimming and she’s also a handy netballer and has made some tournament teams. She’s very aggressive and she fights for every ball. It’s amazing watching her. Santa has done a great job.

Denzel is a boarder at Auckland Grammar. He’s really enjoying it and has excelled at his studies.

He plays centre in rugby union for the school. I’m not fussed what game he plays, as long as he’s happy. There’s a lot of pressure being the son of an ex-footy player and I don’t want that on my son – or any of my kids.

You’ve been off the field for a few years now, but you’re still involved with the Warriors. What’s your role there?

To assist the coaching staff – and the strength and conditioning staff – with the players who’re injured. The plan is that by the time they’re back to first grade they’re ready to go. That’s my main objective – and to be a mentor to the younger guys.

What do you do outside of the Warriors?

Since I retired from playing, Santa and I have dabbled in group fitness training. We have a company called Wiki Workz Fitness. We started with four people in 2008 and now have about 100 clients. People keep coming back – husbands and wives mostly. They enjoy the atmosphere.

I’ve also been a trainer at the Ludus Magnus gym for a couple of years. It’s probably the closest thing I can get to playing rugby league in terms of intensity. I love going there for the camaraderie – plus I get to smash myself. And others.

What are your plans for the next five years?

Wiki Workz will be charging on. No doubt Santa and I will be doing something stupid. I’ll hopefully still be involved with the Warriors but, if not, then Wiki Workz will be going to another level before we hit 50.

There’s balance there – between the Warriors, Wiki Workz and Ludus Magnus – at the moment, but you’ve still got to get things right with time with the wife and the kids.

I’m still working on that time management stuff, but it’s going good and keeping me busy.