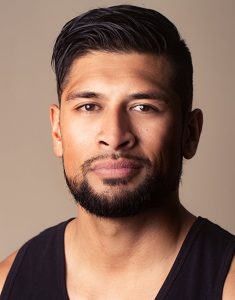 Spend a little time with Te Kohe Tuhaka and you can’t help noticing he’s a bit of a celebrity – among 6-12 year-olds anyway. That comes from the Ngāti Porou/Ngāi Tāhoe actor having been the star of Cool Kids Cooking, a Saturday morning show.

This led to a role in Marae Kai Masters, a reality show on MTS where Te Kohe played a Simon Cowell role – a judge who’s so hard-to-please that he could reduce the ringawera to tears.

He has also travelled throughout Aotearoa and overseas with theatre, most notably doing his solo performance of the John Broughton play Michael James Manaia which had reviewers applauding. I caught up with him as he stepped off the plane from the international premiere of The Dead Lands in Toronto.

It was like a New Zealand premiere on steroids. We flew in …

How was the film received in Toronto?

It was really humbling. It was the kind of film I’ve always wanted to be a part of – being able to korero in te reo, all the way through, and being able to open up a window into something that I carry with me all the time. And to have people take a genuine interest in us as a people, not us as a country, but us as a people. Was really moving for me.

I feel a lot of it (Māori culture) is taken for granted here. It’s like my attitude to Australia. Why would I ever want to go to Australia when it’s so close? And it’s the same with Māori and understanding tikanga: “Well, I live here. Eventually I’ll get around to it.” It’s like mowing the lawns. Eventually I’ll get around to it. I’ll just get someone else to do it. One day I’ll buy a lawnmower. And that’s all of us. Pākehā mai, Māori mai, aha ranei mai. That’s all of us. I think it’s part of our make-up. 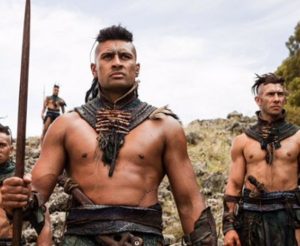 The Dead Lands shot to Number 1 place in the box office on its opening week here in Aotearoa. What do you think of the film?

It’s awesome. It’s awesome. It reminds me of every single action film I watched when I was a kid. The sound, the style, the performances. It’s the first performance of myself where I haven’t seen myself. And I was really happy with that, cause that was my main goal.

How did you achieve that?

I made conscious decisions in the way I wanted to play the character, and I went against everything that I would naturally do. I actually just tried to be Javier Bardem’s villain character in James Bond. The softness, having that evil charm but that unwavering commitment to the cause regardless. I’ll kill everyone as long as I can get there. Even if it means taking my own life, as long as, in that moment, it’s my moment of glory.

The film is completely in te reo. Toa Fraser, the director, isn’t a reo speaker. Did you have any doubts about the project along the way?

I had no doubts about the project. I was probably a little bit blinded by the opportunity. And overwhelmed. For me it was like: “Wow. An action movie”. That’s what I considered myself to be as an actor. An action hero. I wanted to be the action hero.

Do you think every guy wants that?

In the reo side of things, what gave me great confidence was my own confidence in my reo. And I wasn’t shy in awhi the others who weren’t. I was not. Cause that’s my responsibility.

The biggest thing I kept trying to remind the other actors, is that speaking the reo is no different from speaking English or any other language. Don’t feel like you have to be speaking the reo to make it sound like you’re a kaumatua who’s 80 when you’re only 16. The best way to do this is to read your line in English, then go straight to the reo.Then go back into English, and straight back to the reo. Don’t think about it. Just do it. Because, although the words that you put the emphasis on may be different, the energy you would use to speak needs to be exactly the same. So that helped them.

When I watched the film there were a few hapa,

Like, a few sour notes and they’re real subtle. So for me that’s a victory.

How did you learn your reo?

Reo is my first language. And that’s because Mum used to speak the reo with me. Mum’s of the generation that, if you spoke the reo you got the strap at kura, and she never shied away. That never deterred her from teaching us to speak. One thing I love about Mum, cause I’m starting to do it now, is when I get to the height of my anger, and I can’t express myself in English, I flip into te reo. Mum was exactly the same. I start to do it, when I get angry at my son, I just start ranting in the reo. And my sisters have started doing it, which is really funny for me because I see a lot of my Mum in them.

What was it like for you when you went to study in Wellington at drama school, Toi Whakaari?

Moving away from home, from Gizzy, into the city was a real eye opener for me. To feel the disconnect. To not have those people to converse with was real tough for me. Cause I felt like nobody got me. My English was ok but it was my attitude towards the language. I used English to be able to get things, but I didn’t recognise it as my own language.

My Māori helped me get through the degree. I had no idea what the hell Western theatre was about, but I could understand Shakespeare. I loved the language. I could connect to it. I could recognise a lot of the lyricism, the pictorial shapings of the language and the imagery. It was very similar to Māori. That helped me to understand where the craft came from, and our version of craft. That’s kapa haka, whaikorero, our arts. I could see the similarities in what I was learning at Toi.

There is a specific type of fighting style in the film that was developed by Jamus Webster, a mau rakau expert. What did you think of that?

The fighting, amazing. It’s so us. It’s so Māori. It has all the subtleties, the idiosyncrasies, the breath, the visceral feel to it that makes us say: “That’s Māori”.

How do people react to you in the film? You’re an all-round bad guy.

In Toronto you could hear people booing me in the audience: “Kill him! Kill him!” And I was sitting there laughing hard out. Yesssssssssss.

People say to me: You’re always the bad guy. Well, I give good bad guy. But I can play romantic.