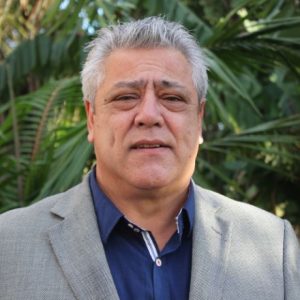 These days, Haami Piripi chairs Te Runanga o Te Rarawa in Kaitaia. But he spent some time in Wellington too as the chief executive of Te Taura Whiri I te reo Māori, the Māori Language Commission. Here he talks with Dale Husband about his efforts to become fluent in te reo Māori – and about his concerns for the future of the language.

How did your reo journey begin?

Well, I was fortunate because, not long after I was born, I was whangaied by my grandfather’s older brother. And, from the age of six months, my parents were Henry and Kate Phillips. So I grew up in a household in rural Ahipara of older people who spoke only Māori among themselves, and with their elderly friends.

That gave me a lot of exposure to the reo. And I didn’t have to rely on my own birth parents for the language which, when I was a kid, was already starting to die. I was lucky too in that we had my great grand-father, Kingi Phillips, living with us. Also, we were right next to the Roma Marae which meant that we were at every hui and tangi. So I had all that exposure.

Still, the old people didn’t seem to have any commitment to passing on the reo to the next generation. They had the view that English was the bread and butter language and that we should be proficient in that. They saw it as the only path to success. It was, to their way of thinking, the language of status.

In my view, they almost gave away their own reo. They couldn’t see the value in it. They didn’t have an answer to their question: What use could it be? When we look back now, that was an amazing attitude and one we see continuing with other Pācific and Polynesian languages.

What was the language scene at school?

Very few of the kids had the reo at school. There were some who did, like those from the Ihaka and the Wiki families of Te Kao, or the Nathans. And we all kept in touch with it through kapa haka. But Māori language speakers were few and far between. So, if you wanted to learn Māori, you had to make a real big effort – and convince your elders to invest in you. Of course, in those days, te reo Māori was also having to compete, for the first time, with TV. So here was another enticement to embrace English.

Fortunately for me I was keen on genealogy and Māori history and, in the process of pursuing those interests, I had more than the usual exposure to the language. A lot of kids didn’t have that curiosity.

But, when I left Ahipara at the age of 16 and set off for Wellington, I still couldn’t really speak Māori. I had a few phrases and terms. A bit of vocab. But I was way down towards the bottom of the language spectrum. It wasn’t until I came back home 12 years later, after I’d worked and studied in Wellington, that I made a strong conscious effort to learn the language.

After my return, for two years I went to every tangi and hui within a 50 km radius and soaked up everything I could. Listening and learning. And it was only after I’d done that sort of apprenticeship that I had the guts to stand up and start speaking.

How did you spend those Wellington years?

Well, for five years, I worked for various Government departments, mainly Social Welfare. But I realised I needed some formal study. So I enrolled at Massey University and started off with Māori 101. John Kamariera, an elder from the north, was one of the lecturers there and I found him to be a really valuable mentor, kaumatua and friend. He gave me my first real introduction to karakia and mihimihi.

However, that structured environment didn’t suit me. I prefer to learn through experience. Some of that experience came through rugby league, like when I was playing for our local team Whangatauatia and I’d always do the mihimihi and set out the protocol. It was really good practice – and it helped me grow in confidence. That’s really important because there’s a big psychological barrier stopping Māori from having the heart to speak up. You’ve got to realise that although your reo may not be anywhere near the best right now, if you give it a go, it’ll get better. That’s the way I approached it.

I imagine that, back in those days, you were one of the radicals and played a part in the protest movement.

Yes, I was very much a part of the protest movement. And, when you get into the protest issues like language and culture, and you’re working with the Waitangi Action Committee and Kawariki, there’s some pressure to use the reo. So I kept building up my language repertoire. Especially when I had mentors like Ephraim Te Paa and Sir James Henare.

Then, when I came back to Wellington as a public servant, I gave the reo a really big nudge. In those days I had more mentoring from Hohua Tutengaehe, and Akuhata Tangaere. Amster Reedy too. He had a big impact on my life. He was always encouraging me to learn more reo and use it more.

I’d been working in the public service for some time but, when I got the top job at Te Taura Whiri, I knew I had to improve my language radically. Exponentially. In that role, I couldn’t get away with just a bit of a mihi. So, for a couple of years, it was very hard work for me. But, after going on a rapid learning path, I found I could do it properly. So I’m grateful for the time I spent there.

What has been your approach with your kids? Have you encouraged them to embrace the reo?

I’ve insisted on it. With all 10 of my children. They all speak it. From my point of view, as a Māori you’re not well armed for the world if you don’t have the reo. So for my children it’s been a must. They don’t all speak it as their first language, but they can all understand it. There’s Mereraina, Tiopira, Mihiarangi, Ngahuia, Raiha, Te Kotahitanga, Kahukiwi, Hirani, Raukura, and Miria Te Uira. They’re proud of their names, proud of their language and proud of their culture.

So how is the language now placed in the wake of the efforts to protect and promote it over the last 30 or so years?

According to language revitalisation theory, we’re not going to make it. We don’t have the numbers. Or the commitment. Or the status. So, if we are to make it, we’ll have to do a lot of work. We’re not by any means out of the woods.

The odd Māori language speaker here and there is not going to cut it. It could easily fall back to being just a ceremonial language … which is not far from where it is now.

We really need to work on increasing the status of the language – and see that it’s being used in our homes and communities. Unless we do that, we’re definitely going to lose it.