Who are you, and what have you done with my son? 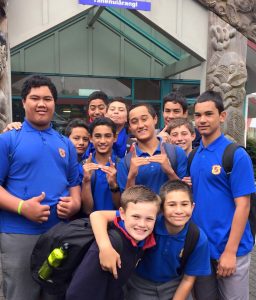 One of the most daunting things about sending our boy to boarding school was that, for the first six weeks, aside from handwritten letters, we weren’t allowed to have any contact with him. In the pre-email, pre-free calling era, this would have been fairly standard.

Back in the day, boarding school parents didn’t have much choice but to drop their kids off at the start of the term and hope for the best. An old boy of one Māori boarding school told me he has clear memories of a junior running down the long driveway in the dusty wake of his parents’ car, begging not to be left behind.

Boy, they bred parents tough back then.

Nowadays, we’re kept up to speed on the happenings at Hato Pāora College thanks to a steady stream of social media updates, Facebook photos and Twitter feeds. It’s just as well because, during those first few weeks, our boy sent precious few letters, and the ones that did make it home looked like they’d been written from a bomb shelter while under heavy fire. The first letter simply said: “I am alive.” The second, barely legible in a red scrawl, requested more undies and munchies. Urgently.

People told us that by the time Gala Day came around at the end of that six weeks, we wouldn’t recognise our boys. “They change so much,” one mum said, all teary-eyed with nostalgia. I smiled politely, but didn’t believe it for a second.

I was wrong, of course.

The first clue came in the third letter we received, just over four weeks in. It was three pages long — both sides of the paper. To put that in context, this is the kid who, before he left, could text with his eyes closed but couldn’t hold a pen for longer than a minute without being struck down with cramp.

The second clue was that he used fractions to rate his subjects, listing them in order of preference, with maths topping the list. Yeah, I had to read that twice, too. When he signed the letter off, all he requested was more pens, “because I keep running out of ink.”

His dad reckoned he’d paid someone to write it. I wondered what on earth was going on up there. It wasn’t until Gala Day that we would finally see for ourselves.

Six weeks to the day, I pulled up outside the hostel. It was 8 o’clock in the morning and there was already a large group of boys milling around on the driveway, casually trying to look like they weren’t waiting for mum. My boy wasn’t there, so a message went out for him on the old-school wireless: a series of shouts carried across the courtyard and into the wharekai at lightning speed.

Cormac didn’t show up for another half an hour. When he arrived, breathless, he apologised, telling me he didn’t think I was really there. Turns out he’d been pranked the night before — the boys had told him I’d arrived early and was waiting for him in the car park. He’d shot off into the dark night, leaving the dorm room rattling behind him with raucous laughter.

It was just one of many stories he told us that weekend, each one tinged with its own special brand of boarding-school humour. There were serious stories, too. Reading between the lines, we knew there’d been some ups and downs. And, going by his sly grin, plenty of tales we’ll no doubt never be privy to.

The changes we’d been told to expect were even more drastic than I could have imagined. He was helpful. He made his bed in the morning. Not just his own, but mine as well. He paid particular attention to the corners — because, apparently, all these years I’ve been doing it wrong. He was also respectful. Every time I called his name he would appear by my side and say: “Yes, Mum?” It was great, if not a little freakish.

The most significant change, though, was his āhua — his appearance. It wasn’t a physical thing, but an intangible quality that all the boys seemed to exhibit. A certain independence. Pride. We could feel it as they took to the stage on Gala Day to perform the school haka together for the first time.

The packed gymnasium was silent. All eyes were on the stage.

The boys drew themselves up tall, absorbing the pressure. They had been preparing for this moment for weeks. They’d practised every day after school. They’d practised for hours in a row on the weekend. Some nights they could even be heard practising in the shower. It had to be perfect.

A senior prefect had told the boys the origins of their haka — how, in 1984, the boys had complained that they didn’t have their own school haka like Te Aute and Tipene. Te Aute’s haka is legendary. It pays tribute to its founders and famous former students, including Apirana Ngata, Maui Pomare and Te Rangi Hīroa.

“We wanted a haka like that,” recalls Te Atawhai Tibble, who was at Hato Pāora from 1980–1985. Fortunately, Hato Pāora had something nobody else had: Morv Simon. Morv, head boy in 1963, had returned to Hato Pāora as a teacher, and had already composed many of the waiata the school is now best known for. They had a sound that even their rivals had to concede was unique. “If there was one thing we always knew about HP,” says a Te Aute old boy, Kura Moeahu, “it was, boy, they could sing.”

In composing the haka, Morv had help from Conrad Kiina Noema, a senior pupil at the time. Ka Whaia Rā was written, so the korero goes, on the standard issue marae paper that’s normally used to dress the tables. The words remember the school’s founding fathers and their dreams and visions. The names and spirits of Fathers Gupwell and Delaney are called upon.

These days, only the final verse of the haka is performed. Every year, the new boys spend the first six weeks learning it and then perform it for whānau on Gala weekend. It’s a tradition that passes on the whakapapa of the haka and paves the way for their years ahead.

It was fitting then that, after the new boys had finished, the old boys took the stage and it was performed again. It was the same, but different. An old boy told me that, over time, the school has developed a new sound. The words to the waiata are the same, but the structure of the harmonies is different. “Things change, I guess.”

Change, of course, isn’t always a bad thing. In the last decade or so the culture at Māori boarding schools has come under intense scrutiny. When we first started researching Māori boarding schools, some people thought we’d lost it. A quick Google search on the subject returns dozens of headlines that would give any parent pause for thought.

Luckily, a timely article by Moana Maniapoto helped to put a context around the troubles. Not to romanticise what life at boarding school is like, but to be able to put our trust in the leadership that certain things have changed.

When it was time to take Cormac back to school after his weekend on home leave, I asked him to take his bags out to the car. He did as he was asked, quickly and without complaint. As I started the car, marvelling at this new boy of mine, I reversed over his bags — which he’d put right behind the wheels. “Oh, sorry,” he said. “Did you want me to actually put them in the car?”

Then again. Some things never change.