Turning a life around 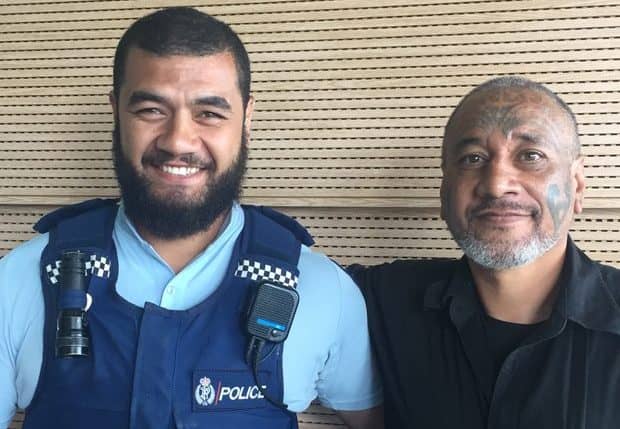 Inside the Counties Manukau Police Station in Auckland, a small group has gathered for a graduation ceremony. At the front sits the District Commander and several men and women in sharply tailored suits. Uniformed officers and whānau fill the rows behind.

Henare Emery, 47, has been waiting for this day since he was released from prison a few months ago. He’s had a while to think about things. He has spent more than four years of his life in jail, on and off — six months here, nine months there. He never planned it that way. Sometimes things just spiralled. When a cop car turned up, blue and red lights punching holes in the night, he never knew how long he’d be gone.

When he was away, he always thought about his kids. His daughters: Renee, Cherish, Forever and Passion. The two eldest were born when he was still a teenager. He thought about his mokopuna, too. The last time they came to visit him inside, he knew he had to make a change. Prison is no place for tamariki to visit their koro.

So when Henare heard about a programme that might be able to help him get out and stay out, he thought it was worth a shot.

The programme is Kotahitanga, which means working together. It’s aimed at people like Henare. People whose offending is at the lower end of the scale, yet serious enough to warrant a prison sentence. People who continually tread a path back to prison.

The idea with Kotahitanga was to hook Henare up with a police officer who could be his mentor, his kaimanaaki, while he was still inside. Someone he could turn to once he was on the outside. Someone to support him through the ups and downs — and to help with practical things, like filling out forms and finding a job.

First, though, Henare was encouraged to set a few goals. That led to him doing some courses. He learned it was a good idea to deal with a problem when his frustration level was at 3 or 4, rather than waiting until it got to 10. Sometimes it was as simple as going for a walk to cool off.

Through Kotahitanga, he started to relearn his reo. His dad had spoken to him in Māori growing up, but he’d forgotten it all.

He also learned about wellbeing: whānau ora. He learned that health isn’t just a physical thing, but spiritual and emotional, too. That it’s a balance between our wairua (spirit), hinengaro (mind), tinana (body) and whānau (family). It made him think about putting things right, and owning up to his mistakes.

Once released, Henare had to agree to stay in regular contact with his kaimanaaki, Matt Pualau, a young constable. He was given a mobile phone, so there wouldn’t be any excuses. A few of the guys inside warned Henare not to take it: “Bro, those phones are bugged.”  When he first got it, he was careful not to swear, just in case. But that didn’t last long. He knows now that no one’s out to get him.

Henare and Matt get on well. Matt is Tongan-Samoan and only 26, nearly half Henare’s age. But that’s never been an issue. Matt’s always had a strong role model in his life (his dad), so he had a good example to follow when thinking about what it meant to be a mentor.

Matt says he’s come to see a different side of Henare since they’ve started working together. “I know by the way he looks, people might not see it, but as the saying goes, you can’t judge a book by its cover.”

Henare used to tell his girls that cops were the bad guys. Now, when Matt’s car pulls up outside, the neighbours are likely to yell: “Hey Henare, your mate’s here!”

At the graduation, when Henare’s name is called out, he hesitates for a second. Then he stands and slowly makes his way to the front. He’s short, thinning on top, but smartly dressed in a black shirt and jeans. His face bears the moko of his two iwi, Ngāpuhi and Te Arawa.

He’s presented with his certificate by Nga Wati Chaplow, an inspector at Counties Manukau Police and one of the leaders of Kotahitanga. They hongi.

Then Wati steps back. The District Commander, the men and women in suits, the officers in uniform, all wait. The floor belongs to Henare.

He looks down, feels the weight of the certificate in his hands. He smiles: “I have to say, it felt quite strange to come in here today through the front door instead of the back.”

Everyone laughs. For someone who’s never seen himself as a public speaker, Henare’s doing pretty well. When he was a kid, all he wanted to be was a gangster. His dad was violent. Both his parents were big drinkers. He was number two of 15 children, and often left to look after the younger kids.

By the time he was nine he was a ward of the state, shipped around the country for most of his childhood to different foster families. The whakapapa tattoos on his forehead are covering the one he got when he was 14 — the name of his girlfriend at the time.

In his speech, Henare thanks the people who’ve supported him in the past year. His whānau and friends. Eve Hay from Serco who introduced him to the programme while he was inside. And Matt, for helping him stay on track.

He talks about his daughters and eight mokopuna and how he wants to be a good influence in their lives. Just last week he was at the police station speaking up on behalf of his son-in-law who’d breached his bail conditions. He’d told the officer in charge of the case that he could help the 23-year-old stay on the straight and narrow.

He also has a word of advice for some of the younger guys graduating with him. “For the past 40-odd years I’ve been in trouble, on the wrong side of the law. It’s taken me that long to find myself. Kia kaha. Do good things, and good things will come back to you.”

This is the kind of change that police and iwi leaders have been talking about for a long time. Change that doesn’t just affect one person’s life but ripples out and has a positive effect on the lives of many.

Too often, statistics reinforce the idea that Māori and crime go hand in hand. A few years ago, iwi leaders put their heads together and came up with a plan to turn those statistics around. Working with Police, they came up with a new strategy, Turning the Tide, which gave Police a mandate to think outside the square. That’s where Kotahitanga comes in.

As Wati explains: “The notion of an offender working in partnership with a Police officer is completely foreign to these guys. It’s foreign to us, too. It’s going into prison and saying: ‘Hello. This is who I am. I want to help you when you come out.’ ”

It’s not meant to replace old-fashioned policing. “The welfare of victims is always our priority. But part of that equation is preventing further victims. That means looking to the future with a belief that people can turn their lives around. We acknowledge people’s mistakes, but they are not defined by them.”

Henare is one of 180 to graduate from Kotahitanga since it began in 2014. It’s the first time Police and Serco have come together to work in partnership like this, and everybody wants to know if it’s been a success, if Kotahitanga is helping to turn the tide.

So far, only 16 people have reoffended. At a cost of $300 a day to keep an offender in prison, it’s possible to put a dollar figure on the savings to the taxpayer.

But the real success has a value that can’t be measured with numbers or dollar signs or graphs. It can be seen on days like this, when graduates from the programme step up to take the floor.

“Here I am,” Henare says, holding up his certificate. “I’m proof that it’s never too late to change.”