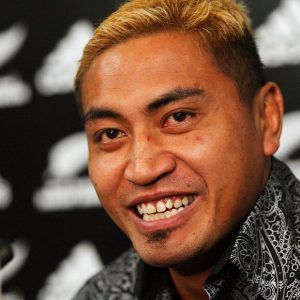 The rugby world knew him as a hard man — as one of the toughest and most intimidating loose forwards ever to play test footy. And, in 48 matches for the All Blacks, Jerry Collins established and built on that reputation. But, naturally, he was much, much more than just an on-field bruiser. He was also a highly intelligent, amusing, irreverent, soft-hearted and generous character. And he struck a chord with people from all walks of life.

The Porirua road sign said a lot about the status of the man that P town was farewelling last week. It read:

His home-town community and a host of other admirers were saying goodbye to Jerry after a road crash in France killed him and his partner, Alana, and also seriously injured their baby daughter, Ayla.

There were official tributes and a host of others from family, friends, and team-mates. His younger sister, Helen, simply referred to him as a “young buck” and encouraged the crowd not to be sad.

He was “mentally tough, physically intimidating,” said the New Zealand Rugby Union rep.  “A soldier who bled,” said one of his rugby mates. Then there were his Sunday-school teacher, his manager, his Canadian in-laws and his Samoan family.

The send-off at Te Rauparaha Arena was just one of many Porirua tributes to a 34-year-old son who put the town on the international map and who prompted endless stories about him doing things his way. Like taking off down the road to play games for his beloved Norths club when, as an All Black, he was meant to be following the official line – safeguarding his body and resting. Or making other uses of his official rest time by working on the rubbish trucks and playing rugby league for Wainuiomata.

The crowd of several thousand heard there were many parts to JC, the rugby hard-man, with his combo of big hits and signature smile. His three sisters, however, considered him a mummy’s boy because it was their mother who always carried his number one clothes to his games for him to change into later. This carried on while he represented Wellington in the NPC, the Hurricanes in Super Rugby and the All Blacks.

His church pastor had hoped, when Jerry was a young boy, that he might go into the ministry. But the tipu aiga or whakapapa of his family had prepared him for another road founded on the principles of family, church, and community.

Ma’a Nonu, an All Black and Hurricanes team-mate, recalled his own school-days at Rongotai College and his first sight of the 14-year-old Collins in the St Pat’s school 1st XV. “That day he crushed everyone in sight,” he said.

Later, after Ma’a made the All Blacks, he remembered Jerry coming up to the newbies who were so nervous and staunch they just nodded to his greetings. Jerry (mock indignant) would say: “Don’t you guys speak English?”

Other All Blacks mentioned the “on-tour” Jerry Collins who liked a cigarette and a beer with the locals. To his teammates, he was fiercely loyal but he also liked his space. Tana Umaga was Jerry’s cousin as well as his All Black captain. And he recalled that some team-mates and coaches found him off-putting and would complain to Tana.

They’d say: “Jerry’s being mean to me.” Or: “He’s not wearing the right clothes.” (Which was a reference to Jerry preferring a tee shirt and lavalava to the sponsors’ clothing.)

Tana would say: “Go and tell him yourself.” But then he’d catch up with Jerry and ask him to go easy on them.

Another team-mate, Conrad Smith, spoke of treasuring a sort of compliment from Jerry, who’d once told him he was the “toughest skinny white guy he’d ever seen.” Conrad, who referred to JC as “tough and complex”, said he wanted to dedicate the Hurricanes Super Rugby season to him.

Jerry’s manager, Tim Castle spoke of their first meeting when his lawyer skills were needed to handle “high tackle” charges against Jerry. It was in preparation for the judiciary that he got the glimpses of the cool head and humour of the man. That partnership endured and was to have secured a two-year deal for Jerry with another club in France when the accident occurred. He said: “To Jerry, anything and everything was worth a shot.”

That two-year contract was referred to by Tana Umaga as “another chance to live the dream.”

The public poroporoaki was a brave act for the Collins family. It brought together most of the strands from Jerry’s life and it linked Porirua’s Polynesian and Palagi communities. Ron Wood from Norths, the Porirua Mayor Nick Leggett, and Jerry’s manager probably spoke for most Palagi when they recounted how they felt much better for being exposed to a browner side of Aotearoa through knowing Jerry.

The tenor of the three-hour tribute may have caused some soul-searching for Jerry’s uncle, Father Lu Collins. He said that regular church-goers usually had poor turn-outs for their funerals, but the response to Jerry’s death showed pub attendance was no hindrance to enduring mateship.

And, after all the local testimony to the width and breadth of the life of Jerry Collins, a fitting poroporoaki came from the prayer of his Sunday-school pastor. It was simply: “Grant him space.”