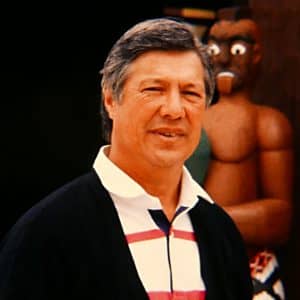 Pā Tate outside Tamatea in 1990

Pā Henare Arekatera Tate died on April 1 at Rawene, on the shores of the Hokianga Harbour, the wellspring of the world of light.

Kennedy Warne recalls the impact the priest and theologian had on him.

When I met Pā Henare Tate in 1990 at his home marae, Motuti, on the north side of Hokianga Harbour, he told me a story about mullet.

I was editor of New Zealand Geographic magazine, then only a year old. The 150th anniversary of the signing of Te Tiriti was coming up, and I decided to devote an entire issue of the magazine to te ao Māori. I felt it was important to include something about the unseen realm of wairua and tapu. I was told that the man I needed to see was Pā Tate. So I went to Hokianga to find him.

There was a tangi happening, the first I had ever attended. The thing that sticks most vividly in my memory is that what the speakers were saying in the house, Tamatea, seemed to be rising like a subterranean force from the land beneath. It seemed to be coming through the floorboards, up through the feet of the speakers, through their bodies and on to their tongues. For someone wanting to learn about the unseen world, it was like jumping in the deep end — a baptism by immersion.

Afterwards, I sat down with Pā Tate and he told me this story …

They rang me at quarter to five on the morning the old man [Sir James Henare] died.

Afterwards I sat for a while thinking about the old man. Then I rang a friend at Mitimiti.

“Harold, I can see the mullet jumping in the waves,” I said.

“No, Father, no mullet. The fishing’s bad at the moment.”

“But Harold, I want some mullet to take to the old man’s tangi. A koha from our people.”

“Well, Father, if you want me to go out, I will. But I don’t think there’ll be any fish for the tangi.”

Harold rang back later that morning. He had ten dozen mullet.

I say that was the old man’s mana.

Pā talked to me about the principles he cherished — of tika (justice), pono (integrity), and aroha. He spoke about his great sorrow that the language was being lost, for without te reo, tapu is stifled, without te reo, karakia are impotent. And he spoke about relationship with the land. He spoke, and I wrote his words down and published them, and today, re-reading that short article more than a quarter of a century later, his words seem as fresh and vital as they were when I first heard them.

In 2009, almost 20 years after that first meeting, I paddled around Hokianga Harbour in a kayak for a story about this harbour of history, this harbour of dreams, this “wellspring of the world of light.”

On a rising tide I paddled up the Motuti River, which twists and turns like an eel through the mangroves all the way to Motuti marae. I was hoping Pā would be there. He had recently retired as vicar of Auckland and returned to Motuti to be with his people and land and to pass on his cultural knowledge to the young.

As luck would have it, not only was Pā there, but most of the community as well. I had showed up during the marae’s annual meeting, and lunch was about to be served. I sat down next to Pā with a plate loaded high with boil-up, and he spoke about the necessity of converting knowledge into conviction and conviction into action. Getting knowledge from the head into the heart, and then to working hands and walking feet.

He pointed to a young man with an elaborate moko tattooed on his shoulder. “He needs to shift that here,” he said, tapping his chest. “Then he’ll have something of real value. On the arm, not so useful. There it’s only skin deep.”

Like his great-aunt Whina Cooper, “Te Whaea o te Motu,” Pā knew that connection to land was the secret to establishing identity. He liked to quote a waiata that expresses this truth: “Hokianga, call your children together. They are the descendants and remnants of their ancestors, scattered to the four winds. Tell them who they are.”

Pa’s connection to whenua was profound. He could walk landscapes and they would come to life through his stories and namings, and the land in turn would impart life to the walkers. “Ko te ko te whenua hei whakamana i te tangata” — whenua empowers tangata — he wrote in his dissertation for Doctor of Philosophy, which he received in 2010 from the Melbourne College of Divinity.

The mana within the whenua creates the mana of the whenua, he wrote. There are no shortcuts to acquiring the agency of mana. Begin with the unseen world — that was Pā’s message.

Like Kupe, Pā Tate has farewelled the world of light.