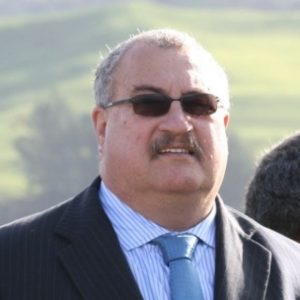 Erima Henare at the Takapuna Urupa

E rima ra mo Erima. Early in May came the word that Erima Henare, aged 62, had died in Wellington. And, following on from that unsettling news, came the tributes in which Erima was extolled and mourned for a host of virtues and achievements, especially for his work as a reo Maori advocate. But the compliments also related to his contributions as a Ngati Hine leader and as a powerful, articulate, good-humoured influence among the powerbrokers in politics, Maori rights, Treaty issues, education, and the arts – not to mention his role within the Henare whanau who have commanded so much respect within and beyond their northern base.

Right from the get-go, the tangi for Johnson Erima Henare wasn’t going to follow the playbook. Any game plan for what was to unfold hadn’t been used since his father (the revered Sir James Clendon Tau Henare) passed away 26 years before.

Most of those who were on the field of play then had also shuffled off this mortal coil. These, in fact, were the playing conditions that Erima had been groomed to handle. By the time the tremors of a falling kauri had shaken the island “from the head to the tail of the fish”, it was a sure bet that, before he was laid to rest, the pulling power of Erima would test the mettle of those he left behind.

His son, Peeni, midst his own grief, had to deal with a King’s request for Erima to lie in state at Tūrangawaewae marae – as well as handle the daunting task of preparing his father for the long journey home. The only advice he got was to focus on bringing his dad back and to let the rest of the world fall into line. During the next five days, the world who knew Erima did just that. And, for his part, Erima became the silent choreographer of his own version of “here we go around the Māori bush”.

It took more than 24 hours to make it home from Wellington. Paying homage to the King by pausing at Te Puea Marae. Also, making a detour to Henderson to fit a new overcoat suitable for a man of his stature.

This gave us all time to consider the prospect of a midnight blockade on Maromāku hill by his Ngati Te Tārawa rellies who were miffed that he was by-passing his place of birth at Mōtatau. A stop at his home at Kauri, however, resolved the threat of a siege and Erima was allowed to follow his father’s footsteps to Ōtiria.

But what we dodged at midnight wouldn’t save us from the whipping we were due when we arrived at Ōtiria just after 4am. The karanga and haka that pierced the early morning mist was set to rend the hearts and minds of Ngati Hine already in a state of shock at their sudden loss. The verbal beating for our tardy arrival was reserved for the biggest target they could find – and, in this case, that was me. A grinning Erima might have smiled and said: “Better you than me Uncle.”

In Ngati Hine we’re used to the newly departed writing their own playbook and, as it turned out, Erima was no exception. The details aren’t necessary here but trusting the tikanga that tangihanga have evolved is essential. To cover these occurrences in the North we follow two simple axioms: One is that “You never make plans on the road.” And the other? “While you’re alive, you get to buckle your own belt. When you’re dead, that privilege goes to the living.”

Grumpiness aside, the house had two hours to resolve the issues about the journey’s end and burial for Erima. By the time the mist lifted and the first manuhiri arrived, the game plan was set. Surprisingly, how it would play out came from the players at the “back of the house”. When several offers were made to bring the Army in to help prepare meals for the expected hordes, they were politely turned down with a “we’ll manage”.

And, even though it didn’t look like it at times, those of us in the “front of the house” team took that mantle on board and readied ourselves to take on the job ahead of us, come what may. Day Two had begun in earnest.

A slow trickle of manuhiri soon grew into a torrent and by lunchtime, it was a flood. Both sides of the house were stacked with people, mourners shoulder to shoulder down the centre aisle. Tūmatauenga is easily the biggest meeting house in Ngati Hine, but for five hours we couldn’t see the casket from the doorway.

During that time, we greeted and listened as homage was paid to the man, his work and his capacity to be at ease with powerbrokers, as well as to speak with eloquence on behalf of those who sought his counsel.

On matters Māori or in Māori, he had few peers. That was part heritage but a great deal hard-earned too. Was he flawless? No. He wasn’t. But you needed to be at the tangi and wide awake to hear all about that.

Day Three and the weekend brought a tactical game change and a break with tradition when we realised it was easier to move one man out, than to squeeze a thousand people into the wharenui.

Erima obliged with a balmy summer’s day to welcome winter. But some traditions can’t be easily set aside. So we were doing the Ngāti Hine “bunny hop” again. Manuhiri streamed on, speakers on either side doing the stand up, sit down, stand up again, shuffle along, quick step, which had the tide of people flowing through and avoiding hours of standing at the gateway, watching and hearing everything but still bound to wait your turn.

The Māori King and his robust crew of raconteurs led the way, followed by wave after wave of representatives from every quarter of the compass. Once they got the rhythm right, it caught on. So much so that Mauriora Kīngi, for instance, declared he might just take this new dance craze back to Te Arawa.

(Fate got in the way, though, and Mauriora didn’t get to work it into his own game plan when he himself passed away two weeks later.)

The night drifted into Ngati Hine time as Day Three closed in. Day Four and we were back in the house with Parliamentary heavyweights of differing hue in attendance. The judiciary, without their finery, turned out and so too did the Iwi leaders, with an eye for the main chance at grabbing any opportunity to poke the borax. A rowdy debate ensued as to whether the Leader of the Opposition should be addressed as Ānaru Paku or Nohinohi. And, before it was over, Andrew Iti got a two-hoe salute.

While we managed to keep a separation between the legislative and judicial powers in the house, Erima had a special challenge still waiting for us in the shape of the third cog in the wheel – which was the Church. That little riddle would have to wait for journey’s end at Mōtatau where Erima’s father’s footsteps took us at the end of Day Four.

It was in his house of Manukorokī that the last few plays of the book were written. Erima would be laid to rest next to his mother and father. He had made it known that he would prefer not to have a Christian service. Well, in the citadel of Anglicanism that is Mōtatau, that option didn’t have a snowball’s chance in Hades.

The less reverent mused that, if Erima was right, what we planned wouldn’t matter but, on the off chance he was wrong, he would need all the help we could muster.

The resolution? His service would be an ecumenical celebration and, in respect to his family, it was agreed that English would not be spoken during the last homilies to the man who used to sign off his communications with a simple “e”.

No surprise then that one, whose feminine wiles mirrored Erima’s own witticism to charm birds from the trees, would reject this final request. Like all tellers of tales at a tangi, even a Minister of Education might gild the lily to favour her own recollection of events. That aside, I think Erima would have enjoyed the fact that, when we closed the playbook, nothing had followed the script and everything had worked out as it should have.

Before I close the book on these five days for Erima, a last word in respect of his family: his sisters and brother, his children, his mokopuna, the lifetime loves of his life and Debbie with whom he shared the final pages of this story, from all of us who witnessed and shared the quiet dignity of your grief and loss … we offer solace when it is needed and support when it’s called for.

As with his father before him, many speakers referred to how much poorer Ngati Hine would be for his passing. I would like to think that Ngati Hine is that much richer because Erima lived.