A scientific appraisal: “The first time I saw Jonah” 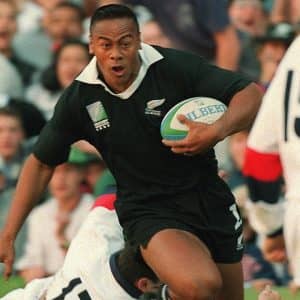 Jonah Lomu at the Rugby World Cup in 1995

I’ll always remember the first time I saw Jonah Lomu. Wesley College were arriving. It was 1992, and I had heard his name repeatedly from members of the 1st XV, the 2nd XV and even the legendary 3rd XV. Well, just about everyone at Te Aute College had heard the name Jonah Lomu. Pffft — I thought. We’ll see.

Brave words indeed from someone whose highest hopes would be sitting on the bench for the 2nd XV, if three flankers got injured.

So there we were — lined up on the hallowed turf of our marae ready to pull the meanest haka ever, in the pōhiri, to scare the bejeezus out of this bloke called Jonah. Our minister, Anaru Takurua, had revved us right up. Even Anaru had heard of Jonah Lomu.

Then, they appeared. Wearing the black and white-striped number one uniforms, the Wesley College contingent made their way up the path as we delivered the most passionate rendition of “Utaina” that I could remember. All the time, we were looking: “Where’s Jonah?” All I could see was a group of boys who looked like us, with … hang on … a totara tree in their midst. A totara tree dressed in Wesley’s number one uniform. I assumed they were delivering it as a koha. How ridiculous, I thought. What an anticlimax.

Then I saw that the totara tree had grown what, from a distance, looked like kauri stumps. But, on closer inspection, I could see that, horrifyingly, they had become legs. And I realised that what I had initially misconstrued as rimu branches in a Wesley reefer jacket were, in fact, arms. And what had seemed to be Moeraki boulders became shoulders.

This was the point in our haka when I was supposed to be supplying a ferocious “Hi”. But all I could muster was an incredulous “What the … ?” And the contribution from my best mate standing beside me was “Holy crap!”

Karakia, conducted by Anaru, was next on the programme. I couldn’t decipher whether Anaru was conducting karakia with a pūkana to intimidate Wesley, or whether this was simply his natural reaction to laying his eyes on the Rock of Gibraltar in human form.

When the ritual of encounter came to a close, we had to hongi our guests. I called for a ladder. Jonah, however, graciously stooped what must have felt like 20 feet to facilitate our greeting. Immediately after, the stories about him spread around Te Aute. How Jonah could sprint 100 metres in 11 seconds. Or how he held just about every athletic record at Wesley. Or how he could cut his scissors by using his own hair.

Two things came to my mind as the 1st XV encounter loomed. One was: Thank God I’m too useless to make the 1st XV. And the other was: How the hell can our guys stop him?

One of our flankers came up with a plan. It sounded a little risky, but we admired it for its bravery. “I’m gonna run ten to the dozen,” he said, “and take him out when he’s in the air at the kick-off.”

And so he did. Ten seconds after our man implemented the plan — to rapturous applause, I might add — Jonah still had the ball, had miraculously found his feet, and was venturing forth again on an ominous offensive foray into Te Aute territory.

Meanwhile, our brave hero was on his way towards me on the sideline, holding his shoulder and seeking the services of the school nurse and the St John’s medics. He’d broken his collarbone.

Later, Jonah attacked the core of our backline, running straight into our centre. That was Billy Weepu, who was on his way to becoming a Junior Kiwi and an NRL prop. And he wasn’t known to shrink in the face of adversity. So Billy met Jonah. And vice versa. There was a violent collision. And the unimaginable happened. Billy picked Jonah up and pile-drove him back in to the revered Te Aute number one pitch.

Jonah was shocked. So was Billy. Wesley were stupefied. And we almost exploded. And, against all expectations, Te Aute went on to win the game. Then there was one final, unforgettable moment. At the end of the match, Jonah went straight up to Billy and shook his hand. Then he removed his jersey and lined up with his team to do their haka. But that was no contest. Let’s just say that we won on the scoreboard, but Jonah won the haka — six abdominals to one.

What comes to mind is the Latin line. Non est ei similis. It summed up Jonah very nicely. There was no one like him.

You will, I hope, excuse me (and countless others) for being a little enamoured of the man. So many times did we see him — effortlessly it often seemed — cut a swathe through opposing rugby teams. Schoolboys. Sevens. Provincial. International. It was all the same to him. 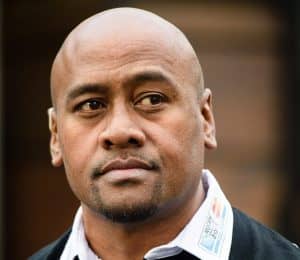 I barely knew him at a personal level. So I don’t have any special reason to be writing this, other than being awed right from that first sight of him at Te Aute back in 1992. And there are many others — teammates (opponents too), and writers and colleagues and family and friends — who knew Jonah well enough to explain why we should be honouring him and mourning his passing.

I can only allude to some memorable moments. Like how I felt seeing Jonah rule the world at the Rugby World Cup in 1995, and how elated my pāpā and I felt. We debated whether we were watching someone better than Nau “The Horse” Cherrington, one of our Northland heroes from the 1940s and ’50s. We even argued that Jonah may have exceeded the man most Ngāpuhi say was the greatest back the game had ever seen: the fabled Johnny (JB) Smith, who was also from that era.

I can only tell you how it felt commentating test matches Jonah played in. How any professionalism I had was thrown out the door when the big man got the ball in his mitts and, like a hurricane, (there I go again) left defenders in his wake, strewn over the field, and perhaps wondering how they might devise a different plan to bring him down next time he ran at them.

I can only confess how my commentating mate, Ken Eruera, and I, did lack a certain amount of balance and objectivity as we spurred Jonah on to the winning try for the Wellington Lions against Canterbury, at Jade Stadium, to win the NPC in 2000.

And I can only refer to the mixture of pride and embarrassment I felt one day in Wellington when I was struggling up Mt Victoria on a run (jog? crawl?) and Jonah drove past me. He pulled up, wound down the window, grinned his lovely grin, and said: “Kia kaha bro.” Maybe it was in jest. Maybe genuine encouragement. But, either way, coming from Jonah, it was special.

It’s beyond me though, to spell out how it feels to have someone like him taken so soon. Someone we adored and admired. As a fellow “quadragenarian”, it still seems beyond belief that Jonah is gone. And, as we grieve as a nation, and as the world sporting community grieves with us, none of us can comprehend the grief that Jonah’s whānau, and in particular his wife and tamariki, must be experiencing right now.

So, as we bid farewell to Jonah, let’s not wonder about the rugby feats he may have achieved, had he not had such bad health. Let’s just remember the joy and awe we felt, when we saw Jonah play, or when we met Jonah in person. And let’s remember the concern we’ve had for years as he’s battled with his debilitating illness.

As I mentioned earlier, there’s that Latin saying. Non est ei similis. There was no one like him.