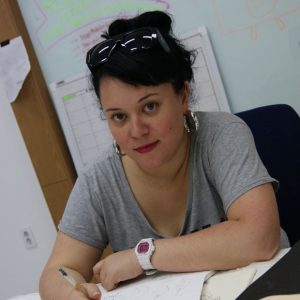 I worked in a call centre when I was 21 and sat on the side of the office that was almost exclusively Samoan staff. Someone had recognised my surname and I was swiftly plugged into the friendly Pacific matrix. Everyone was my new cousin, buying me chocolate bars and bringing me mix CDs in between the theatre of head-set work.

My mother is Māori. She is Ngāpuhi from Utakura/Kaikohe. My father is German and Samoan. For those who don’t know about the German-Samoan cocktail, I can’t give you a full-blown history lesson of Samoa right now, but long story short: Germans governed Samoa between 1900–1914, and I am a European-Samoan hybrid result from that time.

You will hear many German names scattered throughout the Samoan community and see pockets of Caucasian Pacific Island families of which the Hansells are one. New Zealand governed Samoa after the Germans, until Samoa gained independence in 1962. My Samoan side historically reads like a mechanical bull-ride that I’m still learning to understand. For instance, just before my grandfather passed away last year, he found out we had significant Russian lineage. These heritage cliff-hangers never end.

My siblings and I have, of course, become familiar with the consequences of our membership of multiple cultures. Many a taxi driver has checked out my ethnicity – and only two, both Samoans, have guessed correctly. Britain’s colonisation of Māori land is well traversed territory for me in conversation but, lately, people have been asking me: “How do your Māori and Samoan sides interact? That must be interesting.”

My parents both have many siblings and, through some miracle, both sides get along. We are talking “Is that uncle Samoan or Māori” levels when I was growing up. I am very lucky. We have hangi and umu foods given equal billing in the pit and I know both sides of my family equally.

Assimilation is a big narrative of my family on both sides, which probably helps. My mother was part of the urban migration of Northland Māori moving to South Auckland when she was a child in the 1960s. Like many migrants, my German-Samoan grandparents urged their children to adapt to the Pākeha way of life when they settled in Grey Lynn. So a Pākeha influence permeates, and perhaps helps to unite both sides of a very culturally confusing family.

That is our story though. It’s not the story of others. There is no typical “Māori Samoan experience” aside from the fact that we’re often presumed to be South Pacific experts.

One afternoon at the call centre, one of my co-workers found out I was Māori, and suddenly everyone started stand-up comedy routines that I still laugh about years later. I recall them asking me what I was doing for the weekend and before I could answer, I was surrounded by a quartet all singing me the entire Once Were Warriors soundtrack. I know I shouldn’t have laughed but the Samoan side of me had to. When they started saying I was probably drunk and they were surprised I wore shoes to work … well, the laughs sort of dried up for me.

I remember being at a staff party and a Māori co-worker came up to me.

“Why do you sit on the other side of the office with all the Coconuts? They all look pretty shady.”

For someone who preached the importance of whakapapa and decolonisation, I was blown away by her irony. Pākeha racism I knew like my phone number, but these contradictory attitudes were something I’d never really encountered.

Sophie Wilson is Ngāpuhi, Te Whakatohea and Ngai Tahu, with a Samoan-German father too. She tells the story of how she was raised by her Samoan family in Mangere until she was five, while her mother was in psychiatric care. When her mother came out of hospital, her Māori family came to collect her from up north in an uncle’s army truck.

“They literally swooped me from the front yard on Mayflower Crescent. Both sides laugh about it today. But every now and then, I still hear jokey racial slurs about Māori and Samoans from both sides. And I can still hear my nana drilling into me as a kid: ‘Your blood is 99 per cent Samoan. Okay? One per cent is German.’”

Despite this staunch persuasion, Sophie says she is a very “Maori heavy” Samāori.

“My dad rejected his Samoan culture because of all the “voodoo” and debt that his mum was getting into from fa’alavelave and donations to the church. He saw huge hypocrisy in the lack of morals in the spiritual spaces of Samoa.”

Ariana also tells a story about the complications from multiple cultures. She has a Ngāpuhi and Te Āti Haunui-a-Pāpārangi mother and a Samoan father. She grew up in Wellington in what she describes as essentially a Palagi household.

“I’m Samoan, Maori and Palagi. I grew up in a white-middle class church, I’m brown but don’t know the language. My family is small, I don’t have 500 cousins living down the street from me. In a Palagi world, I’m Samoan. In a Samoan world, I’m Palagi.”

Ariana says she knows very little about her Māori family but wants to learn more. “I definitely feel connected spiritually though. I remember the first time I went to Whanganui. I felt like it was home. There was something strangely familiar about it to me.”

Sophie also feels a somewhat instinctive familiarity. “Being Samoan is great. It’s a no brainer. We’re good looking, we love to party, we know how to look after each other, we have a unique dignity, sexuality, spirituality … I’ve never experienced the heat in Samoa, but I’d like to think I carry it with me wherever I go.”

And, as she gets older, her love for Maoridom, which she grew up feeling was “the ultimate”, only deepens.

Jeremy Sauvao’s father was raised in Porirua in the 1960s, the son of Samoan migrant parents. Jeremy’s mother’s family is Māori and Pākeha, originally from the Ngati Whatua town of Ruawai. Jeremy treasures this duality, both within his upbringing and daily life.

“I think heritage is a very sacred thing to most Polynesian cultures. So, for me, it’s really cool to have been raised in a world where I got to peep into two very different and yet very similar cultures. I feel very honoured to have tupuna who are indigenous to Aotearoa and I’m equally honoured to have grandparents who migrated from a tiny Pacific island leaving their homes and family in hopes of better opportunities for their family. A lot of sacrifices have been made on many fronts for me to even be in existence let alone being born into such an exclusive mix of ethnicity.”

Jeremy happily describes Christmas days where hangi in the morning were often complemented by a huge island feed at night. But things obviously aren’t always this festive, or simple.

“I’ve witnessed my share of casual racism within both groups and have even experienced internalised racism throughout my personal journey. Ignorant people say ignorant things. I think most mixed race kids have no choice but to forge their own identity.”

Ariana says we all have to overcome the fact that nothing is black and white when it comes to culture. “It’s fluid, and there are a great many things we can learn from each other by sharing and communing together which will break down barriers and enrich our unique ways of life.”

But, at the end of the day, amid the contradictions, harmonies and tensions, the real question remains. Which team does a Sāmaori person support when Manu Samoa plays the All Blacks?

Jeremy’s answer? “Manu Samoa all day! I think my affinity for the underdog probably stems from being mixed race. Samoa don’t have the money or resources to pour into their rugby team like New Zealand does!”

Ariana is less enthusiastic. “Hahahaha WHO and WHO? I’m not much of a rugby fan.”

And me, personally? I emotionally watch both teams perform their haka and then hop in a cab, preferably headed somewhere unrelated to rugby. And, while I buckle up, I wait for those familiar words.