Māmari Stephens: Just what are we really commemorating with Rā Maumahara? 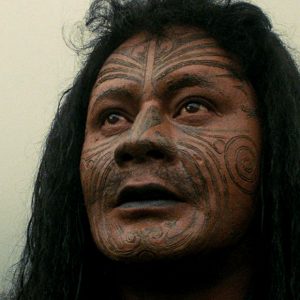 “Essential bloody viewing.” Anzac Wallace played Te Wheke in the film ‘Utu’.I have a jaundiced memory of going to ANZAC day parades when I was an Air Training Corps cadet in 1980s Christchurch: events that were dreary, cold and ill-attended. Small crowds would gather, outnumbering the veterans, but not by very much.

I remember a few more over the last couple of decades in Wellington as attendance at such services has swelled, and as solemnity has deepened. And always, my throat would tighten, and my vision would blur with unshed tears.

There is something very powerful in these observances. Perhaps it has been a deep sense of belonging to the same old tapestry as everyone around me — a warp and weft stretching back innumerable generations. But then, I’m a sucker for solemnity and ritual that creates meaning, even if the meaning is not always true.

And I’m not the only one. This state-sponsored national identity-making now reaches an ever-increasing cross-cultural, emotional crescendo at such times every year, even if only temporarily.

In our secular society, Anzac Day observance has surely replaced, for many, the public role once played by churches. On this day above all, commercials are banished in the morning, we stop, we bow our heads, reflect, and sometimes we even pray. In a country where the bare majority no longer holds Easter Sunday or Good Friday sacred, ANZAC Day has become perhaps the national sacred day of the year.

This phenomenon seems to be a welcome antidote to the usual self-induced and frankly, deliberate, historical amnesia of the majority. That any New Zealand history becomes a focal point of civic ritual is good.

On the other hand, the strength of this relatively recent, shiny narrative of togetherness has served to hide other less known and perhaps less palatable parts of our history.

For longer than any of us now on the planet have been alive, we have paid no national attention to the blood spilled and the stories dug into our own landscape and buried in our own shared genealogies from the New Zealand Wars, that tumultuous and bloody period of civil war, hard on the heels of the Musket Wars of the 1820s and ’30s, that periodically convulsed large swathes of the North Island between 1845 and the mid-1870s.

Officially, at least, that has now changed and the 28th of October this year marked the first official day of national commemoration of the New Zealand Wars, the new Rā Maumahara. The date also marks the anniversary of the signing of the Declaration of Independence in 1835.

Conversations and advocacy only apparently began in 2010/2011 to expand local commemorations, such as for the Battle of Ōrākau, to a nationwide event. Such efforts concluded successfully when Leah Bell and Waimarama Anderson and 12,000 others presented a petition to parliament in 2015 seeking to establish a national day of commemoration of the wars.

While those efforts were successful, the wars are still not to be included as a compulsory subject in the school curriculum.

As a part of the new Rā Maumahara, the Ōtaki community has the current opportunity to rewatch the 1998 New Zealand Wars documentary series over the course of several weeks at the Māoriland Hub. Watching this series again has reminded me that just as much as our ANZAC story, the New Zealand Wars, too, gave rise to a powerful set of stories that has done much to eradicate or twist understanding of Māori history in this country beyond the truth.

The first episode of the series deals with the Northern War, comprising a series of battles, including Puketutu, Ōhaeawai, and Ruapekapeka, kicked off by Hone Heke felling the flagstaff four times at Kororāreka in 1844–5.

The end result of which could not arguably be seen as a decisive and true Imperial/British victory over the Māori. What this war did do, was provide a petri dish for the development of colonial and Imperial propaganda. Governor Grey was able, after Ruapekapeka, to use the new newspaper media to claim that he and the 1300 Imperial troops (aided by some 400 Māori allies) had brought peace and safety to the North.

The reality was different. As the settler F. E. Manning put it in 1846:

“… anyone to read Despard’s despatches would think that we had thrashed the natives soundly whereas really they have had the best of us on several occasions. I really begin to think that it is perhaps all a mistake about us beating the French at Waterloo. I shall always for the rest of my life be cautious how I believe an account of a battle.”

So should we all be. In the year 2017 when “fake news” made Collins Dictionary’s Word of the Year, it pays to remember how quickly wars become instruments of propaganda.

One aspect of the accounts of the Northern War is the extent to which this particular conflict was a war of symbolism. When Hone Heke was chopping down the flagstaff, he was, as is obvious, attacking the flag itself as a symbol of British sovereignty. It therefore matters, when peace broke out, that the flagstaff was not re-erected by the colonial regime at all, as the missionary Henry Williams noted:

“The flagstaff in the Bay is still prostrate, and the natives here rule. These are humiliating facts to the proud Englishman, many of whom thought they could govern by a mere name.”

It also matters that Grey and the rest of the “government” of the day didn’t punish the “rebels”, as was to happen with increasing ferocity in other wars. Simply put, in the 1840s, there probably wasn’t the kind of deep infrastructure and buy-in from Northern Māori that could enforce any such punishments.

It took many decades to persuade Māori of the relevance of new courts and other legal institutions, including parliament, to Māori life — a project not complete arguably until the late 19th century, or even well beyond.

The Northern Wars reveal something of the mere beginning of that mission. Subsequent wars reveal even more.

There’s a scene at the end of the movie Utu that says something very profound about the nature of the conflict that those wars conducted over law, including tikanga, that I never noticed in all the other times I have seen it.

If you haven’t seen this film, by the way, find a way. Essential bloody viewing. Have a read of Danny Keenan’s excellent essay here on the way this movie tells the story of our “reel” history as opposed to our “real” history.

In summary, the story is set in the 1870s, at the tail end of the major conflicts of the New Zealand Wars. Te Wheke (played by Anzac Wallace), who had been fighting with colonial troops, comes upon his home village, shortly after it’s been attacked by the Armed Constabulary. Te Wheke commences a campaign of destruction and murder of Pākehā settlers. The Armed Constabulary then pursues him, assisted by Wiremu (played by Wi Kuki Kaa).

Anyway … to the scene in question. Imagine, if you will …

Te Wheke faces a supposed court martial at the very end of the film. He has been captured by the Constabulary. He is being “tried” for his crimes. Proceedings take place by firelight, in the bush, in the back of beyond, in the wops. Five people are present who want to deliver justice upon Te Wheke, the prisoner.

First to step forward is Corporal Jones, the last ranking officer standing — the young man who believes he has, in 1870s New Zealand, the authority and might of The Law behind him. He believes that he, of everyone present, has the right to execute Te Wheke. Except … he doesn’t. Not out here. In this wild place, he’s just a callow youth in a grubby uniform.

Matu (played by the extraordinary Merata Mita) then claims the right, by way of utu, to execute Te Wheke because he beat her cousin Kura to death. Then Williamson, the farmer, steps forward to claim the right to avenge the death of his wife caused by Te Wheke.

There is an impasse: so many competing claims to “rightness” and due process of “law”. Until Wiremu steps forward, removes his cap and reveals himself to be the brother of Te Wheke — shocking all but Te Wheke himself.

One by one, he discounts the others’ spurious claims to authority. The corporal, he mused, was Kura’s lover, and thus has no standing, no impartiality and no privilege of position. So much for him. Matu’s claim is spurious. She’s not even a member of Te Wheke’s own tribe, and a woman to boot. Williamson, as the wronged husband, similarly could be no bringer of justice to Te Wheke.

Instead, the only person with a legal claim to execute Te Wheke was Wiremu himself. Te Wheke had created a circle of death that could not be resolved by Te Wheke alone, or any exercise of spurious colonial law.

Only Wiremu could break the circle. Blood of Te Wheke’s blood, with no hatred or grudge, but with mana sufficient to see Te Wheke take the final journey of all spirits. Only someone of Wiremu’s mana and bloodline could uphold his brother’s mana, and bring matters back to equilibrium and completion. The two hongi. Wiremu carries out the execution, as was tika, correct in law. Equilibrium returned for that moment. And credits roll.

This is one of the few scenes I can recall in any New Zealand movie that teases out so subtly and truly, the nature of the conflict of laws between Māori and Pākehā, albeit through the lens of a Pākehā director and scriptwriter. A conflict that was, as much as anything else, at the heart of the New Zealand Wars.

So, as we grow into our annual civic commemorations of the New Zealand Wars: what exactly is it that we will be commemorating?

Whose understandings, which symbols, which meanings will rise to the top in this new civic project?

I would hope that we could commemorate the wars with a degree of understanding about the ambivalence and multi-layered complexity of these conflicts. There can be no safe and singular interpretation, and we should resist the temptation to create one. These wars were not a simple matter of good vs evil — our ancestors come from all sides of the blood shed.