Joanna Kidman: Should we destroy the monuments of our colonial past? 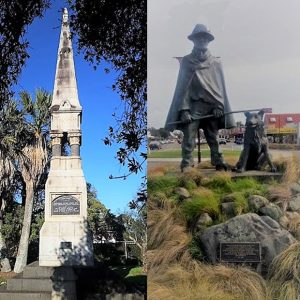 Not long ago, a group of graduate students had an impassioned discussion about an obelisk. It was a late winter afternoon and we were in my office watching storm clouds gathering over Wellington Harbour in the distance.

After a vaguely meteorological debate about the likelihood of getting to the bus stop before the rain set in, the conversation turned to a recent news item about a controversial memorial in a small South Auckland reserve at the junction of Māngere and Great South Roads.

The memorial commemorates Lieutenant-Colonel Marmaduke George Nixon and three men under his command who died during the 1863-64 invasion of the Waikato. On the east face of the monument, a plaque bears the words:

In memory of the brave men who served their Queen and Country in the Māori War. Waikato Campaign 1864.

Yet, behind this seemingly innocuous praise is a terrible history and one that is remembered very differently by Māori. Marmaduke George Nixon, a resident of Māngere and member of parliament, was in fact responsible for committing some of the worst atrocities of the Waikato War.

On 21 February 1864, he led a surprise attack on the undefended village of Rangiaowhia — a pā that was a few kilometres east of Te Awamutu. During the attack, Nixon and his men burned down whare where the inhabitants — all non-combatants including women, children and elderly Māori — had taken shelter. Others were killed as they fled for their lives or tried to surrender.

It was a defining moment in an invasion that teemed with defining moments. This was violence so brutally and callously rendered that its reverberations across time carry a kind of poisonous half-life.

Today, Ngāti Apakura and Ngāti Hinetū descendants, along with other Waikato-Tainui and King Country iwi, still remember and grieve. This is history at the sharp edges of memory.

At the time of our discussion, Nixon’s South Auckland memorial was the subject of public debate, with some people calling for its removal. Others would like the plaques that appear on the obelisk to be rewritten to reflect Māori accounts of Nixon’s actions at Rangiaowhia. Some others suggest that Māori should put up their own separate monument.

The Auckland Council has decided that for the time being, the obelisk will remain where it is — at the gateway to the Waikato — on the very same road that Nixon and his militia travelled on their way from Māngere to Rangiaowhia, 153 years ago.

The students’ discussion about the Nixon memorial stayed with me as I drove home later that evening and I was still thinking about it the following day. They each had very different ideas about what should happen to the monument and they became increasingly animated as the debate progressed.

Nowadays, these kinds of conversations are happening more frequently and more publicly in different parts of the world. In America, following widespread public protest, many statues of confederate leaders have been removed. At Oxford University, a statue of Cecil Rhodes at Oriel College was the subject of a “Rhodes Must Fall” campaign, as students called for universities to decolonise their public image as well as their curricula.

One might wonder about the point of all these memorials and monuments and statues.

Practically every town in New Zealand has its own war memorial commemorating local men who died in combat abroad.

Each time I visit the small Wairarapa town of Greytown, I walk down the Avenue of Remembrance. This is a tree-lined avenue in a Memorial Park dedicated to local men who died in World War One. It is a beautiful place that changes with the seasons.

Other kinds of public memory endure in statues and sculptures as well. A few weeks ago, in the centre of Feilding, I saw a statue of a stern-looking drover and his dog. The plaque described it as:

A grateful tribute to the shepherds, stockmen and drovers and all who have worked with the land and who for over a century have been the lifeblood of Feilding and district: AD 2003.

Historical memory in public life is produced in these artefacts. We tend to attach our memories to things we can see or touch. Any museum curator will tell you that. Our allegiances are often triggered by the tangible and the material.

But there is also great anxiety about the past and how it is remembered. Public debates about colonial memorials highlight a jittery unease about who and what should be remembered in New Zealand. These are also debates about who should control particular narratives about the nation and its history.

On the centenary of the battle of Gallipoli, for example, the government opened a National War Memorial Park in Wellington. The ceremonies, attended by the prime minister, his officials, and a variety of celebrities and local dignitaries, were broadcast on national television. The Anzac Day Dawn Service at the state-funded park, which had cost around $120-million to build, attracted an estimated 40,000 people, and roads around the city had to be closed to accommodate the crowds.

By contrast, the commemoration of colonial assaults on indigenous communities in New Zealand are less well-publicised, and few politicians ever turn up to stand alongside Māori to remember the violent and bloody attacks carried out on our own shores.

In 2013, on the 150th anniversary of the military invasion of Rangiriri, for example, only one politician, Te Ururoa Flavell, a member of the Māori Party, was present. Nor were those events widely televised, and although well attended by Māori and other local people, they did not attract the same crowds.

It has been said that how we remember the past —  and what we choose to forget —  is highly organised and strategic.

I am a Māori woman who weeps when I hear the words, Ōrākau, Rangiaowhia, Rangiriri, Meremere: this tragic roll call of almost incomprehensible pain and loss. When I drive down Great South Road to the Waikato, I imagine the beat of horses’ hooves and the tramp of soldiers’ boots — and I feel a catch in my throat.

I think the New Zealand public craves heroic colonial narratives because the violence of the past is otherwise, quite simply, unbearable.

But, please, let’s choose our heroes — and our redemption narratives — wisely.

I think what I wanted to say to the students is that these stone monsters live among us. They stand in the shade of public parks and civic squares and small roadside reserves, and they are constantly in the public eye. After all, we pass by them every day.

But as part of our daily scenery, we often stop remembering what they stood for when they lived, and what they did. Their past deeds feed on our ability to eventually stop seeing them — our collective forgetfulness, and our willingness to believe that the past is over and done with.

Whether the Nixon obelisk remains or not, those monuments to colonial war “heroes” and those other stone men on their sandstone plinths are part of a terrible story. But it is our story. Whether we like it or not, we have become part of each other’s history.

This column is an edited version of a blog which was originally published here.