We’re not alone in opposing the TPPA 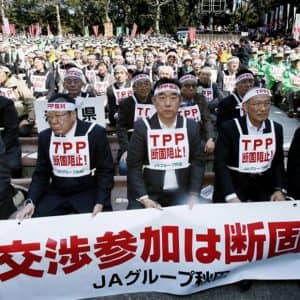 You’d think that, moving about in the biggest city in the world, you’d struggle for space on the pavement. But that wasn’t so in Tokyo, despite a population of 13 million.

People are respectful, considerate and quiet. Even when school kids jump into a subway carriage, they whisper. I didn’t see, let alone hear, one person on their mobile phone — and we spent a good hunk of our days on trains. Every time the uniformed ticket master entered and exited a carriage on the famous bullet train, he bowed deeply to passengers, even if they were facing away from him.

God, I thought, we’re a noisy, crass bunch compared to the Japanese. My two mates from Korea and Malaysia reckoned their lot are much the same.

We were guests of the People’s Action Against TPP. They’d wanted us to explain to ordinary Japanese why ordinary people in our countries oppose the TPPA (Trans-Pacific Partnership Agreement). We arrived in Japan just as their chief TPP negotiator had resigned, amid allegations of corruption.

Fauwaz Abdul Aziz is a researcher with an international non-governmental organisation called Third World Network, a research, policy and advocacy group. This young father-of-three was a journalist, but a fascination for trade and economics led him into advocacy work. He’s based in Malaysia, where his key focus now is the TPPA.

Jung Tae-in was the former secretary for economic affairs to the 16th President of South Korea. When his boss started negotiating the Korean-US Free Trade Agreement, Jung saw the writing on the wall. He resigned and became its most active opponent.

In case you don’t know, Koreans are the rock stars of the protest movement. They’re passionate, committed and very well organised. I saw them in action during protests in Hong Kong against the World Trade Organisation. Let’s just say it’s better to be behind them than facing them head on.

Jung said the masses kicked up a helluva stink over that FTA. At one protest, there were around 100,000 on the streets. Opposition MPs took to the door of a parliamentary committee room with a sledgehammer, sick of the secrecy around the talks. And, get this, one MP even set off a canister of tear gas in parliament in an attempt to stop the ruling party ratifying the bill.

They were concerned about the same controversial elements that can now be found within the TPPA. And that’s why Jung was invited to speak in Japan.

Our host was the delightful Yasuo Kondo — a retired businessman, exporter and agricultural journalist. Kondo-san worked out he’d visited 82 countries in his 70 years. He had an excellent grasp of English and was totally up with the play on the TPPA and FTAs.

As with New Zealand, TPPA negotiations in Malaysia and Japan were secret. And conducted in English. As soon as the Japanese government released the TPPA text, Kondo-san began translating the State Owned Enterprises chapter into Japanese. It took around six weeks. On the exact day Kondo completed his translation, the Japanese government released its version. Kondo could tell right away that some concepts were “lost in translation”.

He contacted the ministry to let them know. No reply.

My three companions and I were joined at the hip for a week as we travelled to Yamagata, Osaka, Kyoto and Tokyo for the TPPA symposium. It was full on. The only glimpse I had of snow-laden Yamagata was from the window of my tiny room on the 24th floor. Otherwise it was trains, planes, conference rooms and restaurants.

In Kyoto, we were delighted to see so many females in traditional costume. I asked a bevy of young kimono-clad women to pose for a photograph. They looked surprised. Not as surprised as Jung and Kondo, who overheard them talking.

“They’re Korean,” whispered Jung. “They rent kimono so they can wander around and feel Japanese for a day.”

Nothing is what it seems. I guess that sums up the TPPA.

I mentioned a tweet from a National MP praising the projected rise in GDP, citing a particular study. My mates laid their chopsticks down and patiently explained how the research is based on arbitrary assumptions.

“It assumes there is full employment and an equal distribution of resources,” said Fauwaz. “In Malaysia, there is already great inequality and that will increase under the TPPA because most benefits will accrue to a smaller group.”

As a professor of economics at Auckland University, Tim Hazledine, has written, “the economic analysis was belated and insultingly perfunctory”.

Apart from those concerns, the reasons behind TPPA opposition in Japan and Malaysia are the same as ours. These have been well articulated for the New Zealand context in a series of expert, peer-reviewed analyses covering off economics, environment, investment, Te Tiriti, local government, and sovereignty issues.

Masahiko Yamada, a former Minister of Agriculture, Forestry and Fisheries, is leading a lawsuit by 1063 politicians, artists, farmers and NGOs against the Japanese government — on the grounds that bypassing public consultation and the Diet (their parliament) has violated fundamental democratic and human rights enshrined in the constitution.

I met Mr Yamada after my first speech. He knows Jane Kelsey well, and was so inspired by New Zealand’s opposition movement, he couldn’t stop smiling and wouldn’t let go of my hand.

And these are not huggy people.

In Yamagata, farmers traipsed in wearing their gumboots while local producers sold their sauces and soaps at a stall in the foyer. The big audience also included horticulturalists and members of food co-operatives and collectives all worried that the rich will get richer and the US will be the biggest beneficiary.

Yoshihide Kanno farms free-range eggs and is co-chair of the People’s Action Against TPP. One of the tallest men I’ve ever met, Kanno-san was arrested in the 70s as a student, for protesting against the government seizure of farms to build Narita Airport. A few protesters still remain. The airport was built around them.

Kanno-san told me that farmers in Japan currently supply around 40 percent of the domestic market. They’re terrified that if their tariffs are lifted, it’ll drop to 14 percent. While a particular wing of the farmers’ sector supports the government, others have joined the lawsuit.

In Osaka, trade unions and small businesses work together to survive against Japanese-owned, multinational corporations pushing to reduce workers’ conditions. I asked the union leaders and companies if they had a message for ordinary New Zealanders.

“For Japanese and New Zealand workers, the situation is the same,” said Kazuhide Yamamoto, chairman of All Japan Dockworkers Union. “We are opposed to the neo-liberalist policies our governments are promoting through the TPPA, where profit from ordinary people goes to the capitalists. We must struggle beyond borders, beyond ethnicities, beyond nationalism and stand together as workers.”

That was translated from Japanese into Korean, into English. Not easy. Sake helped.

At each gathering, I began with a waiata, then a long mihi in Japanese. Through an interpreter, I talked about our unique rights as tangata whenua, which were reaffirmed by the Treaty and the United Nations Declaration on the Rights of Indigenous Peoples. I explained Māori were guaranteed protection over land, fisheries and all things precious.

I referred to the Waitangi Tribunal observation that with every international agreement, the ability of the government to meet its Treaty obligation to protect Māori rights is eroded. I told them about how the Tribunal directed the Crown to engage “actively” and “meaningfully” with Māori at the outset. None of which happened. I said that a key concern for Māori is a further dilution of our sovereignty rights.

But mainly I talked about traditional Māori values and beliefs, our cultural and spiritual responsibilities and obligations. And how those are diametrically opposed to the ideology underlying the TPPA.

Some said that hearing a specific indigenous response to the TPPA was a revelation, and touched them deeply. Others admitted they hadn’t considered including the indigenous Ainu people or the Okinawa sovereignty movement in the TPPA conversation and would now reach out.

On 4 February, I watched the Queen St march online. It was inspiring and emotional. Yes, I sighed when some people couldn’t articulate why they were marching. But I sighed louder hearing others, including Māori, blindly spouting the government line and convinced that the Exception Clause will save the day.

Our Waitangi claim will actually test that.

It’s clear there are uncertainties around the definitions and interpretations of various phrases. It appears the exception may only be used in defence of an allegation that New Zealand has breached the TPPA. Which means, first, our government must identify a particular issue as undermining Māori treaty rights (which the Crown accepts it is obliged to protect), and then be willing to invoke the exception clause.

Once again, Māori are relying on the goodwill of our government.

Next month, our claim goes back to the Waitangi Tribunal. The Governor General is considering a petition calling for a referendum. The Parliamentary Select Committee on Foreign Affairs, Defence and Trade is receiving submissions until 11 March on the TPPA.

Our job is to keep the pressure on them to incorporate alternative analyses into that report and to keep on at opposition MPs.

It’s important that we all continue analysing and sharing information, especially while the government is running its “consultation” round.

And to realise that we are not alone. People from all walks of life, in Japan, Malaysia and even the US, are making a stand.

I ran into a former All Black, Tamati Ellison, at the airport in Tokyo. We chatted about how Jamie Joseph is heading to Japan, how wonderful Japanese kai is, how punctual and respectful people are. The hotel receptionist was polite even when she said I couldn’t use the hotel spa unless I covered my moko. Tamati has to wear skins to cover his puhoro. Apparently, it’s all about gangs. I put up a weak protest to the lady but Tamati and I both agreed, “When in Rome …”

Tamati asked why I was in Japan. I told him. He wanted to know what the TPPA was all about.

“Pass the wasabi, then …