Tonga — an incubator for world rugby 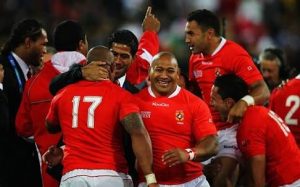 There are many people — and not just Pacific Islanders — who’ve been disappointed that our teams didn’t do much better in the early stages of this Rugby World Cup.

Fiji, Samoa and Tonga all finished their four matches of pool play without qualifying for the quarter-finals this weekend. That’s because they managed only one win each. Those results were a sad let-down when we had such high hopes for them this time.

But we shouldn’t be whingeing, complaining or commiserating. There’s much to celebrate about PI rugby. And rugby league, too.

Take Tonga, for example. There were Tongan players in eight of the 20 teams competing in the Rugby World Cup. For a small nation (with a home-based population of not much more than 100,000) that was already a victory.

Of course, we Tongans flew the flag whenever our national team turned out. But, when the US played, we cheered for them too, because they had a Tongan in the team. Likewise with Japan, England and Wales. Even Romania. And, of course, the All Backs, even though the sole Tongan in the AB squad this time has been Malakai Fekitoa. Then there’s Australia with four Tongans, which may be almost enough to overcome our standard Kiwi dislike of the Wallabies.

That widespread representation is a big step forward from where we were 20 years ago.

The reality is that the Tongan brand has been growing, and there’s scope for much more profitable and pleasurable growth internationally.

What we need to do, though, is avoid being small-minded — and stop assuming that our one and only priority is to develop our rugby talent just for our national team.

The fact is, for our talented young footballers, there are commercial opportunities to sell their skills to overseas buyers from wealthy clubs or franchises in Europe, Japan, Australia, New Zealand or other more exotic locations.

Tonga is too small to match their sort of money to keep our talent at home. And why would we even want to? If our players can strike a profitable deal with an overseas buyer, we all win. It’s a win for the sport if our rugby exports help make the game a more exciting spectacle — and a win for our folks if more money flows into more Tongan hands.

There’s a bonus, too, because, if more of our players are getting professional experience overseas — and, if they feel indebted to Tonga for the support and encouragement they’ve had in landing those contracts — they’re more likely to feel an allegiance to Tonga and be keen to represent their country when the Rugby World Cup rolls around again in another four years. And that means we’ll have a team that can no longer be seriously labelled as Minnows or Tier Two outfits.

The same goes for Samoa and Fiji. It applies to rugby league as well. It’s really just a matter of recognising that sporting skill is an exportable commodity — and that our Pacific countries have a big international future as incubators of that talent.

That’s what Shane Jones seems to have in mind in Fiji. He’s New Zealand’s ambassador for Pacific economic development — and recently, he invested $600,000 in Fiji on a pilot project to provide pastoral care and support for the sporting talent that Fiji has already been exporting.

That’s exactly what Tonga needs. And, I’m sure, Samoa as well. It’s the kind of project that could be multiplied 10, 15 or 20 times over the next few years

I can see it applying, for example, to the 30 to 40 Tongan boys already playing schoolboy rugby in New Zealand. They need someone keeping an eye on them while they’re away from home so they don’t feel lost or unsupported, and so that they succeed in the classroom as well as on the sports field. That would be a common-sense recognition that sport doesn’t take you all the way through life.

Although the RWC contenders are being whittled down from eight teams to four this weekend, we still have a number of Pacific players on display. So there’ll be much to admire — and much more in the future if Operation Incubator can kick in.