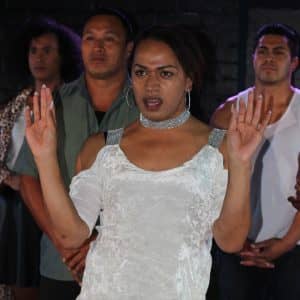 Early this year I was looking for an actress to play Shalimar Seiuli — the young American Samoan fa’afafine who was infamously pulled over in a car with Eddie Murphy early one morning in Los Angeles, in 1997.

A year later she was dead — and it was this that led me to write a play called Girl on a Corner, where Shalimar got to tell her version of events.

I knew the actress playing Shalimar had to be transgender. I knew she had to be good enough to carry an entire play on her shoulders. And I knew she had to have the guts to swear like a trooper in Samoan and yet be vulnerable enough to let the audience share Shalimar’s joy — and, more importantly, her pain.

In the end, I picked Amanaki Prescott-Faletau, a Tongan graduate of the Pacific Institute of Performing Arts (PIPA) in Auckland. She is what Tongans call fakaleiti or fakafefine, and Samoans fa’afafine. Meaning, like a lady — like a woman.

Casting her was a leap of faith. Nothing I had seen her do before this indicated that she could hit all the notes that Shalimar had to hit.

The result? Metro magazine called her “utterly charismatic.” The transgender reviewer, Lexie Matheson, praised her “simply outstanding … towering performance” on GayNZ.com. And in the 2015 Auckland Fringe Festival awards, Amanaki took out the gong for Best Performance.

She may not yet be at the same level as Orange is the New Black’s Laverne Cox, who made history as the first transgender cover girl on Time magazine last year. But it’s clear that the 26-year-old is on her way.

This year, aside from her award-winning turn in Girl on a Corner, she wowed audiences in Freak Show, an acclaimed dance piece by Fine Fatale. She was part of the PIPA posse who welcomed the All Blacks to Samoa for their historic match. And she acted opposite Robbie Magasiva in another play of mine, Club Paradiso, where she played a young fakaleiti subjected to the sadistic whims of Magasiva’s P-fuelled character.

Last month, she won an award (Best Play for the Young) from Playmarket, the national playwriting agency for Inky Pinky Ponky, which she co-wrote with a fellow PIPA graduate, Leki Jackson-Bourke, and which was produced this year by the Auckland Theatre Company.

Amanaki is one of a number of exciting and gifted young Pacific and Maori artists who I see as the future of New Zealand theatre. Last week, I sat down with her and asked her about her background and her life, which hasn’t always been so rosy. 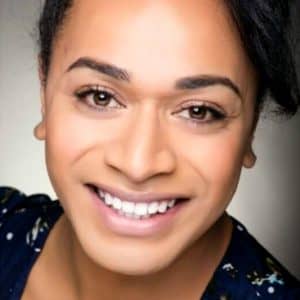 I grew up in Mt Roskill in a traditional Tongan family. Dad is a mechanic and Mum is a tailor. I’m one of 13 siblings, but four of them are my cousins who I call my siblings as we grew up together in the same house.

I know my way around a car. I’m the one to change a tyre. I’m the one who’ll be in a car with someone and go: “You need new brakes.” Or: “Your car’s on overdrive — hit this button.” I can sew, too, but not that well.

I heard the word fakaleiti before I heard “trans” or “faggot”. People started saying “half girl, half boy”.

I didn’t know I was different till I was five. Growing up, I always thought I was normal until I started getting hassled about the way I walked and talked. That’s what made me think something was wrong with me — because I was getting treated differently.

I was told to walk properly by my elders. Speak properly. At first I was confused: “What do you mean?” It wasn’t until they were specific: “Talk like a man. Walk like a man.” There were times when I would leave a room and they would call me back to do it again until they thought I looked manly enough.

After a while, the way they were saying it made me feel angry — sad — frustrated.

Growing up there was no fakaleiti that I knew of who I could talk to or relate to.

I ripped up all my childhood photos. I didn’t want them to be seen because they are ugly — because they are photos of me in boy clothes with short hair. There’s a few I haven’t been able to rip up, but those ones I hide.

I went to Lynfield College in Auckland. The first few years of school I hated it because I’d get mocked. Those high school years were probably the worst years of my life. I didn’t have siblings with me because we went to different high schools.

I had to wear a boy’s school uniform, but I would wear hoop earrings in defiance.

High school got better for me after I entered a school talent quest in Year 11, when I was 15. I did a solo dance piece. I was scared, but after that performance all the haters turned into fans. People just started smiling at me and talking to me. Then I was asked to lead the school dance group when we entered the Bring It On competition for high schools.

Before that I was dancing in my bedroom to J. Lo, Janet Jackson, Toni Braxton, Michael Jackson, Beyonce. I remember I did a talent quest in primary school with my sisters and we won.

I actually went all the way to the top of the hip-hop nationals. I went to Las Vegas in 2008 to compete in the hip-hop world championships, then again with my crew in 2011.

How did you find your way into acting and writing?

After high school, I worked at McDonalds, then Footlocker in Newmarket. And then I auditioned for PIPA in 2010 because one of my best friends, Mario Faumui, had done the course and I thought it would help me with my dance career.

On my first day, Letti (Goretti Chadwick, the head of operations at PIPA) made it very clear that no one was to use the word “faggot” and that everyone was meant to look after our faka and fafa — and if any of us were getting bullied out of school, it was the boys’ job to look after us.

Letti was also the first person to ever consider me a “she” without me even calling myself a “she”.

The first class, she was like: “Boys on this side, girls on that side,” and I went to the boys’ side. She was like: “What are you doing? Get on the girls’ side.”

I was furious to start with. But when I went home, I broke down. I didn’t realise until then that inside I felt like I was at home. It felt so good to sit with girls and be considered the same as them without having to explain myself.

Doing the PIPA course is the best decision I’ve ever made because it helped me figure out who I was, it gave me confidence, and it’s given me work. I made heaps of friends that are now like my family and school is now like a second home. Everyone calls me the princess of the school.

My family was afraid I wouldn’t make it, or get money out of it, but they’re okay with it now. My parents were trying to protect me from the world because they were scared I’d get hurt by people either verbally harassing me on social media or getting hidings because I am amazing. (She laughs.) 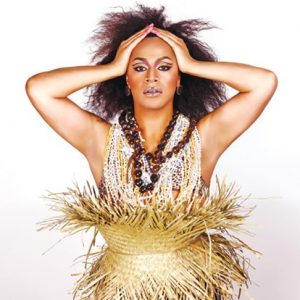 You auditioned as a dancer but now you also act and write.

Dancing is my go-to when I feel like I need to express myself without boundaries.

With acting I get to be someone else and sometimes do things I wouldn’t actually do in real life, let alone in front of an audience.

And writing is a way of me creating my own shows if I don’t get hired so I’ve always got something to lean on.

I’m still trying to figure out the writing. I wasn’t very good at that when I was at school. I’m still not!

It’s based on something similar that happened to me at high school.

Right now, I’m working on adapting the play Miss Understood, which was written last year by Thomas Sandsbury with help from me, Mario Faumui, and (arts laureate) Rachel House. It was written for the stage, and now Thomas, Rachel, Leki Jackson-Bourke, and I are adapting it into a film.

What was it like playing Shalimar in Girl on the Corner?

It was a challenge. All the lines — and playing a character that existed, and wanting to do my best at giving truth to the character and honouring her.

It brought up some things for me. I related to her goal to finally have a sex change, her relationship with her family, and the church aspect.

It reminds me, I need to tell my sisters to make sure I’m in a dress when they bury me. (In real life and in the play, Shalimar was buried in a man’s suit.) What a waste — going through life trying to convince the world I’m a female and then have my family bury me in a suit.

What’s your dream role as an actress?

I auditioned for a role on Shortland Street. I didn’t get the part but I was like: “Oh my gosh — finally there’s a possibility of having a trans character on there.”

There have been small trans roles on Kiwi films and TV shows before but only roles where the girls were hilarious — funny characters, as opposed to a normal girl with normal issues.

That’s my dream role: just a normal girl with normal issues. You know, relationship issues. Love issues. Something like Romeo and Juliet. I would love to play Juliet.

Also in e-tangata: About A Girl by Moana Maniapoto