Max Harris – a visionary worth following 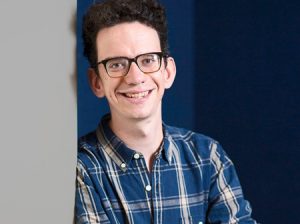 Max Harris is a good bloke who has written a book. He doesn’t need me to repeat all his other achievements for him. (You can read about him here and here.) Bridget Williams Books launched the new book last week, where, quite literally, people were spilling out of the doors. That is not typical of book launches I’ve been to.

The New Zealand Project is a heartfelt, wide-ranging, intelligent and idiosyncratic tour de force, whereby Max distills pearls of wisdom from interviews he conducted with at least 30 deep thinkers from across and beyond New Zealand’s political, economic, cultural and social landscape.

He mixes those pearls with his own insights, creating a kind of idealistic but somehow still possible agenda for making Aotearoa New Zealand a better place.

At the heart of Max’s focus is his call for a return to values in the public sphere. As he states in The New Zealand Project:

It is difficult to define values. I understand them to be principles that we hold dear that contribute to a life well led. A values-based politics, then, is a politics (in the activist and electoral spheres) that is motivated by values and that seeks to give effect to values through political action. It is related to, and inspired by, Māori approaches to ethics, life and collective action, which place values at the centre of behaviour and decision-making. (Emphasis added.)

His position is that New Zealand has abandoned a set of values that kept our society functional. With this abandonment of positive and implicitly agreed values, New Zealand had been left, as a nation, with the cold comforts of arch-pragmatism, growing individualism and self-interest.

This isn’t a new charge, and was expressed by Chris Trotter in 1975, somewhat prophetically over 40 years ago, at a time when there was both gloomy pessimism about New Zealand’s future, and a grassroots political movement to return values to politics.

Chris’s poem, written during the electoral run-up to the Muldoon era, shows that the stripping away of civic values can’t be blamed solely on the rise of neoliberalism since the late 1970s. Indeed, punitive pragmatism has been in the New Zealand psyche for a long time — and our social welfare system and our criminal justice system are soaked in it.

According to Max, in his modern vision, we need to once more orientate our actions and our policies according to a set of commonly understood values, collected under the headings Community, Care and Creativity. In addition, Max identifies Love as another value that should inform our politics, how we deal with each other, and how we develop as a society.

Importantly, Max pays specific attention to Māori values — and that takes the potential of his work in a refreshing direction. (Although it has to be said, the expression of Māori values in politics is hardly new.)

I have aimed to suggest, with humility and tentativeness (and as far as possible drawing on Māori voices such as those of Mikaere, Moana Jackson, Kim Workman, and others), that Māori values have much to offer New Zealand politics and society. Te ao Māori and tikanga Māori provide us with a model of the very idea of a values-based politics, […]. Specific Māori values like whanaungatanga, manaakitanga and auahatanga can enrich our understandings of the progressive values underpinning this book: community, care and creativity. Aroha underpins and deepens the notion of a politics of love […].

Tikanga Māori — the first law of Aotearoa — remains an important foundation and model for how politics should be done in the present.

I’m also interested in Max’s earlier statement that Māori “place values at the centre of behaviour and decision-making.”

Do we? I’m always a little uneasy about identifying values that we as Māori ought to uphold or should infuse our decisions with.

What we value certainly can shape our actions, and our actions thereby reflect our values. However, I think values emerge from what we really do. I’m less sure that statements about values alone are truly honest.

I think they can be useful as a kind of confirmation, or even a kind of rallying cry. And there is something to be said about identifying values that we want to live by. But merely saying we operate according to principles of manaakitanga doesn’t make it so.

There’s another problem in my view with identifying values that are good and “contribute to a life well led”. Setting values also brings the risk of failure by establishing a set of standards that we will, more likely than not, fail.

There is a reason why our criminal legal system, and indeed Māori legal precepts, both as codes for human behaviour, concentrate on punishing us for what we do or fail to do. It is just too difficult and intrusive to punish us for what we are and what we have failed to be.

Yet, arguably, identifying core values to live by sets exactly these kinds of unachievable standards. Truly, we are not worthy.

On the other hand, I can see how our policy and law can be different if we seek to implement a set of values in their design. Imagine how different New Zealand law could have been if collective rangatiratanga had been a pre-eminent value of the New Zealand state instead of individual autonomy of the property owner?

This foray into the matter of Māori values in politics, no matter how genuine, also inevitably raises questions about the person making the claim for such values. Here’s a good example of such a question, on Twitter, on the day Max’s book was launched:

I like Max Harris & his work. I also think we should talk abt why we listen when clever white men say things Māori have been saying for years.

It’s a good question. Max’s advocacy of Māori values appears to be well-received by those who like what he’s doing, and his approach appears to be genuine and without arrogance. And I, for one, greatly prefer Pākehā who engage properly (and not thievingly) with Māori concepts and issues, rather than throwing their hands in the air, relegating such matters to the “too hard” basket.

But it’s also true that Māori and Pasifika have not been particularly involved in the public discourse about his work thus far.

And it’s true that Māori have been talking about values-based politics for a long time. The creation of the Mana and Māori parties are testament to that public and private debate.

So part of the problem identified by Tweeter Marianne Elliot’s question is not so much that Māori, for example, are not contributing to, or taking part in, debates about values and other issues of national importance. They bloody well are.

Of course, here we get into familiar territory. The scarcity of Māori and Pasifika public voices in mainstream media is one of the very reasons we have e-Tangata, I might add, and why so much respect must go to Tapu Misa and Gary Wilson for working so hard to create a window which places Māori and Pasifika naturally within the frame.

But Marianne’s criticism of Max seems also to be about the fact that he is at the podium in the first place. It seems to me that Max is establishing himself, to some degree, as a kind of public intellectual, someone who sits outside societal institutions, offering not only a reasoned critique of those institutions but also generating ideas as to how those institutions and society as a whole, can be better.

This kind of figure has a long and respectable history in Western civilisation, and in New Zealand, notwithstanding our famed (and probably over-hyped) anti-intellectualism.

Speaking in regards to Māori, there is no shortage of Māori intellectual giants dotting our landscape, no lack of a Māori intellectual tradition. Ranginui Walker, Moana Jackson, Donna Awatere-Huata, Dun Mihaka, and Linda Tuhiwai Smith have all provided strong voices and charismas, with identifiable intellectual positions and challenges to the mainstream, not reliant on any academic institution to provide a platform.

All these thinkers (and more besides) have provided a foundation for others to build on. Their work doesn’t end with them.

Yet it does seem relatively rare for Māori to claim such general public space simply as a matter of right and entitlement. I know plenty of extraordinary young Māori thinkers, but I’d struggle to think of any who would do what Max is doing just yet.

Perhaps Māori intellectualism is simply done differently. Perhaps it requires a longer gestation period, due to more community checks and balances. It’s difficult for rangatahi to stand in such a space without being called a tamaiti mōhio (know-it-all kid) or ihu hupe (“snot-nose”, similar to “wet-behind-the-ears”) by others in their communities.

Maybe Māori intellectuals also simply work differently. Perhaps they work within communities, rather than without them, naturally seeking less approval from mainstream forums. Doubtless there will be many possible answers.

In the meantime, congratulations are due to extraordinary individuals such as Max, and others as yet less feted, who are brave enough to fashion a vision, with no clear sense of whether anyone will follow. The hope is that at least some of us will. We need more, not fewer such ihu-hupe.