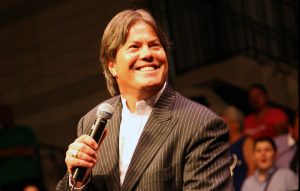 A few years ago, I visited Destiny Church in my hometown of Rotorua. It was my sister’s church and definitely not my cup of tea. I was a critic. But I couldn’t deny the positive impact of the church in her life.

I’ve never been a great fan of Brian Tamaki, either, but I’ve been astounded by the outpouring of hatred and vitriol towards “the Bishop” over the past few weeks.

While there are valid questions over some of his theological views on homosexuality, the media attention (29 articles in the Herald alone), social media outcry, and online petition to strip the church of its tax-free status, has seemed disproportionate and unfair to me.

And it has obscured what Destiny is really about — an indigenous-led church that’s helping Māori families turn their lives around.

But a balanced discussion seems to have been drowned out by the simplistic accusation of gay hatred. Tamaki’s own defence — that he doesn’t hate gays, has good friends who are gay, and that they are welcome in his church — fell on deaf ears. As did Hannah Tamaki’s tweet: “I have gay family & friends … I tell them I love them.”

Even the public endorsement of an openly gay friend did little to calm the storm. Jevan Goulter told the New Zealand Herald: “I respect him as a person, I disagree with his view but I’m not going to write off the 35 years of work he has done with the people in his community or null and void a friendship.”

Peter Lineham, an associate professor of history at Massey University who wrote about Destiny in his 2013 book Destiny: The Life and Times of a Self-made Apostle, has a more nuanced view than most. He’s also gay — and told Stuff that, while pleasant to deal with on a personal level, Brian Tamaki maintains a Bible-based judgment of homosexuality. “He’s perfectly courteous and accepting of individuals, but disapproves of gay people as a whole on principle.”

Brian Tamaki is hardly alone in viewing homosexuality as a sin. In fact, among those who hold to the belief that the Bible is the literal word of God — including Pentecostalists and other conservative Christians in mainline churches — it’s a fairly standard view. Many conservative Jews and Muslims also hold this position.

And yet, as far as I know, no one is campaigning to revoke the tax-exempt status of any other church with this view.

The other issue that caused an outcry is the perception that Brian Tamaki has made himself wealthy at the expense of his poor congregants. I don’t know the state of Tamaki’s bank account, so it’s hard to know how true this is, but I do wonder why other wealthy tithe-teaching Pentecostal preachers don’t receive the same opprobrium.

A cursory survey of Destiny accounts reveals that the amounts involved are relatively modest. The largest of their churches in Auckland had a total gross income of $2,204,742 in 2015, which covered the wages of 23 full-time employees and six part-timers, plus all operations. By comparison, another Auckland Pentecostal church, City Impact, had a total gross income of $15,293,828 in the same year, with 66 full-time workers and 65 part-time workers.

Sure, Tamaki has invited controversy through actions like the anti-civil union “Enough is Enough” march to parliament, and the false prophesy of ruling New Zealand. And many also consider him a cult leader. But, while certainly audacious, Tamaki is not the first self-styled Māori prophetic type to fall foul of mainstream consensus. Nor is he the first to lead a large congregation of predominantly Māori followers.

As Peter Lineham has written: “Destiny stands in the tradition of Māori religious movements, including Ringatū, Ratana and many smaller groups … In this tradition indigenous churches are motivated by a vision for the future of the Māori people; this vision combines religion and politics and is committed to transforming the condition of Māori people. Such churches are profoundly concerned at the depravity and decline of the Māori community.”

Destiny members have been caricatured as poor, ignorant victims. But no one is forced to attend the church. It seems to me that they attend (and pay their tithes) because there’s something in it for them. They like the aspirational message: that they don’t have to stay in the brown poverty box. That they can reach for something more, just as their leaders have done.

For many Māori, Destiny Church feels culturally comfortable. The vibe is Māori-friendly — it’s relaxed, happy, upbeat, “whānau, whānau”. The music is great: it’s like attending a rock concert. There’s a feeling of belonging. And the respect shown towards leaders is also culturally comfortable. In fact, the payment of a tithe is not that different from the obligation to give a koha, as part of shouldering one’s responsibility as whānau. In Māori circles, this is often a matter of pride. Destiny feels like a tribe of sorts — urban and slick. And it has its chief.

After the recent controversy, I asked my sister what she thought of it all. She told me:

“Most of us have come to God busted and disgusted, a menace to society, druggies, alcoholics, abusers of all sorts. And the longer we sit under the preached word, we learn and grow and develop a relationship with Jesus. Lots of people are now business owners, teachers, social workers, making a difference in society.”

Perhaps a Māori high school dropout from Te Awamutu with an alcoholic father is not meant to make it big on the national stage. Becoming wealthy and enjoying that wealth doesn’t fit the “brown box” image. Although Brian Tamaki started life on a similar track to his father, becoming a father as a teenager, he has risen above that beginning in life and done well for himself. And he’s still married to the mother of that child.

Tamaki has been cheap click-bait for some and a chance to gain virtue-signalling brownie points for others. As for the haters? The dark underbelly of New Zealand’s tall poppy syndrome means “haters gonna hate”. Certainly, Tamaki’s message is a perceived threat to the gay community, as it cuts to the core of their identity. But, if Destiny’s social media pages is any indication of what they’re really about, preaching against homosexuality is not what defines the church. As Peter Lineham has stated, their emphasis is on improving life for their Māori followers.

Brian Tamaki and supporters like Stan Walker, who spoke at a Destiny event last weekend, tell a similar story about fathers who failed, alcohol abuse, drug abuse, domestic violence and incarceration. Women tell of their husband’s lives being changed for the better. A daughter speaks of being re-united with a father she’d never met. The message is transformational.

The Man Up campaign, which Destiny is promoting, has a goal to reach out to Māori “brothers” and support them to become better fathers and husbands. The image of 700 Māori men standing outside Wiri prison, calling for a change to the lives of their incarcerated brothers, singing the hymn He Honore, He Korooria and performing the haka, sends a powerful message. No less the image of a group of men, some of them members of rival gangs, being baptised together and embracing. Powerful, indeed!

The fallout over Brian Tamaki’s message seems to be an example of how we can live in parallel universes in New Zealand. The call to strip Destiny of its charitable status is driven by the agenda of one sector of society against another. But the petition seems misguided given the good work Destiny achieves among it own people.

As an indigenous-led and directed movement, Destiny is working to achieve positive outcomes for Māori. It has an undeniable ability to reach struggling Māori with a message that is not only aspirational, but also transformational.

In the early 19th century, it was Māori, freed from the bondage of physical as well as spiritual slavery, who reached other Māori with a redemptive message. The Man Up movement of Māori men reaching other Māori men has historical precedent. The message — Raising fathers to save our children — is desperately needed in our communities.

Why would anyone want to interfere with that?

Sheree Trotter (Te Arawa) is a PhD History candidate at the University of Auckland.