Whistling in the Dark 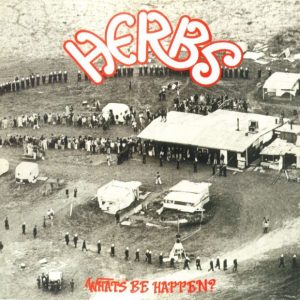 The 80s are a bit hazy. Not sure if it’s fading memory or simply a lack of sleep throughout that decade. But what with all the student parties, clubbing, assignment deadlines, protest marches, sit-ins and rallies, there was still one constant.

I first saw Herbs when they opened for Stevie Wonder at Western Springs. It was early 1981. The rain was so bad, a bunch of guys came on to the stage and poked giant poles up into the sagging canopy to release water pooling in it.

Now when you’re standing in a foot of mud in pounding rain waiting for the main star, you do tend to forget your manners. Much later on in life, I would come to understand how daunting it is for an unknown artist to open for the main act. The arrival of Herbs on to the stage that night was met with indifference in some quarters, and outright hostility from others.

And then something magical happened.

Somehow their particular rhythms conjured up blue skies and sun on your face. The lyrics made us perk up. And their superb harmonies were tight and familiar, the kind you’d heard the weekend before at the party in your own garage. The way I remember it, Herbs finally left the stage to rapturous applause.

Enter The Superstar, who proceeded to wipe the smile off our faces by telling us to hold on to our tickets. His concert would be postponed until the following night. I lost a lot of love for Stevie then. Scrambling around in the mud for my dropped ticket, I fumed at the injustice of exposing our locals to possible electrocution, but not The American.

Mind you, Herbs have always been a tough bunch. Not a wuss among them. You only had to look at the cover of their 1981 debut EP Whats’ Be Happen? The image of cops surrounding the occupation of Bastion Point firmly locates this collection of songs in Aotearoa. If in doubt, just listen to the lyrics.

It was Toni Fonoti (who wrote four of the six songs) who came up with the Samoan street slang title of the album. The lyrics to the title track include a quick shout out to the Pacific. “Sing that song, Talofa Lava, that Samoan song. (Māori, of course, were hanging out for our bit.) “Sing that song… (And, we’d all yell at the top of our lungs ‘kia ora!’)…that Māori song!”

This jovial groove with a distinctive Pacific feel packed a lyrical wallop that hadn’t been heard before. Hugh Lynn, the concert promoter in those days, says this was the first band to come out and say something. “It was exciting really because if you listened to it, it was the street talking to you.”

There was a Black Panthers connection too, as Toni explains. He says the phrase “whistling in the dark” originally came from the leader of the Black Panthers in the States – and he was talking about how it’s a part of “trying to feel comfortable in a society which is not yours, where you’re not the dominant society. You’re the small fish trying to get out.”

Last week, 34 years later, Independent Music NZ officially recognised Whats’ Be Happen? as a landmark recording that “continues to inspire.” And the recognition came with Herbs being awarded the Taite Classic Prize.

(That prize, by the way, gets its name from the late Dylan Taite who was, for many years, our best music journalist.)

Actually, the genesis of Herbs goes back to the 1970s when Toni Fonoti was into soul and R&B, like Chaka Khan, Marvin Gaye and Earth, Wind & Fire. He started a band called Backyard, with Fred Faleauto (drums), Spencer Fusimalohi (guitar) and David Pou (bass). By the time they scored a residency at the Trident Tavern in Onehunga, Bob Marley had come and gone and the band was moving into reggae territory – and with it, stories that reflected the home front.

After all, the 70s was about persecution and protest. It was a time when a new generation of young, media-savvy activists grabbed the headlines. Nga Tamatoa and the Polynesian Panthers were leading the fight for basic human rights – legal aid, prisoner aid, homework centres, workers rights, youth rights, Maori language, the Treaty, an end to the dawn raids, and “not one acre more.”

Toni also felt the vibe of first nations uprising around the world. He had a vision for a different kind of band, one that would be a voice for the Pacific. That worked for Will ‘Ilolahia, co-founder of the Polynesian Panthers. Will, who was a cousin of Spencer Fusimalohi, had hook-ups all over the place.

He’d been an organiser in the Panthers and had managed Alec Hawke’s band Papa so he says “it wasn’t a stretch to start managing Herbs.” Dilworth Karaka was in Papa, so Will pulled him into Herbs.

In 1980, Will and Ross France, a lawyer/musician, sat the band down at Tangaroa College, where David Pou was the woodwork teacher. Nowadays we’d call it a “strategic planning meeting”.

Ross, who knew Danny Keighley (the Sweetwaters promoter), says the vision was around writing original songs and “getting a place on the main stage at Sweetwaters.”

It was Toni who came up with the name Herbs, and it had nothing to do with oregano. The band nailed the pub circuit and packed in the crowds. But their crowds were smokers, not drinkers. Bar takings weren’t flash. The pubs got antsy. So the band toured marae and small communities, which often meant playing for koha. Locals would turn up with stuff that had “nothing-to-do-with-oregano”. The band would on-sell it to make ends meet.

As per their plan, Herbs took their new songs on to the big stage at Sweetwaters. Enter Hugh Lynn, one of the most powerful figures in the music industry – and Ngāti Porou to boot. Hugh owned Mascot Studios, Warrior Records, Eden Security and was all across the big-ticket events of the 70s and 80s as a concert promoter. He liked what he heard. At the Taite Awards, Hugh described his considerable investment into Herbs as “social profit”. In other words, kaupapa-driven. Hugh had Herbs open for most international touring acts – and they were regularly first-choice openers.

Phil also co-wrote Reggae’s Doing Fine with Toni. The two actually met after that Stevie Wonder concert, when Toni’s car broke down outside Phil’s house. John Berkley, who designed the band’s logo, was about to leave, so Toni drafted in Phil on bass. Toni wrote the stunning Dragons & Demons as well as Whistling in the Dark, which referred to police harassment of Pacific islanders.

(Will says “the actual whistle melody is what we used on the streets to signal the cops were coming.”)

It was Ross France who wrote Azania (Soon Come) and it was released on the eve of the 1981 Springbok Tour. And he recalls his “proudest WBH moment” was hearing an anti-tour demonstration pick up the chant from “Azania (Soon Come).”

“It wasn’t subtle,” says Ross. “But at least we knew what side we were on.”

The album received little radio airplay. It didn’t fly off the shelves and I’m not sure the reviews were much chop either. But, a year later, Will figured out which music stores charted songs. So he organised buy-outs from those shops to push the band’s first single French Letter up into the charts, where it stayed for 11 weeks without radio airplay.

Then, in the spirit of whanaungatanga, Will passed on his “insider-trading” knowledge to Dalvanius, who was recording Poi E. The rest is history.

A year after the WBH release, Phil Toms left the band, followed by Toni Fonoti, a former Mormon but by now a committed Rastafarian. So began a constant switch of players, a change in sound, and more albums – with some hits and some misses. Dilworth Karaka is the only remaining original and the face of Herbs to those who came to the band later on.

To my mind, the Taite Classic Prize is about acknowledging the whakapapa of music in this country by celebrating musical landmarks, stuff that made a difference. Herbs certainly made a difference to Ngahiwi Apanui and his band Aotearoa.

He says they were “hugely influenced by the pre-Long Ago Herbs and, in particular, by the songs penned by Toni Fonoti. It wasn’t so much about following them into the Pacific space but, I suppose, about being similar in the Maori space.”

Aotearoa tackled topical issues in their 1986 debut album Tihei Mauri Ora in a way that was unashamedly Maori, bi-lingual and more militant in my opinion. Ngahiwi and Aotearoa influenced my own song-writing. And so it continues.

Toni, Fred, Spencer, Dilworth, Phil Thoms, as well as Ross, Hugh, Phil Yule and Will, we thank you.

Whats’ Be Happen? Heaps. That’s what.