Give it a go and learn from your mistakes 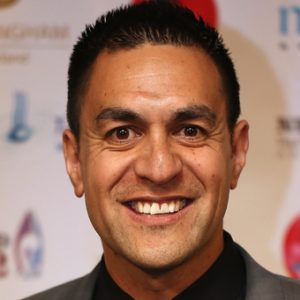 Julian Wilcox was the most familiar face and voice of the Māori Television Service for the channel’s first 10 years. He has now stepped back from front-line broadcasting and is lending Ngāi Tahu a hand as their communications manager. Here he explains his approach to te reo Māori.

More than 100 years ago, Mark Twain came up with the observation that you need only ignorance and confidence to succeed in life. And that, more or less, has been my formula in learning te reo Māori – having no idea what I was doing, but giving it a crack anyway.

I suspect that, for many second language learners, giving it a crack is fraught with fear because, you’re afraid of what might happen if you say something wrong. It’s even worse for those tāne Māori who wanna be a Wharehuia Milroy after their first day in class.

The problem is we tend to ridicule rather than recognise someone who is giving it a go. So I can understand the inclination to clam-up. Also, we tend not to embrace people who appear to be overly self-assured. That can, as I know from experience, result  in a language journey that is a seriously tough grind.

But there’s really nothing wrong with being wrong.  And there’s no shame in others knowing that we’ve stuffed up. Voltaire, a French writer, had some views on that issue long before Mark Twain was dispensing his wisdom. Voltaire said (in French I suspect) that “we are all formed of frailty and error”. So he urged us “to pardon reciprocally each other’s folly.” In fact, he said that’s “the first law of nature”.

I remember my first year learning te reo, in the third form at Te Aute College, with our teacher Enoka Munro. Enoka was a great story teller, who could split an apple with his thumb, hand out daily detentions like they were lollies and could deviate from the daily learning plan on a whim to regale us with how massive the eels were at Whakakī not far from Wairoa. He was also my first real teacher of te reo. And I wanted to impress him.

After our first written te reo test, three of us were the top of the class. Lance Wesche, Eden Whaanga (now Te Amorangi Kireka-Whaanga, the head of the Aotearoa Māori Muslim Association) and me.

By chance, in that class, we sat in alphabetical order, so Lance, Eden and I were grouped together near one side of the room. The rest of the class smelled a rat because of our good marks. And deservedly so because Lance was pretty clever, Eden was a good reader – and my peripheral vision was second to none.

I could sense that our classmates were building up to a flood of accusations about our reo racket, so I took a gamble. I decided that I could confirm and display my impeccable te reo credentials by choosing to utter my next sentence entirely in Māori.

As it happened, this coincided with my urgent need to relieve myself. I grabbed my copy of Te Rangatahi 1, looked up the word for toilet, proceeded to Enoka’s table at the front of the class, waited till I had the attention of everyone in the room, and announced: “He wharepaku ahau.”

You could have heard a pin drop. I assumed this was due to my exquisite pronunciation and superlative sentence structure, the likes of which Māoridom had never seen nor heard before. Unfortunately, the grin on Enoka’s face, followed by his booming laugh, indicated that my announcement may possibly have had a defect.

The sad reality was that, despite my Te Rangatahi research, and despite my care with the grammar, I hadn’t announced that I was off to the toilet. Instead, I was saying: I am a toilet.

Through the years, I may have taken that advice a little too seriously. I would frequently, yet unconsciously, blaze a reo trail rife with new words and new pronunciations that couldn’t help but baffle both me and the listener. Even today, there are unkind folk who say (and believe) that’s still the case.

But I’ve stuck to my commitment and I’ve kept trying to build and use my language arsenal – new vocabulary, structures, aphorisms, colloquial phrases, and various elements from different dialects. Anything, in fact, that I’ve been lucky enough to find within my reach.

Along the way, I’ve kept speaking as much as I could, for as long as I could – but never setting out to be God’s gift to te reo Māori. I’ve also welcomed the positive feedback and the criticisms whenever anyone cared enough to comment. And I’ve clung to my conviction that this is the most beautiful language in the world – and that I must make it mine.

Unfortunately, that has led to an assortment of wharepaku moments. For instance, I’ve had trouble with balls – mixing up my golf pōro and my own pōro, and doing so in public, all because of an incorrect possessive pronoun.

I’ve also tried slapping a couple of interesting passive endings on verbs and imperatives where they don’t belong. And, possibly like many reo learners before me, I’ve indulged in some gender reassignment surgery on my in-laws and made a hungawai out of a hungarei – and vice versa. But the mistakes don’t matter because the goal never changes. It’s to keep making progress.

Henare Kingi, the legendary Māori radio broadcaster gave me one piece of advice. It was “Whakaiti. Whakaiti. Whakaiti.”  My interpretation is that “through humility comes humanity.” The nuts and bolts of that mean we’ll all make mistakes learning te reo. So we just have to embrace that. Have the humanity to expect it. Have the humility to accept it. And have the confidence to learn from it.