Washday and other images 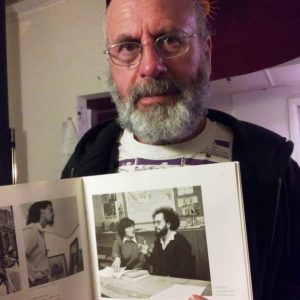 Piripi Whaanga with a photograph Ans Westra took of him, from Whaiora; The Pursuit of Life (1985).

Ans Westra arrived in New Zealand from the Netherlands in 1957, as a 21-year-old, to check out her dad who had migrated here. Photography wasn’t her specialty then. When Ans was doing her Diploma of Arts and Craft Teaching in Rotterdam, her main interest was artistic needlework. But, in due course, she settled down here and used a Rolleiflex camera to capture the images that caught her eye. Many of those images were of Maori – and a number have made such an impact that it was no surprise that, recently, Massey University awarded her an honorary doctorate in Fine Arts to go along with the many other awards she has won through the years. Piripi Whaanga recalls seeing her in action more than 30 years ago when he was editor of Tu Tangata, the Department of Maori Affairs magazine.

I remember her well from the 1980s because she was a familiar sight at Maori gatherings. A tall, blonde woman, hunched over her camera and intent on getting her shot.

She mostly worked with a portrait-style camera that meant she had to peer down, at waist level, into the lens viewer. It wasn’t the sort of camera that you held up to your eye. So, in a way, that made her less obtrusive – and more likely to capture people being natural and relaxed.

Ans came to New Zealand more than 50 years ago at a time when many Maori were adapting to Pakeha ways and facing social upheaval. She thought she should record those changes. And so began an unusual relationship between a photographer and a culture that has lasted all this time.

Those early photographs defined the Westra style – natural, un-posed shots of ordinary people. And they gained prominence and credibility through being featured in Te Ao Hou, the Department of Maori Affairs magazine, predecessor of Tu Tangata.

At this time, the government policy was officially one of integrating Maori into the Pakeha population but its policies, like “pepper-potting” Maori in State houses in white suburbs, suggested it was more a matter of assimilation. New Zealand governments wanted to promote social models for Maori to follow.

Back then, Margaret Orbell, the editor of Te Ao Hou, asked Ans to travel the country and photograph Maori as they came to grips with new Pakeha ways of doing things. Maori artists and writers featured heavily in the magazine as it fell to them to record Te Ao Hurihuri, this changing Maori world.

The Education Department, too, had need of a photographic record for its regular School Journal and the education of Maori whanau in Te Ao Hurihuri.  So Ans Westra was commissioned to go into the homes as well as the schools.

It was this time of challenge to old ways that brought the photographer into some controversy when some of her photos featured in a School Journal (a government publication) entitled “Washday at the Pa.”

In more than 40 pages of text and photographs, a rural family was shown with children playing around the home. Rural Maori housing had been sub-standard for some decades and government policy was belatedly making improvements, largely by relocating Maori in urban State housing. So most of the shots caught this period of rural living. One photograph of a new urban house was included.

The progressive Maori Women’s Welfare League protested that the publication was unhelpful and inaccurate in its portrayal of Maori living rough. The Minister of Education listened and all copies of the journal were withdrawn. At the time, Ans defended her documentary record and, in 1998, expanded on the original “Washday” story with fresh photos of three of the now grown-up children and their families, some of who still preferred basic home decoration such as no wallpaper.

Today, Ans Westra’s photographic record graces the Turnbull Archives and Te Papa – and her most recent award from Massey University suggests the dust has now settled over the accuracy and worth of what she saw through the camera lens.

The doctorate also confirms the status of her other photographic work. For instance Our Future Nga Tau ki Muri where her focus has been on the landscape and where she signals her impatience with the way New Zealand is being sold off.

Whaiora, a 1985 publication (text by Katerina Mataira), is one I’m more directly connected with because she included a couple of shots of me. Not that I can recall the pictures being taken because she was that unobtrusive. But there they are. One is with Matiu Rata at a Mana Motuhake conference at Waikawa Marae not far from Picton. And the other is at the Kuratini, Wellington Polytechnic with my tutor, Roimata Kirikiri.

Ans is on record saying that, from the 1970s on, more Maori challenged her role as a Pakeha capturing Maori images. In the early days, there wasn’t that criticism because Maori told her they couldn’t see a Maori girl doing that sort of work. They thought it would be too lonely travelling the country by herself.

Today, as a 79-year-old in her Wellington home, she’s surrounded by the evidence of that journey. Photography and art books abound as does the art hung and leaning on the walls.

I asked what she had first seen in Maori people and their culture and what changes she’d observed over time.

Maori, she said, had impressed her with their passion for life. But, after all her travels through the country, she felt sorry for the Maori world that was passing – and sorry, too, that Maori haven’t been immune to the pitfalls of a consumer society that’s now enveloping the land as well as the people.

She’s still in touch with that Maori world and, when I left her, she had just jotted down the location details about some photos in Whaiora that had been requested. She didn’t have her own copy because she’d probably given it away like the new copy of Nga Tau ki Muri that I took out the door.