Searching for a New Hawaiki in New York 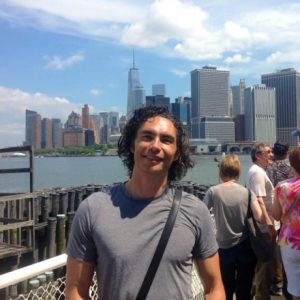 What is it that makes New York so addictive, so impossible to shake off once you’ve been there? At Soulfest recently I saw a sea of brown faces, Maori and Pacific Island faces and, judging from the apparel, a high number of New York Yankees and Brooklyn Nets fans. Yet I wonder how many know anything about these teams or the town that made them?

We know that New York is cool but why?  And why is it that no one goes there looking for our kith and kin, team ‘tangata whenua’? Instead, we go on a pilgrimage to the home of Biggie Smalls Notorious, Jay Z (named after Brooklyn’s J and Z train lines) and 50 cent.

And why is it sooo hard to convince our kids that having our very own language is cool, Maui is our All-star globe trotter and Hineruhi can out-kopikopi J-Lo from the Bronx (“Don’t be fooled by the rocks that I got, I’m still, I’m still Hine from the block”).

For four months I went on an art rez (residency) in the heart of Brooklyn in search of tangata whenua, with a firm belief that how a nation treats their first peoples is at the heart of their true identity. The stark truth is they had been purged to barren Oklahoma (half way across the States) fleeing their old ‘Hawaiki’ of Manhattan for a dusty land beyond their horizon. There are, however, still remnants of the Leni Lenape tribe in the hills of New Jersey. They have endured with a fascinating story of their own…

The Ramapough Hills, New Jersey, were once quite isolated and became home to some of the native Americans purged from Mannahatta (their original name for Manhattan). They then mixed with runaway black slaves, white renegades, and after the American Revolution, 400 concubines left by the evacuating British. The ‘tribe’ that has emerged has been subject to no end of stereotyping in popular films, such as ‘Out of the Furnace’ and ‘The Red Road”.

Many suffer from terrible cancers after decades of Ford dumping all their paint scum from a nearby automobile plant into their forests, contaminating their waterways. Capitalist Lesson learnt? If a company thinks it can get away with it, it will try.

New York bears little evidence that they were ever there. Yet, as the convergence of old and new worlds, it continues to seduce as the place to go to fulfill your elusive dreams. You can fly Lorde high and they will reward you but, for every success story like that, there are broken dreams and hundreds of tales of ‘what ifs’ and ‘also-rans’… just visit any bar and listen.

The American dream thrives and dives but continues to burn on, like a beacon of hope across the harbour… lady liberty or Gatsby’s doomed love… enticing you to return and fulfill your dream… the promise of a new Hawaiki, just beyond the horizon.

Brett’s auto­biog: “Brett Graham (Ngati Koroki Kahukura) is a practising artist. He practises a lot, because he doesn't know what he is doing. He won the sportsman award at Manurewa Central Primary School and the Divinity Prize at College. He currently teaches at Toi Hou Kura in Gisborne and lives at Waiuku, though isn't sure quite why.”

Brett's latest exhibition "Recalibrate" is on from 5-23 December at Two Rooms Gallery in Newton, Auckland. www.tworooms.co.nz