Mika puts his hard hat on and goes to work 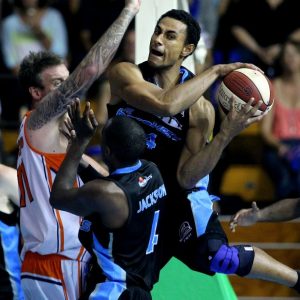 ‘I’ll have that.’ Mika Vukona in rebounding action against the Cairns Taipans in 2013. Photo: www.photosport.co.nz

Mika Vukona has just become the most-capped player in the 11-year history of the NZ Breakers basketball team. Rebounding is one of his real strengths – try 17 in one game last season, for example – and he’s the only Breaker to record the double of 1,500 points and 1,500 rebounds for the club.

In 2009, Mika won an ANBL premiership with the Souths Dragons, who were based in Melbourne. Then he returned to New Zealand and helped the Breakers to three championships. Perhaps just as tellingly, when the Breakers didn’t go so well last season, Mika was their Player of the Year.

Mika was born in Suva, Fiji, and is the captain of the Breakers and also the NZ Tall Blacks.

Just to be a banger, really. To go out there, set screens and get the rebounds. I look for offensive opportunities when they present themselves, but really my job is to put my hard hat on and go to work. That’s what it comes down to.

Is your attitude the same in your prep?

At trainings, I’m all in or I’m not in. I think you could ask the other guys and they’d say that.

When it comes to injuries, I don’t like to sit on the side-line and rehab. I’d rather just try and fight through it. Whether that’s a dumb thing to do, I don’t know. But it seems better for me just to continue playing. I’ve done it for so long that I think if I was to have a break, my body wouldn’t cope with it.

With that training attitude, has there been some friendly fire?

Well… there was one year when I took the same guy out three times at training. I mean, he ended up just sitting on the side-lines with crutches, bandaged knee, an eye patch…

I felt sorry for him, but…

Are you mates now?

Is he too scared to come near you?

He’s probably too pissed-off still. If he had the chance he’d probably run me down.

Do you remember much about growing up in Fiji?

Yeah, I do. I left there in 1987, when I was five, but I remember everything from running around in the village in Newtown to getting in trouble from my Bomboo [grandma].

It was a real extended family scene with lots of aunties and uncles. Everyone looked after you.

We lived with my grandma Anna Lemulemu, who was my dad’s mum, in her house. There was no granddad around and she ruled the roost. Everybody knew who she was.

Grandma used to do all the ice blocks for the village, so everyone used to come to our house. She had one of those big standalone freezers. It was a great time.

Can you tell us a bit about mum and dad?

I was adopted. My father now, if I wasn’t adopted, would be my uncle. He’s my birth mum’s brother.

When I was young, he returned to Fiji from New Zealand with his family. I got along really well with his son and, when it came time for them to leave, us boys didn’t want to get separated.

I was blessed that dad, Clem, made the choice to take me along. And not just myself, but my two younger sisters as well. The fact Fiji had the coup in 1987 made that an easier decision for the adults.

So I’m the middle of five kids. Above me there’s my brother Ilati and sister Yvonne, who’s the oldest. Below are my sisters Aima and Luana.

My mum – Clem’s wife Marion – is a Kiwi from Tauranga. She initially came over to Fiji as a teacher. When we left Fiji, we moved back to her part of the world.

What was it like adjusting to life in Tauranga?

I remember we had a massive backyard. Dad was a builder and he’d bring back a lot of fill and we turned it into a dirt bike track. There was an estuary nearby, too, where we spent a lot of time.

But it was more just trying to get used to New Zealand life, really. I get told I’d go to kindy or Bethlehem Primary and end up stealing the lunches. I had to understand that not everything was there to share.

I spoke fluent Fijian until about a year after I landed in New Zealand. I didn’t speak it after that and never have, which is a sad thing really.

It was nice to get back to Fiji occasionally – a lot of the family was still there – but many of them eventually came over to Tauranga. So we ended up having my cousins and their parents staying with us while I was growing up and it didn’t feel like I was away from Fiji that much. Soon I had in my mind that New Zealand was home.

You’re a big guy. I imagine junior rugby coaches would have had their eye on you?

I played rugby until I was in the third form at Bethlehem College, but that was it. Then mum said: ‘No rugby.’ So there was no rugby anymore. I was a little bit devastated by that but, you know how it goes, whatever mum says you just follow. It was the same rule for everybody in our family.

I picked up basketball more seriously after that. I’d played it a bit before, but my brother was playing it, so I followed him. Later I got offered a scholarship to go to Nelson College.

And Nelson would have been yet another world?

Yeah, definitely. At first I thought: ‘Oh no. What am I doing?’ But I had an opportunity.

Nenad Vucinic, who was the Tall Blacks coach, asked me to come down and be part of his basketball programme in Nelson. I’d never really taken basketball seriously until I went down there.

Nelson College was a great school in terms of bringing in a whole lot of Solomon Island kids, Tongan kids, Fijian kids…

When I found out that there were a lot of Pacific Islanders in the three boarding houses, it was an awesome feeling. There would be cultural days or nights, so you’d learn Solomon Islands dancing or whatever. Salvatore Gargiulo, the headmaster, did a great job with that.

And where has basketball taken you since?

There have been some top spots: Italy, France, Latvia, Lithuania, Finland, Poland…

The weirdest spot was Caracas in Venezuela. We were told we couldn’t open the curtains on the bus or the locals would try and kill us. We had about eight commandos on dirt bikes with AK47s and every other sort of gun on them helping us out. They trailed us everywhere we went. You weren’t allowed to leave the hotel without a bodyguard – and even then they discouraged it.

I went to Lebanon last year to play. You hear a lot of stories about the place, but it’s probably one of the most beautiful spots in the world: right on the Mediterranean, blue seas and everything. The people are great. You just have the occasional dust-up there.

How’s the body stood up to the challenges you’ve thrown at it?

It’s good. I’ve been blessed. I haven’t had any bad injuries apart from a broken hip.

There are lots of little niggles, like every sportsperson goes through, that test you at trainings and make you think: ‘Ah shit, do I really need to go through this?’

But at the end of the day, it’s like a drug. You just want to get out there and compete. And you see the younger guys, the 16-17 year-olds coming in and they’re trying to show a bit of what they have – and you want to stamp your little bit onto them.

You’re a family man. Can you tell us about your crew?

He’s just… he’s a boy, you know. He’s ripping everything up, fighting everybody, yelling at the top of his lungs. It’s awesome.

My wife Vanessa is from Dunedin. We met in Nelson. She came back from teaching in Korea, in 2002, to look after her mum, who was sick. Our paths just crossed. Five years later we got married.

What lessons have you learnt as an older athlete?

You can’t take on everybody.

I’m still pretty young for a basketballer though. I’m 32. I think I’ve got at least three great years ahead of me.

Can you shed some light on the art of rebounding?

You just need to want it more than the other person. That’s all it is.

can help you, because you can find out who shoots where and where the bounce of the ball goes, but most of the time it’s just fighting. Fighting to the death to get the ball ahead of the other person.

Have you taken a fair few elbows and things in the rebounding contest? Your face still looks fairly pretty.

It looked pretty terrible the week before my wedding. I had a game and got a black eye. It was all bulging. Then, that same week, I ended up playing in a tournament and got my two front teeth knocked out.

The wife wasn’t too happy, but we got replacement teeth and, with a little bit of make-up, we were able to patch things up all right.

I’m working on my IT degree. I’m half-way through that and hopefully in the next year or two I’ll finish it.

I’ve always been a bit of a nerd and just liked computers. Plus it’s a good thing, as I don’t think my body could handle anything else after basketball.

I’d like to get into coaching of some sort too. I never used to want to do that but, the older I get, the more I do.