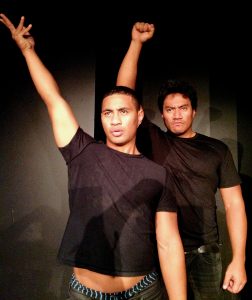 Beulah Koale is a Tangaroa College old boy who’s the eldest in a family of six. And he’s been hooked on acting ever since, at the age of 15, he got a taste of that world at a workshop run by Massive Company in Auckland.

Already he’s been able to tick off two big things on his dream list – a standing ovation in Edinburgh in a Victor Rodger play “Black Faggot”, and starring in the feature film “The Last Saint” which opened in Kiwi cinemas in late August.

What was it like performing “Black Faggot” in Edinburgh?

It’s not a play I thought I’d ever do. I’m from Otara. I’m from a very religious family. We frowned upon that.

Yeah. We were sucked into that world, frowning upon that, thinking that’s something you don’t do.

But what I figured out in Edinburgh, it’s not a play about being gay, it’s about being human.

How did the audiences respond in Edinburgh?

They loved it, we had really good houses every night. I was shocked! And not only gay people came. Couples, old people, we had people come back and bring their family.

I heard you had a standing ovation on your last night. Congratulations!

Yeah knowing I was on stage in a different country, in a building that was so… historical! Like it used to be a Sunday School. And thinking about all the millions of actors who have been there. I couldn’t believe we were in Scotland doing a play.

That was the moment I realised, I’m living the dream!

I read a comment you posted on Facebook about how you’d always dreamed about being in a movie, and watching it at the movies in Manukau. Sounds like you’re living a lot of your dreams at the moment!

Yeah I feel selfish and blessed that I could do both.

What was it like finally getting “The Last Saint” to the big screen, I know you’ve been involved with the project since you were 16.

Watching myself and seeing my people watch the film, I almost ate all the popcorn myself ’cause I was really nervous. I was welling up, just watching the audience respond in the first scene.

It’s amazing isn’t it, the feeling of being in amongst an audience like that. It’s like riding on a wave of other peoples’ feelings.

It was amazing! I was overwhelmed. I wanted to flip my chair the other way and watch the audience react. There’s always this one scene where Minka (Beulah’s character in the film) is watching his mum sleep. No words. He puts a blanket over her and kisses her forehead.

You can hear a pin drop, every time.

You started acting with Massive Company as a 15-year-old, and now you work for them as a tutor.  What drives you when you work with young people?

I always look for the person that used to be me. Scared, didn’t wanna talk to anyone, had no friends. I wanted to run away, I nearly left at lunchtime but I came back. I remember thinking “holy crap you’re looking in my eyes. That’s not normal”.

I don’t want people to waste their talent. And I always know that people before me always pushed me and wanted me to succeed. I just wanna do that, I wanna pay it forward.

That’s why I love working with young people.

I just mean do something in America, like a film or TV or whatever. I wanna open those doors.

I saw you at “The Dark Horse” premiere. Did you meet Cliff then?

I brushed my hand against his suit that night but I was too scared to say hello.

What are you doing next?

I’m starting rehearsals for “Sons” soon (Victor Rodger’s play). I was one year old when it first went up, I’ve heard a lot about that production and always wished I’d been old enough to be in that play. Now I get the chance to have a turn at it.